LA Opera continues its 2022/23 season at The Music Center with a revival of “Tosca,” Giacomo Puccini’s riveting drama of love, jealousy, depravity, and violence within a backdrop of religious and political turmoil.

Soprano Angel Blue captivates as Tosca with her range of vocal and emotional depth infused with a sweet charm and humor as she agonizes over her love and jealousy of the artist and political rebel Cavaradossi, performed with charm and fortitude by tenor Michael Fabiano while fending off the malevolent and cruel Scarpia, embodied by bass-baritone Ryan McKinny. 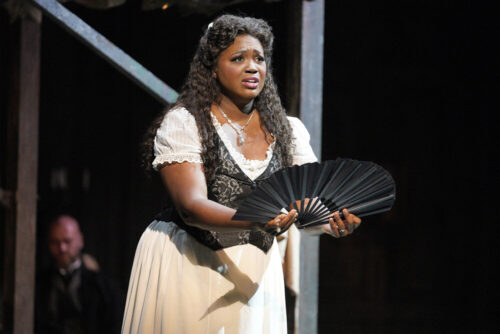 It is an opera, so the scale of the scenery is an integral element of the performance and Bunny Christie has designed astonishing sets, as well as costumes. Act I takes place in The Church of Sant’Andrea delle Valle where Cararadossi works high upon a scaffold painting an image of the Magdalane adjacent to the pews and altars of the church; Act II takes us to Baron Scarpia’s apartment at the Palazzo Farnese  adorned with a multitude of sculptures; and Act III we are on the stark roof of the Castel Sant’Angelo where prisoners meet their fate.

Louis Lohraseb conducts the LA Opera Orchestra with a joyful bravura through Puccini’s absorbing melodious score and leitmotif theme music that evokes what we familiarly hear in contemporary films. The accompanying on stage LA Chorus and Children’s Chorus wonderfully add their voices to the performance. 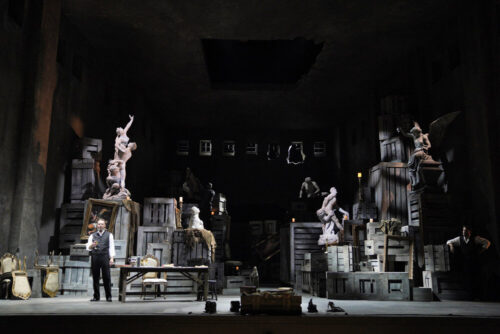 Tosca is considered a “ verismo” or realist style of opera that emerged in Italy in the 1890s and which typically depicted gritty plots and lower-class, contemporary characters and settings and a feel for natural speech. This style was criticized during Puccini’s time for minimizing the “bella canto” form that relied on the singing to drive the performance as a concert to what was a more theatrical approach.

Arrive an hour before the performance to hear a pre-performance talk by Dr. Kristi Brown-Montesano that provides historical background and creative interpretation of the opera.

Tosca is performed in Italian with English supertitles with an estimated running time of two hours and 40 minutes, including two 20-minute intermissions.

Los Angeles is a city of enormous diversity and creativity and LA Opera is dedicated to reflecting that vibrancy by redefining what opera can be.

For information on upcoming LA Opera performances, go to https://www.laopera.org/