“L.A. NOIR: A City Reimagined,” featuring the photography of Kenneth Locker, opened at Couturier Gallery on August 5, 2017. Offering a magniloquent overview of Hollywood and its environs, the solo exhibition focuses on the architecture of this modern city which often goes unnoticed in today’s world. Millennials, glued to their iPhones, are transfixed to social media deities such as the Kardashians, completely unaware of the history around them. 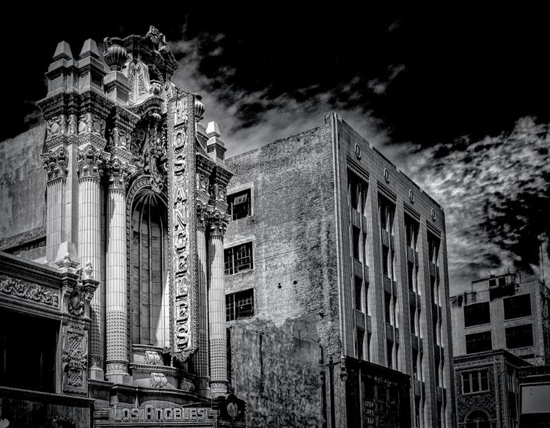 Locker relishes the mystery of our everyday cityscape. He pays tribute to another era, celebrating the grandeur of Hollywood with its bombastic designed buildings and attractions. These Los Angeles sites become stars in their own right. While the architecture plays a central role in the exhibition, Locker’s photography adds an elusive, yet sensual dimension…offering multiple layers of an ominous and foreboding essence. Locker is a skilled photographer, and his choice to expose the underbelly of a city while spotlighting its unrequited magnificence at the same time, is stirring.

I had the chance to speak with both the gallery director Darrel Couturier and the photographer Ken Locker. This is Locker’s first exhibition with the gallery. The photographer commented that Couturier Gallery is a great space to exhibit. “It is intimate, but doesn’t feel small or cramped. I love the very high ceilings…it feels like a New York City loft.” 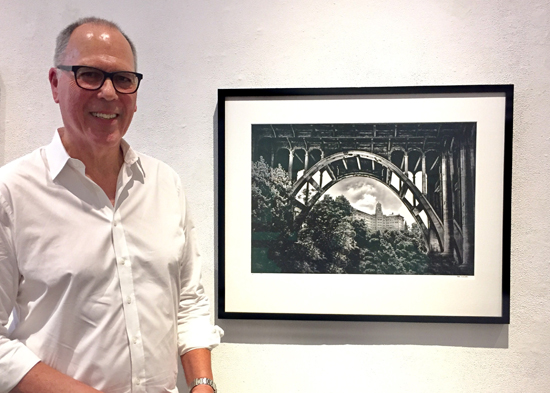 Couturier was impressed with the work. “I very much liked what I saw and thought it a fascinating interpretation of L.A. landmarks merged with the idea of film noir,” said the gallerist. “I thought it was visually fascinating, emotional, and timeless in the sense that though the photos were taken recently, Ken’s editing and printing process placed these images in another time.”

Locker added that Couturier is easy to work with. “He respects artists and has great insights in how to present and promote the work.” Having a father that loved photography (with an in-house darkroom) inspired the artist to start taking photos at very young age. “I was probably seven or eight when I took my first ‘serious’ photograph that I developed and printed myself (under my father’s supervision, of course).” Locker explained that he always loved architecture. “In college, I was debating whether to pursue architecture or photography. Photography won out.” He was also a fan of Noir literature and cited authors such as Raymond Chandler, James M. Cain, and Dashiell Hammet. that have made an impact on him. 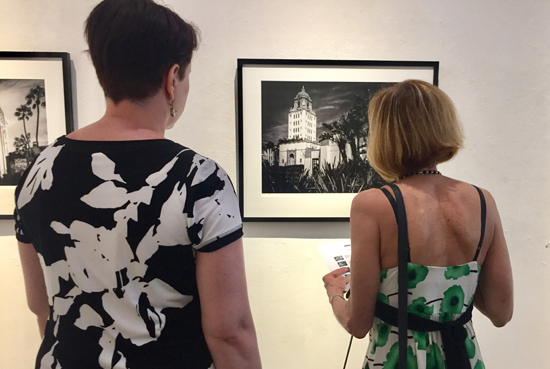 I asked Couturier what he looks for in the work of an artist. His response was, “Work that has brilliant craft, challenges the mind and eye, and has an aesthetic independent of its conceptual content.” He went on to say that Locker’s exhibition challenges the mind and evokes thought. “People who see the work always seem to have an emotional reaction as well as many questions as to where and when.”

As a viewer, I can say for sure it had an extraordinary effect on me. I highly recommend this exhibition….so be sure to stop in soon to Couturier Gallery. “L.A. NOIR: A City Reimagined” will remain on view through August 19, 2017.  http://www.couturiergallery.com/