The classic jazz trio is made up of piano, bass, and drums. It takes full advantage of swing, interaction, and dynamics and for the musician, there’s no place to hide and no limit on the imagination. Each musician has more musical possibilities and responsibilities and they must strike a delicate balance with each instrument needing to provide enough variety to keep the listeners interest. And, when a piano trio is performing at its best, it is truly a delight to behold. Such was the case when Joey Alexander’s trio returned to the Eli and Edythe Broad Stage in Santa Monica this week. 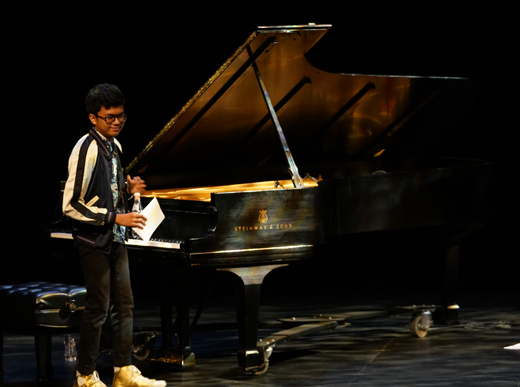 Joey Alexander takes the stage at the Broad Stage in Santa Monica; all photos by Richard Bilow (courtesy of LAAP)

Born in Bali in 2003, Joey Alexander taught himself to play the piano at 6, learning jazz from both his father and by listening at home to his dad’s large jazz record collection. His phenomenal talent caught the attention of a visiting Herbie Hancock and, then Wynton Marsalis. Marsalis helped the family relocate to New York City in 2014 and asked him to debut at Jazz at Lincoln Center. Appearances at the White House, Newport Jazz Festival, Grammy Awards, and a feature on “60 Minutes” soon followed. Since then, the 16-year-old has toured the world, released four albums and become a bona fide star.

At the Broad, the trio consisted of Joey Alexander (piano), Kris Funn (bass) and Kendrick Scott (drums). Of course each of the ‘supporting’ players are virtuosos, but, they are also bandleaders. Bassist Kris Funn graduated with honors from Howard University and has brought his immense skills to the bands of Kenny Garrett, Christian Scott, Nicholas Payton and Sean Jones and, in 2018, an album of his own compositions, Cornerstore. While drummer Scott is a consummate musician who attended the Berklee College of Music and has toured with Herbie Hancock, Charles Lloyd, The Crusaders, Kurt Rosenwinkel, Kurt Elling and Terence Blanchard. He has released four albums as a bandleader, including three with his group, Oracle a collective of young musicians. Their recent album A Wall Becomes a Bridge is their second for Blue Note records. 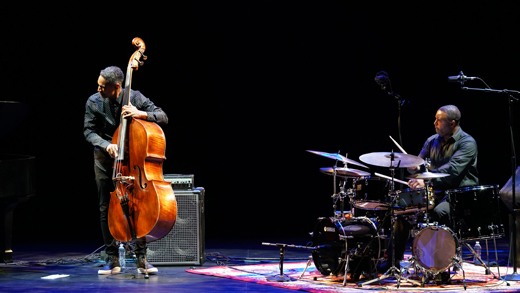 The show opened up with a bass solo by Kris Funn and then Scott joined on drums before Joey jumped in and the band broke into Alexander’s song “Faithful” from his latest release Eclipse. The song is in 5/8 and was composed in the unusual meter to reflect the uncertainty of his family’s journey. The song moved along with a hip groove and the rhythm section got it rolling. At first, Alexander played with quiet restraint before standing up and playing powerful runs.

The band then played another Alexander original “Bali” which opens Eclipse. The tune has a relaxed celebratory feel and a melody that provides some has nice interaction between the bass and the melody. The song’s Latin feel was a perfect setting for Alexander’s solo approach and after Funn’s mellow solo, Alexander played clear runs that were defined by clean phrasing and rhythm. He takes his time to build in intensity, developing and completing each melodic fragment before moving on to the next idea. 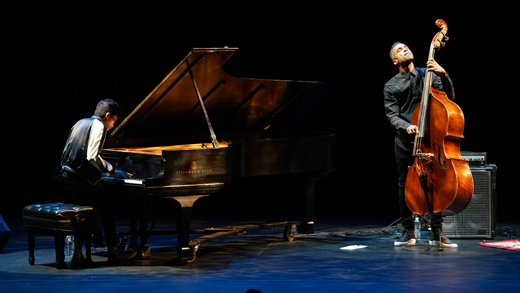 Alexander and bassist Kris Funn in a thoughtful mood.

After the opening numbers, Joey addressed the crowd with a broad smile wearing a track jacket, white shirt, white sneakers and tight dark jeans. “Thank you so much for coming,” he said with a slight charmed awkwardness that elicited a few laughs from the crowd. “It is really our pleasure to be playing the Broad again.” Then, he sat down and played the introspective “Soul Dreamer” the last track on his 2016 album Countdown and the first song wrote, when he was 10 years old. The song showcases the essence of Alexander’s musicianship in its effortless distinction between fast solo runs and impressive grace. For the most part, Alexander focused on his original compositions, however, a highlight of the set was Joe Henderson’s “Inner Urge” where Alexander focused on the tonal centers of the song.

Throughout the evening, Alexander performed with intense command and made the complicated jazz arrangements seem effortless. He extended his compliments frequently towards his bandmates who were obviously having fun and you could feel the joy in their playing. Bassist Funn is an exceptional bass player and fun to watch, but drummer Scott had so much up his sleeve that you couldn’t take your eyes off him. He often played just with his hands, he would hit the side of the drums for effect and he rubbed his sticks on the drum to create a scrapping sound that provided a unique and fitting accompaniment.

After a standing ovation, the band return to encore with the gospel-tinged “Sunday Waltz” from Countdown. As the band played and Joey began to solo, it became a little clearer how Joey credits his his ability as “a gift of God”. Still, it may be a gift, but a gift needs nurturing and Alexander seems to be on the right track with a good head on his shoulders and a maturity far beyond his years. With him as one of its guiding lights, the future of jazz looks bright and I look forward to continue to watch and marvel at his growth as an artist. Find out more about  whats happening at the Broad Stage – http://thebroadstage.org/