Returning last year, after an eight year hiatus, the 2017 Jazz at Drew Concert Series was held Saturday, October 7th on the campus of Charles R. Drew University of Medicine and Science (CDU). This year marked the 20th time the event has taken place. According to David M. Carlisle, MD, PhD, President and CEO of CDU, there are two goals for Jazz at Drew, “First, as a fundraiser, it helps support CDU student scholarships, services and campus facilities.  Second, as a concert, it provides South LA with a first-class entertainment event as part of our commitment to bring as many resources as we can to the community in which we live and work.” 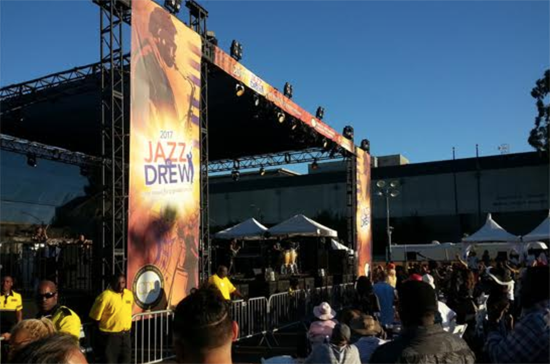 It hasn’t yet been stated how much money was raised, but I can unequivocally declare that they delivered on their first-class entertainment claim! Plus, the event was well organized with a small shopping bazaar, plenty of food/drink options and ample bathrooms.Jazz at Drew’s emphasis on showcasing homegrown talent with international appeal has been the distinguishing factor that separates the event from larger jazz festivals in Southern California. The home town community feel was evident from the start with the Honorable Maxine Waters seen walking through the crowd – giving everyone a smile and a wave to the crowd’s chants of “We love you Maxine.”The Fernando Pullum Community Arts Center Jazz Band opened the show. In addition to its top level youth jazz program, the center offers free performing arts classes to students 5 – 20. The jazz students got things going with their opening tune, Stevie Wonder’s classic “Isn’t She Lovely.” Then, West Coast Get Down members Kamasi Washington and Ryan Porter joined the band. While the elders provided the solos, the kids laid down an ample groove and provided an early highlight with a driving version of James Brown’s “Cold Sweat” which resonated with the crowd who were trying to get used to the 90+ degree heat.

Next up was veteran jazz and R&B singer Eloise Laws who is known to her fans simply at “El”. Ms. Laws is a member of the talented Laws family which includes brothers’ Hubert and Ronnie as well as sister Debra. The soulful, sophisticated singer started her set with “Last Days of Summer,” a song off her 1999 album The Key. The song emphasized her easy-going vocal style and her band’s potent chops. The focus on the heat continued with a sparkling version of Peggy Lee’s classic “Fever.” Throughout her set, El commanded a consummate stage presence that melted the crowd’s hearts and grabbed their attention with her passionate unique vocal style. A highlight of the set was El’s new single “Can’t Let Myself, Hurt Myself” – an authoritative and demonstration to the power and independence of the female spirit. She dedicated the song to all people, especially women.

Local Latin soul group DW3 took to the stage next. DW3 is short for Down With 3 and the three are Damon Reel, Eric Mondragon and Eric’s brother Billy. At the Drew, the trio was augmented by five superb musicians that added a lot of color (i.e., horns and percussion) and really filled out the sound – kudos to the C-Town horn section. Another shout out should go the group’s guitarist who was featured in a couple of songs and as guitar fans would say, “The dude can really shred.” The group played a set of upbeat originals showcasing their new album “On the Floor” which produced two chart topping singles for urban format and was produced by two-time Grammy Award Winner Paul Brown and Marcus Miller.The group has a lot of talent and I’m sure glad I found out about them at the show. If you want to hear the band play in an intimate setting, they have a biweekly gig every Thursdays and Sundays at Spaghettini Jazz Club in Seal Beach.

Around 3:30PM, The West Coast Get Down (WCGD) took the stage. For those of you not familiar with the band, the WCGD’s month-long recording session in 2012 is already the stuff of jazz legend. Inspired by their packed-house jam sessions at the Piano Bar in Hollywood, the group got together and rented out a Los Angeles studio for 30 days. The results became a landmark jazz record (Kamasi Washington’s The Epic) and two extraordinary albums (bassist Miles Mosley’s Uprising and Cameron Graves’ Planetary Prince). The latest album from trombonist Ryan Porter is also a result of that fruitful month, but, Porter had something different in mind – a children’s record entitled Spangle-Lang.

While the band often gets categorized as Kamasi Washington’s band; in fact, Washington — is a partner in the WCGD, not its leader. It’s an eight-man musical collective that seems not so much about removing the boundaries between genres as never recognizing them in the first place. Each player in the band is a virtuoso and has a unique approach to their instrument. While it used to be a weekly occurrence to see the band at the now defunct Piano Bar, times have changed. The well-earned success of Kamasi Washington and Miles Mosley has made them jazz superstars and has led to international tours. So, it is always a treat when they return home and they get the band back together and play live.

The band hit their stride on their second song, “The End of Corporatism” from Cameron Graves’ Planetary Prince. This piano driven tune with a memorable, melodic horn line gave everyone in the band ample opportunity to display their talent – I really loved watching the interplay between the drummers Ronald Bruner, Jr. and Tony Austin who produced Mosley’s Uprising and served as the band’s spokesman at the Drew.  Austin introduced the next tune “Little Boy Blue” from Porter’s new that featured the lovely vocals of Patrice Quinn. The comradery in this band unparalleled and their comfort level with each other leads to a lot of smiling – everyone was really enjoying themselves but nobody more so than keyboardist Brandon Coleman who just could not stop smiling!

The band next turned its attention to bassist Miles Mosley who did a rousing version of his song “Abraham” which featured Mosley’s skill with a bow and a nice little interlude from DJ Battlecat. After Mosley’s dazzling display, the band ended its set with Washington’s “The Rhythm Changes” from The Epic. This beautiful tune was another highlight for vocalist Quinn and the saxophone stylings of Kamasi Washington and his father Ricky who plays soprano saxophone in the band. And, can I just say how cool is that to play in the same band with your Dad? 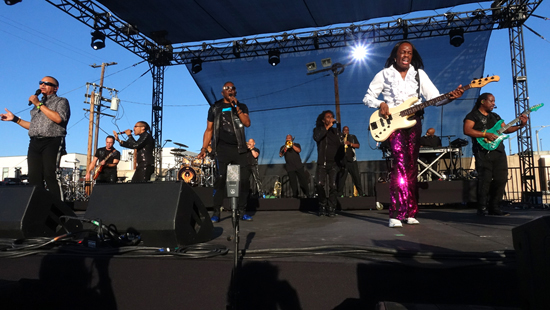 As the temperature cooled and the sun went down, it was time for the event’s headliners, the legendary Grammy-winning group, Earth, Wind & Fire to grace the stage. The band is helmed by founding members Ralph Johnson, Philip Bailey, and Verdine White and they are joined on stage by Bailey’s son Philip Jr. and a gifted collection of percussion, singers and horn players. The entire crowd was familiar with all of the songs and everyone sang and danced along to the group’s hour set of non-stop hits: “Sing a Song,” “Reasons,” “September” and the band’s national anthem “That’s the Way of the World.” One of my favorite sights from the show was watching the enthusiastic kids from the Fernando Pullum Community Arts Center Jazz Band singing and dancing while watching the band from the front of the stage. EW&F still have their mojo with a stage show that features highly choreographed moves, accentuated horn arrangements and great harmonies. Also, Philip Bailey can still hit those high notes on “Reasons”.

After the headliner’s set, there was a rather long break and I expected a lot of folks to head home satisfied with a great day of music. But, evidently, the crowd knew that Shelia E. was worth waiting for. Shelia E. and her band took the stage at 7PM and opened up with very funky version of the national anthem followed by “America” that set the stage for her politically charged set which was focused on her new album Iconic. The album was a result of the musician aborting her dance record and opting for a timely project that calls back to her Oakland roots, where she listened to the likes of Curtis Mayfield and Marvin Gaye, as the Black Panther Party movement gained momentum.  The album was her reaction to the current political climate and the fact that the songs still resonate cozies up to her longtime sax player Eddie M. (photo credit – Richard Bilow)

Shelia E. displayed her talents on percussion, vocals and guitar as the band attacked the familiar 60’s and 70’s tracks from the new album: Parliament-Funkadelic’s “One Nation Under A Groove / Mothership Connection”, Sly and the Family Stone’s “Everyday People”, Marvin Gay’s “Inner City Blues / Trouble Man”, will.i.am’s “Yes We Can” and a medley of James Brown tunes. Between songs she mentioned how much these songs mean to her and that we need to remember that love unites and hate divides us. The crowd loved every minute of it – especially, when she walked through the crowd and then invited them to dance on stage with her. Shelia E. brought the crowd together and made everyone feel loved. Near the end of the show, she asked everyone to look around to a stranger next to them and look them in the eye and say you love them. I did it and the person was so touched, I was soon hugging their entire family – it was very emotional and it brought enormous smiles to our faces.

Shelia E.’s uplifting set and her way with a crowd, brought us together and made us think that maybe we can just get along – an ideal ending to a show with a local focus and an international appeal. I can’t wait for next year’s event and I hope to see you there!