The Hollywood Bowl’s Jazz at the Bowl series this week featured a show entitled Herbie Hancock: Next Generation. It was both a highlight reel of Hancock’s amazing career and a showcase for the next generation of artists guided by one of jazz’s key creators.

R+R=NOW opened the show. Keyboardist Robert Glasper came up with the concept for the jazz supergroup R+R=Now (which means reflect and respond now), while producing Nina Revisited, a companion album to the 2015 Nina Simone documentary What Happened, Miss Simone? In the film, Simone says “I choose to reflect the times and the situations in which I find myself,” “How can you be an artist and not reflect the times?”R+R=Now is Glasper’s response to Simone’s call to action. The band features Terrace Martin on synths and vocoder (he also did double duty as part of the Hancock band), Christian Scott aTunde Adjuah on trumpet, Derrick Hodge on bass, Taylor McFerrin on synth and beatbox and Justin Tyson on drums. 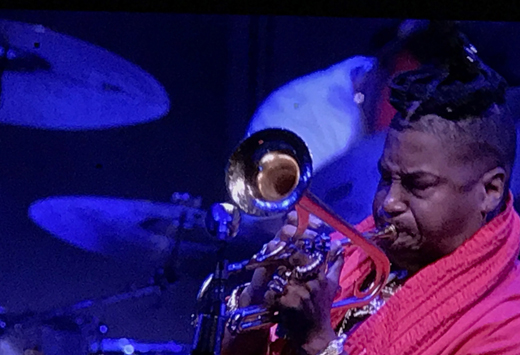 The band played an impressive 90-minute set that included music from their debut album Collagically Speaking as well as tunes from their individual catalogs. As master of ceremonies wearing a Houston Rockets jersey, Glasper set the mood from the start with his humor. However, this was no fun and games, this was serious music as trumpeter Christian Scott aTunde Adjuah reminded us on the second song, “Awake to You.” The musician plays custom made trumpets that have an angled bell so they blend the dynamics of a trumpet, flugelhorn, and cornet. His impressive, expressive solo was a clear highlight.

Other highlights of the set included Taylor McFerrin’s solo when he created a loop, then beatboxed over it. Also, bassist Hodges solo which included an interesting take on the Beatles “Something.” The band was really impressive and even headliner Hancock couldn’t sit by and just watch as he joined the band for a jam near the end of their set. It was an example of Hancock’s sincere interest in mentoring and jamming with young trailblazers. The set ended with Glasper saying, “Coming up next is a piano player that you may know. Give him a chance; be nice and give him some love.” 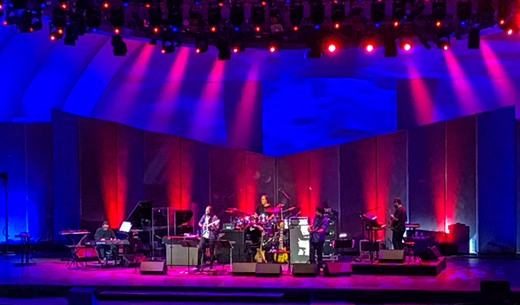 Herbie surrounded by his incredible band; photo by Alex Apple

After a brief intermission, Hancock walked onstage with his band to a roar of applause. In a reference to the 50th anniversary of the moon landing, Hancock told the audience, “Get ready to put your astronaut caps on. Let’s go beyond that, OK?” At which point, Hancock and his talented band launched into an ethereal, soaring track that Hancock called the “Overture.”

After the auspicious beginning, the group broke into “Actual Proof,” from Hancock’s 1973 classic Head Hunters. Then, Hancock introduced the first of several guest stars – flutist-vocalist Elena Pinderhughes. Her impressive vocals and flute playing were featured on the song “R.I.P.” Like Miles Davis, Hancock has a knack for recognizing young talent and giving them an opportunity. After the Pinderhughes showcase, bassist extraordinaire Thundercat joined the band for an energetic version of his “Them Changes” from his Drunk album.

Singer-rapper-multi-instrumentalist Phoelix joined the band for a tune and then saxophonist Kamasi Washington. It was delightful to see the smiles of all the musicians on stage – clearly, they were having a blast. Throughout the night, the incredible band played as a stunningly cohesive unit, producing a lush array of sounds virtually untraceable to any single instrumentalist. Loueke used his voice as an extra instrument, adding exotic, percussive texture while Terrace Martin shined throughout the night as he moved between sax, keys and vocoder. And of course, at 79 years young, Herbie’s keyboard mastery is still astonishing. 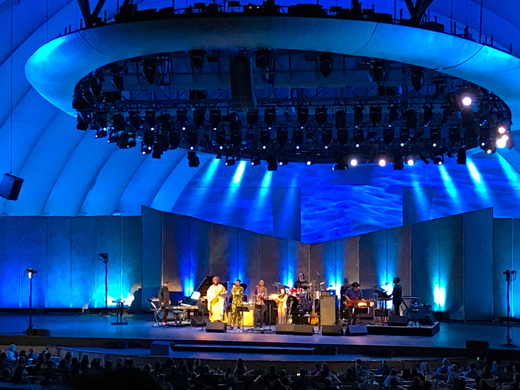 Robert Glasper joined the band for Hancock’s timeless “Cantaloupe Island” and then Hancock looked at his watch to see how much time he had before inviting out everyone for an all-star jam session on his classic “Chameleon.” It was an incredible night under the stars at the Hollywood Bowl all thanks to the openness, humility and the natural cool charisma of Herbie Hancock. See the Hollywood Bowl website for upcoming performances – https://www.hollywoodbowl.com