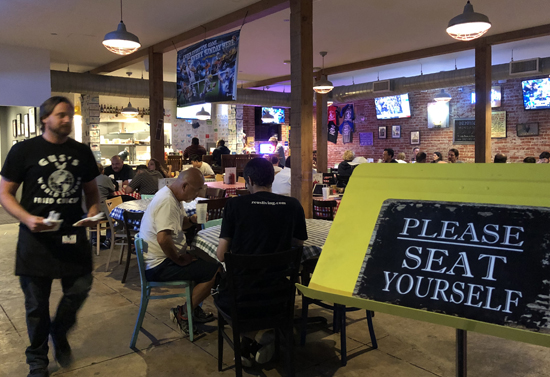 All photos by Richard Bilow, courtesy of LAArtParty.com

The first thing I noticed as I walked through the door at Gus’s World Famous Hot and Spicy Fried Chicken on Crenshaw Boulevard was a sign stating, “Please Seat Yourself.” And I did. It set the tone…the bustling dining room was charming with a relaxed vibe. I had heard a lot about this Memphis style fried chicken and wanted to see what all the hoopla was about. The blue checkered table cloths brought back memories of my own childhood. Whimsical chicken art and vintage blues posters were scattered across the exposed brick wall, along with old photos featuring its legendary owners. 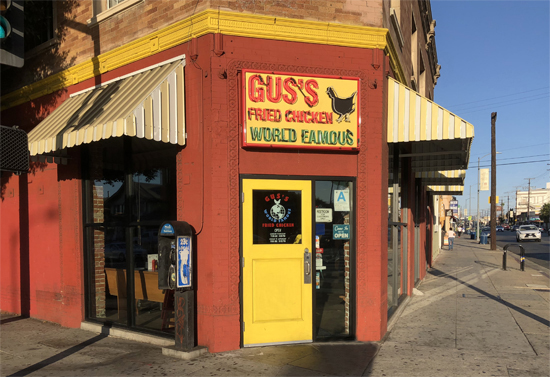 As the story goes…in 1953, Napoleon “Na” Vanderbilt and his wife Ms. Maggie started selling fried chicken sandwiches on white bread out of the back of a tavern in Mason, Tennessee. The response from the local community was so overwhelming that they all chipped in (this was before kick-starter websites) and helped them build the restaurant called Maggie’s Short Orders. After their passing in 1982/1983, Na’s only son, Vernon “Gus” Bonner, inherited the mystery recipe. Gus and his wife Gertrude would reopen the family business with the name “Gus’s World Famous Hot and Spicy Fried Chicken” in 1984. What I love most about this story is that to this day, they still serve the chicken on a single piece of white bread as an homage to Ms. Maggie and Na. The restaurant has received much national coverage throughout the years and now has locations in many parts of the U.S.

I usually try to stay away from fried food, but all bets were off tonight – my photographer and I decided to try it all. Staying within the Southern theme, I chose an IBC root beer and ordered not only the fried pickles, but also the fried okra. Now you are either an okra person, or you are not. I absolutely loved the crisp crunch with the tender okra center – it had a great flavor. The fried pickles offered a contrast of texture, temperature, and flavor. The tang of the pickle was surprisingly refreshing. 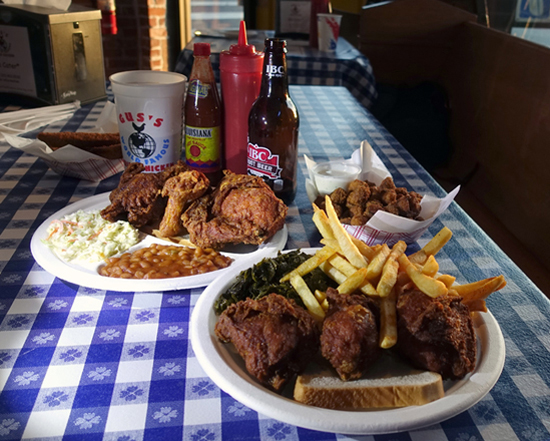 We ordered two three-piece plates of both dark and white meat. One was accompanied with the standard coleslaw and beans, and we selected collard greens and seasoned fries to accompany the second one. I have never tasted such moist white meat. I usually opt for dark, since I have found a breast to be considerably dryer…not the case here. I’d read that Gus’s only used natural, hormone-free chicken…and it was pretty obvious. Both were fantastic – so tender and with a brilliant outer crunch. Now I know why they call it “Gus’s World Famous Hot and Spicy Fried Chicken.” The spicy seasoning catches you off guard. It provides a subtle kick which slowly builds to the perfect level of spice. For those who like a noticeable zing but don’t want to break a sweat, this is made just for you (and me). The sides were excellent as well. The beans had a luscious sweetness, while the coleslaw kept its crunch with a tasty mayonnaise, and the collard greens were so flavorful. Even the French fries were better than most, due to the seasoning. I was utterly impressed. 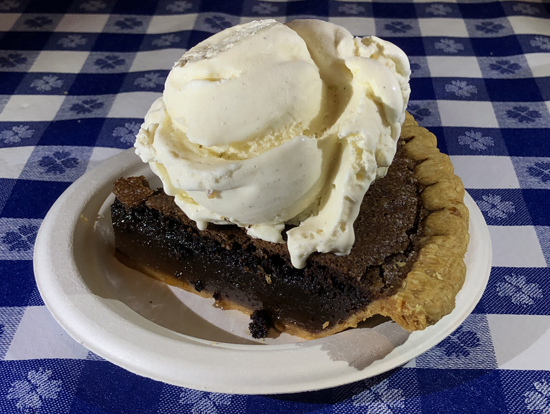 Having said that, dessert just about blew my mind. Too stuffed to order one each, my dining companion and I decided to share just one – the Chocolate Chess Pie – thinking we probably would leave something on the plate. After all, it is my job to try it, I reasoned in my head. Soon, we found ourselves fighting over the last bite. The pie was browned on top – crusty, almost like a crème brûlée. Inside, it featured a rich chocolate custard. It appeared at our table with a huge scoop of vanilla ice cream on top. The warm piece was deliciously offset by the cold creamy ice cream. Sweet!!!

Now I realized what all the hype was about. Throughout the night locals continued to come in to order straight from the counter and headed back home. These residents knew what they had right in their backyard. If you like fried chicken, be sure to venture out and head to Gus’s World Famous Hot and Spicy Fried Chicken (1262 Crenshaw Boulevard, Los Angeles, CA, 90019). There are other LA locations in Burbank and Long Beach – check the website for more info. http://gusfriedchicken.com