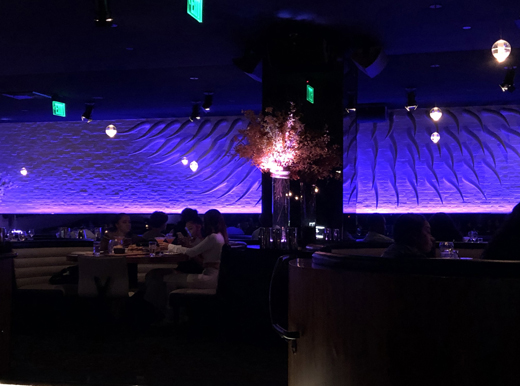 One of the things I love about living in LA is that on any given day, you can decide to enjoy a night out on the town. STK Los Angeles is the perfect place to let go of the day’s worries and reconnect with a loved one, or a group of friends. Located in the W Hotel in Westwood, the restaurant offers an elegant yet trendy ambiance, with a night club vibe — perfect for a romantic dinner. The voluminous booths are also conducive to accommodating large groups. When we arrived, DJ Ivy was on the scene, keeping a constant groove with both memorable and new tunes on her playlist.

Executive Chef Robert Liberato has created an eclectic menu featuring a modern twist on classic dishes. Our server recommended two of the most popular cocktails to start off the night with. The Cucumber stiletto (citron vodka, St Germaine — an elderflower Liquor, lime muddled cucumber and mint) was crisp and sweet with a subtle taste of fresh cucumber and mint. Served in a martini glass, it was quite refreshing. The Secret Affair (Don Julio Blanco tequila, lime juice, muddled watermelon, jalapeños, freshly sliced and muddled, served on the rocks with a tajin rim) was fruity with a spicy kick. 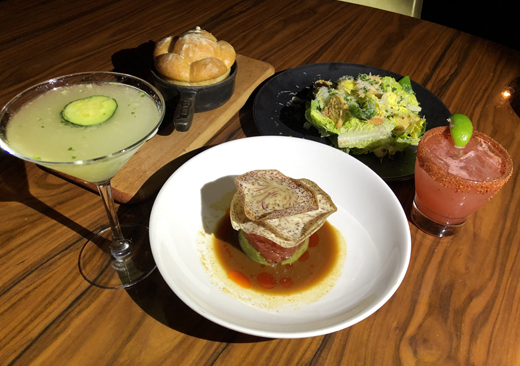 Fresh baked sour dough bread in its own cast iron mini pan arrived at the table. The warm bread was topped with a glaze of blue cheese and came with a side chive oil. Delish. For appetizers, we enjoyed a Baby Gem Lettuce Caesar, and Tuna Tartare. Beautifully plated, the tuna (which melted in my mouth) was assembled atop a mound of avocado sitting in a savory sea of flavor. The menu stated it was a soy honey emulsion, but it was so much more…it had a sweet yet tangy flavor that mingled perfectly with the ripe avocado. The creaminess of the avocado, which was at the base of the Tuna tower was slowly being absorbed into this sauce which was continuously evolving. I found out later from on staff Chef Dennis Cruz (who was quite open and forthcoming about many of the recipes) that there was lemon in it, which accounted for the tang that I tasted. It pulled the whole dish together, along with the oversized taro chips provided to scoop up the delicate tuna. 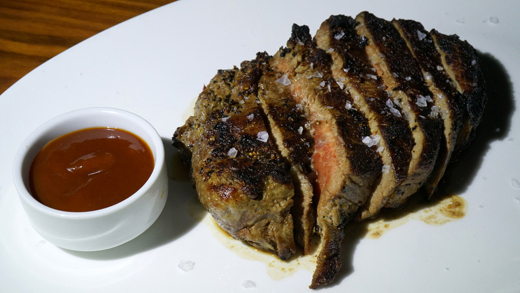 The entrees took the meal to an entirely different level. The NY Strip Steak (14 oz) was cooked to a medium rare (as ordered), and came with a delicious house-made STK sauce. It was a perfect pairing with my Elouan Pinot Noir from Willamette Oregon.

The Ora King Salmon was divine. On arrival, I had to take a moment to enjoy the beauty of this creation. The colors of the salmon and these perfectly cooked vibrant vegetables made the dish pop. The salmon was perfectly cooked with a beautiful sear on top. It sat upon a throne of vegetables which were bathed in a light ginger consommé. The broth was a perfect companion for the fresh delicious sweet peas, baby carrots, snow peas, and sprouts. 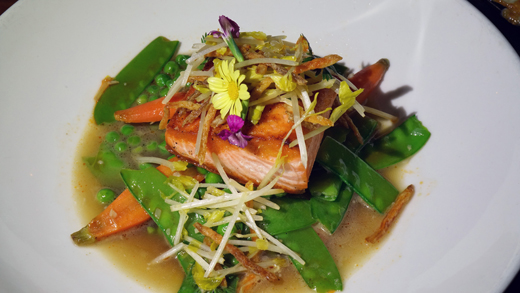 For sides, we enjoyed the broccolini, which had a lively bite (chili oil), and to-die-for Mac & Cheese. Chef Cruz told us the secret…why use one cheese, when you can use three? Cheddar, Asiago, Parmesan cheese in the Mac, along with mornay sauce made this dish magnificent.

Even though our tummies said “no more,” our eyes widened as two desserts appeared. The Warm Chocolate Chip Cookie was presented in a cast iron square pan (caramel sauce, and hot fudge) and a large scoop of vanilla ice cream…yum! 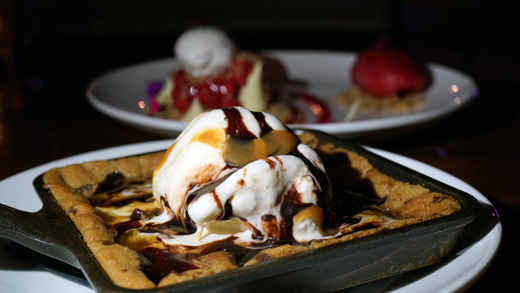 The Strawberries and Cream dessert reminded me of a Mike Kelley installation that I had seen last year at Hauser and Wirth Los Angeles. No kidding…this dessert was a work of art. It was a beautiful display that looked like a futuristic city. The gorgeous bright red strawberry sorbet that engulfed a pile of graham cracker crumble resembled a retro building that faced a brilliant white and red tower of sweet delicacies on the other side of the plate. The whipped cream top appeared to be a firm roof (but it was soft to touch and sublime). Once again, looks can be deceiving…underneath the white sweet sugary roof, what appeared to be a mound of nuts that was drenched in strawberry sauce, actually was a large dollop of tiny slices of strawberries. This was so delicious and sweet sitting above a thicker smooth creamed custard atop a sugar cookie. 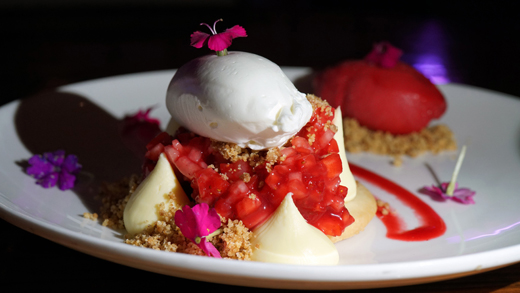 This architectural inspired cluster featured perfectly designed elements that bordered the structure and resembled white chocolate kisses in shape (think Taj Mahal). But instead of the expected crunch of a meringue, they were soft creamy white chocolate surprises. The dish also offered little lakes of strawberry sauce…streams that connected the three dimensional city unto itself. Needless to say, the city was soon demolished despite its beauty…which was matched by its superb taste.

As we waddled toward the door, we noticed a flaming dessert (#the cloud) being served. We both agreed we would return to STK Los Angeles — the meal was more than dinner…it was a gourmet experience. STK House is located at 930 Hilgard Avenue, LA 90024; 310 659–3535; https://stksteakhouse.com/

Originally published at eattravelgo.com on April 2, 2019.