When mounting an iconic play such as “Who’s afraid of Virginia Woolf,” by the acclaimed writer Edward Albee, both a fresh perspective or classic approach to the play can make or break it. Any theatre lover will know the plot, how it ends, along with who has previously played these roles. Everyone involved will get compared. 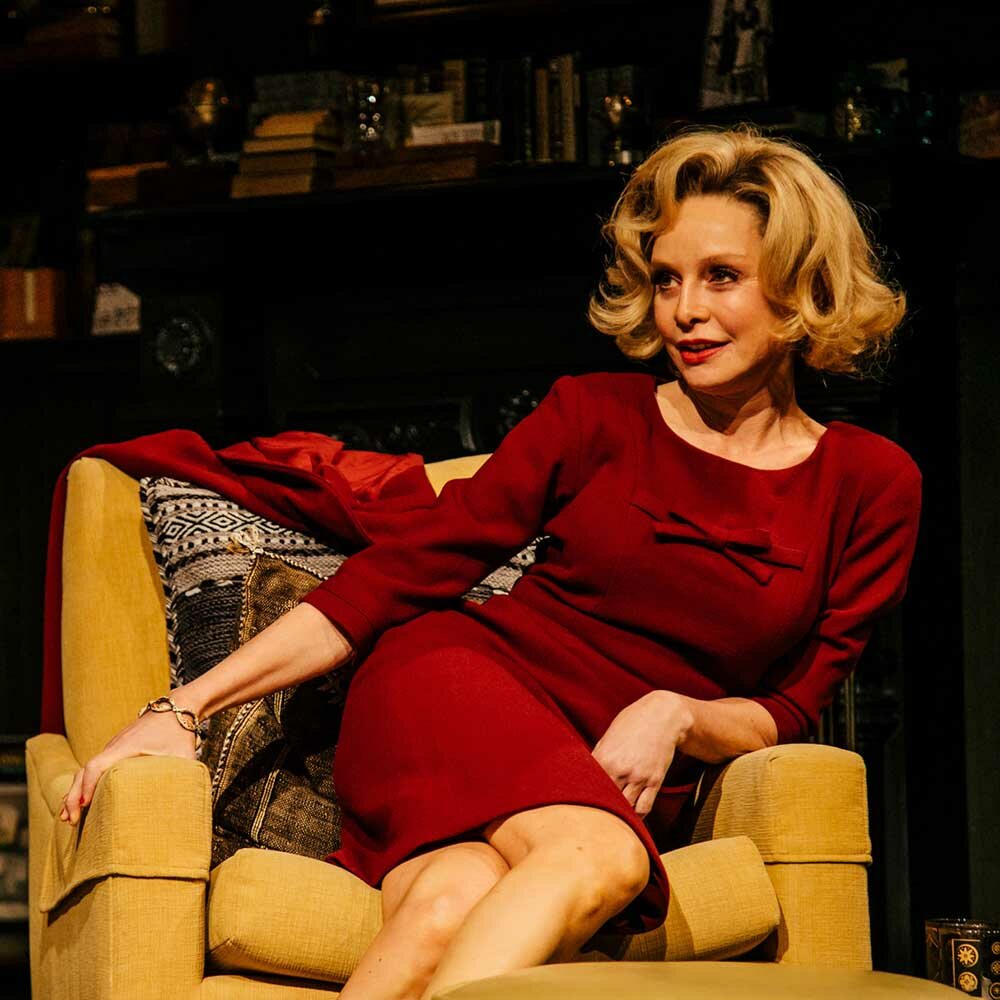 Calista Flockhart as Martha in “Who’s Afraid of Virginia Woolf”; photo courtesy of the Geffen Playhouse

Legendary actresses such as Uta Hagen, Kathleen Turner, Amy Morton, Elizabeth Taylor (the film version directed by Mike Nichols), and more have portrayed the gritty role of Martha in “Who’s afraid of Virginia Woolf.” Taking on this role is an act of courage and confidence.

Director Gordon Greenberg has challenged the traditional casting of this masterpiece, creating an exceptionally unique outcome.

Calista Flockhart (best known for her quirky leading role in Ally McBeal) is an unusual choice for Martha, as is the casting of Zachary Quinto (Spock, in J.J. Abrams’ Star Trek) as George. By pairing them with Graham Phillips (Riverdale) and Aimee Carrero (Off-Broadway -The Portuguese Kid), Greenberg achieved a sizzling onstage chemistry, giving this rendition of the play a flavor all its own.

Flockhart, as Martha, commanded both the stage and George. She was biting and vengeful, yet vulnerable. She harnessed her character’s sexuality to manipulate her husband, and everyone else. She was downright sadistic to George playing on his insecurities, then in a matter of minutes she turned playful laughing at him, and with him.

While the bizarre and incredibly uncomfortable evening progressed, the audience witnessed Quinto’s subtext, as George attempted to reign in his rage just before exploding on more than one occasion. Although the script led his character to live within the flux of giving up completely and fighting back, Quinto artfully portrayed George’s turmoil, provoking both our sympathy and our outrage. 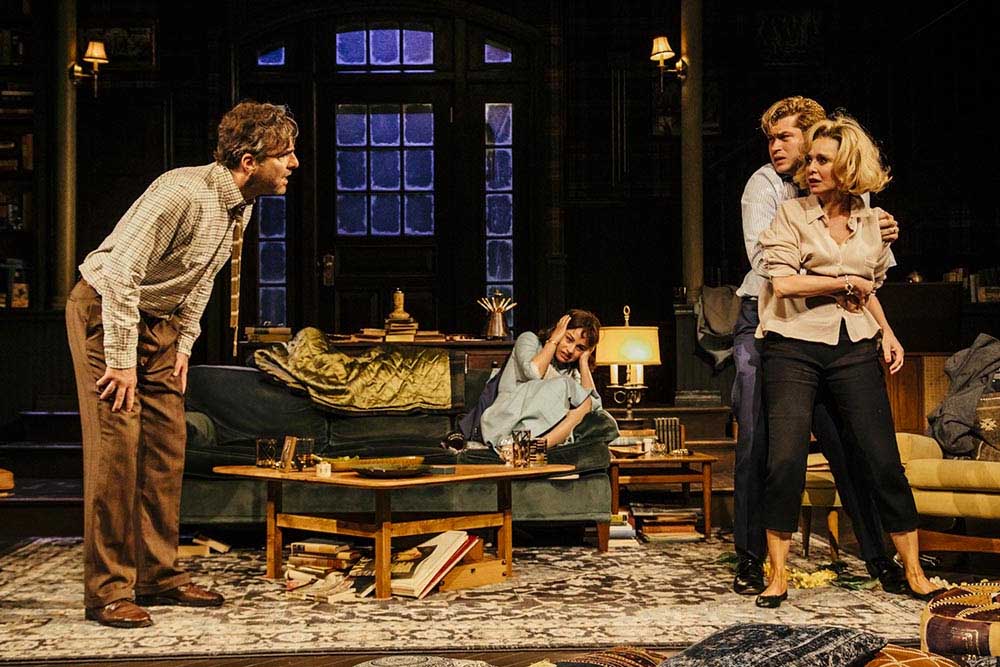 Graham Phillips was charming, yet unassuming as Nick. The actor brought a sense of knowing, yet a denial within the character for what he was actually dealing with. Aimee Carrero was hilarious as Honey…her interpretive dance and drunk one-liners provided the much needed comic relief.

If you don’t know the play, George and Martha are in a longtime tumultuous marriage. The embittered George, who was supposed to take over the college run by Martha’s father, lives under the relentlessly judgmental scrutiny of both his father-in-law and his constantly demeaning and abusive wife. Now that the chance of  his promotion is gone, he is shot down at every endeavor, he has basically given up, and Martha will let nothing go.

They have just returned from a University event, and Martha (without telling George), has invited a new teacher and his wife to join them for games at 2:00am. In walks a young couple (Nick and Honey), and the power struggle begins. Martha never hides her feelings, humiliating George in front of the teacher and his wife repeatedly. George makes snide remarks.

As the evening progresses, the two tried to top one another, attempting to shock the young couple, and drag them down into the mud as well. It is as if they are foreshadowing the life that Nick and Honey were in for.

During the first act Martha is so brutal that we feel sorry for George, but then the tables are turned and George’s rage is unleashed. The young couple is caught in the crossfire. At one point, they resembled children, sitting on the couch, vulnerably watching ‘mom and dad’ hurl insults at each other…their heads bobbing back and forth as if they were watching a tennis match. Of course Honey and Nick are lured into bringing their own storied past to the table…exposing secrets and revealing their own regret. 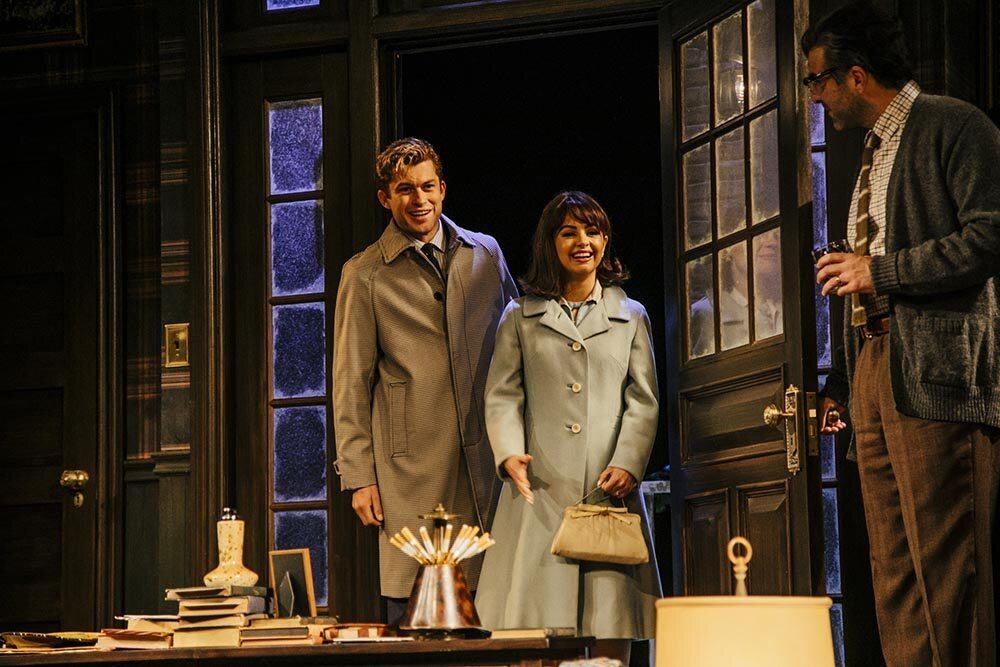 It is not until the third act, that both the audience and the young couple discover George and Martha’s son (whose story has been part of the play since the first act) is an imaginary one. In horror Nick realizes what is going on, Honey soon follows suit. George decides it is time to end the charade forever. As the dialogue unfolds, we discover that George and Martha could not have children, so they created an imaginary boy.

This game was solely for George and Martha, but Martha broke the rules and told Honey about their son. George responded by creating a fictional story about their child’s demise. It shattered the delusion the couple had created.

The play is actually quite funny amidst the explosive dialogue and emotional nightmare. The amount of talent on that stage was apparent by the tension and suspense that filled the theatre. Director Gordon Greenberg kept the play moving with an ebb and flow of a rollercoaster. The scenic designer, Wilson Chin created a simple yet cluttered home, which added to the chaos of the evening. Kudos to the lighting designer, Elizabeth Harper, and costume designer Alejo Vietti.