Be prepared to have your head spin as you navigate the shifting waters of playwright Paul Grellong’s “Power of Sail.”

Bryan Cranston leads the cast as Charles Nichols, a flawed ancient mariner of a  Harvard history professor who has invited a white supremacist to speak at his annual symposium. To the uproar protests of the young student body, who he mocks for their need for “safe spaces,” he tries to justify his action by touting the platitude “the answer to hate speech is more speech” and takes the high ground position that he will debate and take down the reprehensible man. 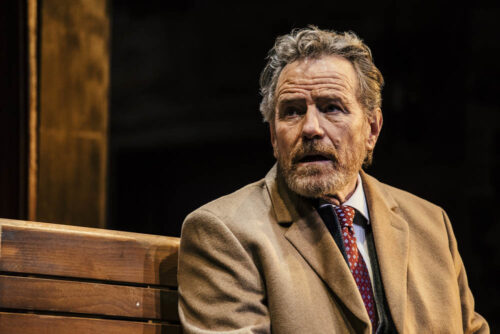 Amy Brennan stoically plays Amy Katz, the college dean who attempts to convince Nichols to rescind the invite. She anchors their conversations with a sense of rationality and integrity in an attempt to correct what is the professor’s own flawed moral compass.

Seth Numrich and Tedra Millan portray the professor’s graduate students who spar with the professor from their own stances. Lucas Poole is portrayed as a self-effacing buffoon whose dissertation is on an obscure historic matter not much relevant to today and Maggi Rosen holds forth standing up for her unwavering sense of social justice in whatever manner she feels necessary.

Brandon Scott is sober and charismatic and exhibits swelling restraint as Baxter Forrest, the professor’s favored post graduate who tries to curtail his mentor and is confronted by the perceptions from others that his academic and professional success is attributed to the affirmative action favoritism that has been afforded him.

The white supremacist does not appear as an actor on stage, rather as a presence that haunts all the characters from the shadows. Hugo Armstrong plays Frank Sullivan, a barkeeper, who offers some levity to the other characters’ interactions. Donna Simone Johnson is Quinn Harris, an FBI agent, who brings the pathos of the story-line to shore as the events take their course. 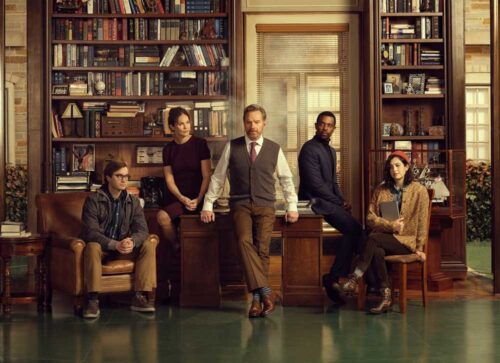 Cranston’s masterful pontifications, and at times what seems as riffing, holds our attention as we piece together the non-linear narrative. The serous dialogue is punctuated throughout the play with off-handed comments and out-right silly jokes that entertain the audience and mask the below the surface more troubling motivations of the characters.

The play’s metaphoric title refers to the maritime law that “a ship under power of motor must give way to a ship under power of sail.” As can only be, there are no clear answers or resolution to the dilemmas presented by the play. We can just, as Grellong says his goal is to, “drive conversation between audience members after the show is over”

“Power of Sail” continues at the Geffen Playhouse in Westwood though March 20, 2022. Visit the website for additional information about the production – geffenplayhouse.org