The latest project of the Rebel Babel Ensemble is a universal tribute to hip hop pioneer DJ Premier. The transcultural international big band, perhaps the world’s largest (currently boasting over 11,000 members from sixteen countries), unleashed “Tribute to DJ Premier,” its herculean video “gift” to Preemo and the world, on the legend’s birthday, March 21, 2020. For this particular orchestration and video project, Rebel Babel and its conductor and co-founder Łukasz “L.U.C.” Rostkowski arranged samples from DJ Premier’s work for a jazz big band collaboration that was recorded in eight European and U.S. cities with just under 100 musicians involved. CLICK HERE to watch “Tribute to DJ Premier.” Find scores to the arrangements published on Rebel Babel’s Compositions page. 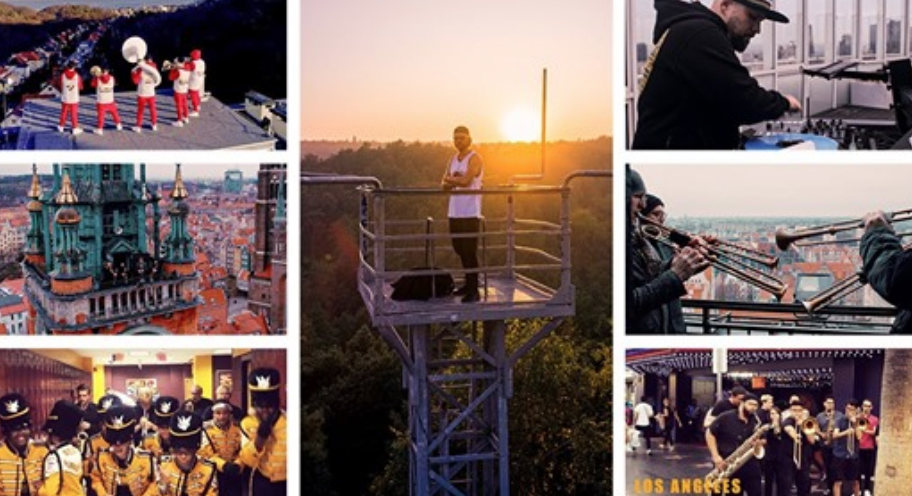 From inception to completion, the project took over a year, and in the end, gathered almost 100 musicians from Europe and the U.S. to participate collectively in the tribute. The bands were recorded in New York and Los Angeles as well as in Austin, New Orleans and in Connecticut’s New Britain, plus the Polish cities of Gdańsk, Warsaw, Sopot and Wrocław. Multi award-winning battle turntablist DJ Eprom (IDA World Champion among other titles and honors) was instrumental in the project.

As a global ambassador, Rebel Babel connects musicians, rappers and composers from different regions of the world combining cultures, languages and stylistic genres. The ensemble travels around the world organizing surreal performances—flash mobs and parades combining live music with the sounds of nature or technology—as well as micro- and macro-concerts. The mission of the project is to build dialogue and understanding through music.

L.U.C., the originator of the tribute, said that one of the factors that inspired him to create this arrangement was due to the generosity of DJ Premier himself. “Our orchestra is trying to make positive surprises. Sometimes it’s a concert with car horns for those drivers who are tired of the morning drive to work, sometimes it’s playing for sick children in a hospice and sometimes almost 500 days of work and a birthday present for a hip-hop icon,” declared L.U.C. “We really appreciate how DJ Premier takes time to remember and honor other artists, and makes sure that their work is not forgotten. This tribute is our expression of gratitude and respect, and a surprise birthday gift!”