Skip to content
Pick of the Week…the Work of Julienne Johnson Featured at LA Artcore Union Center for the Arts, Sunday, September 8th! 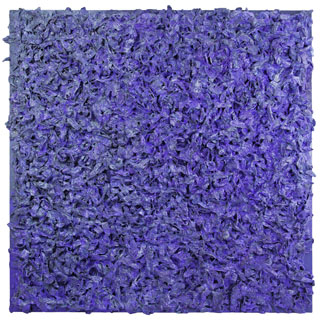 My Pick of the Week takes place this Sunday, September 8th……the work of artist Julienne Johnson will be part of the Franklyn Liegel Memorial Exhibition at LA Artcore (Little Tokyo).

Julienne is an incredible artist and it’s quite amazing to watch her work evolve. This series is a complete departure from her previous show. This is going to be a fantastic show.

Curated by Lydia Takeshita, the exhibition will feature the work of Johnson’s beloved late teacher and mentor Franklyn Liegel along with several of his colleagues.

Johnson will share selections from her latest series entitled, TOUCHED. The name of the series was inspired by Peter Frank,(Art Critic for Huffington Post, and Associate Editor for Fabric Magazine). Johnson explains, “Peter actually named this series of work, which went on to become the title of a book documenting the ten artworks. And that’s appropriate, considering that Peter was the editor for my first book and has a most thorough understanding of what I have a need to express in the work.” 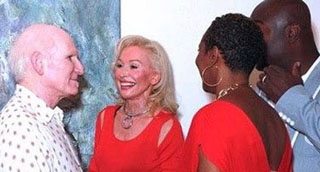 Johnson teamed up with Frank on her first book, Ashes for Beauty, before she began the TOUCHMETOUCHYOU collection of work in January 2012. which was inspired by her trip to Doha, Qatar. She attended the opening where her paintings were included in an exhibition with thirteen other international artists in 2012.

To this day, Johnson’s experience in Doha continues to speak through her work. She explains, “My exhibition at the Anima Gallery in Doha, and the interaction I had with women in full hijab (faces covered) while there, has generated an even broader range of emotional content on the subject of communication and connection….propelling me toward speaking louder and more clearly in the work. 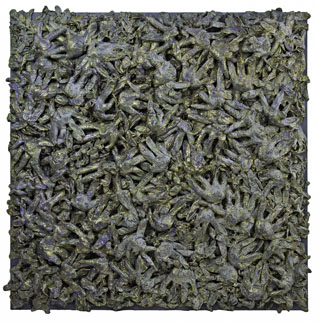 nson’s new series is made entirely of surgeon gloves. A prolific artist who paints with her hands, Johnson goes through four to five pairs of surgeons gloves a day. She has recycled them into her mixed media pieces. “The whole series was emotionally complex in it’s development,” says Julienne…”still there’s a kind of climatic relief when you know you have expressed through an artwork as much as you have to say, for the moment. Last January, when the collection began I was speaking softly.  Months later the volume was turned up and the static was clearing.  Now – I’m shouting, perhaps screaming.” Her big breakthrough came, while she was working on one painting, TOUCHED # 10. Finally she adds, “TOUCHED took me down a path that I’d rather not travel, yet there is good in knowing that I did.”

Her new book, TOUCHED, foreword by Peter Frank, Art Critic, Huffington Post, Associate Editor Fabrik Magazine will be on sale at the exhibition. 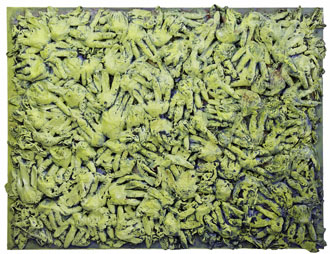 Soft covers will be available for $15. Hard covers can be special ordered for $60. Johnson is donating all proceeds to the Franklyn Liegel Legacy Foundation and LA Artcore Gallery, a not for profit gallery which is committed to art that captures the culturally diverse spirit of the city.

Both books will also be available on AMAZON. The opening reception will take place this Sunday, September 8, 3:00 to 5:00 pm, with an Art Talk at 4pm.  Exhibiting artists, along with the Johnson and the late Franklyn Liegel include:  Joseph Piasentin, Hei Myung Hyun, Kaoru Mansour, Robert Walker, Ramone Muñoz, Rheuban.

2013-08-31T01:33:34+00:00By Kathy Leonardo|Past Events|Comments Off on Pick of the Week…the Work of Julienne Johnson Featured at LA Artcore Union Center for the Arts, Sunday, September 8th!