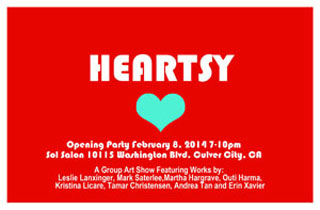 ick of the Week is a fun artist produced event (which I love) at Sol Salon in Culver City.

“Heartsy” is a group show featuring a different type of media and style. Each artist works with he various styles in the show includes the photographic storytelling of Erin Xavier and Tamar Christiansen, colorful figurative collage work by Kristina Licare, Mark Saterlee, Andrea Tan, and Outi Harma, drawings by Leslie Lanxinger and abstracts by Martha Hargrave

Heartsy explores various thematic elements of the heart and art in non-traditional gallery space. A common ground within all the artists is their love for creating art and sharing it.

The opening night of Heartsy will also be the first showing of an interactive art piece called “Love Swap” by Andrea Tan. “Love Swap” is an installation where the lookers are invited to participate in a love conversation via materials provided on site. Participants may take a piece of art from the installation as long as they leave something behind preferably an art piece they made on site. 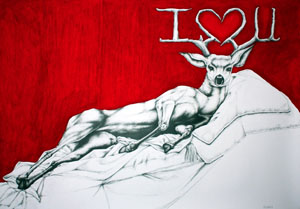 Leslie Lanxinger   http://lolaramona.org/home.html
Leslie’s art fuse mythology, religious iconography, fairy tales, and pop culture into exquisite composites. Her artist statement, “I filter the world around me through stories and metaphors in order to create an emotional taxidermy”. My interpretation of Emotional Taxidermy is when she mixes simple details and light subjects with something filled with tension or even considered heavy therefore invoking a myriad of reactions from the looker.

Andrea Tan
Andrea Tan was a government bee worker turned artist by all the torturous hours of politics and bullshit she had to put up with. Now she is a maker of anything she conceives in her head from art, to furniture or clothing, cupcakes and jewelry. She works as a freelance event producer and designer as well as a stylist. Her style is unpredictable and changes constantly according to her moods or if its paid work what the client wants. She loves the challenges of creating organically using found objects and having design aesthetics dictated by her materials.

Outi Harma http://www.facebook.com/outiart
Outi Harma is originally from Lapland, Finland. About twenty years ago her move to the warm, multicultural city of Los Angeles was the catalyst that catapulted her creative expression. 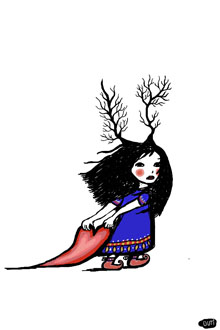 age: by Outi Harma, “Leaving with a heavy heart”

Harma’s images create exciting worlds that merge the visible and invisible. Her years of exploration in movement, dance and performance art, brings a wide variety of characters, fluidity and emotion to her paintings

Tamar Christensen
Tamar is gal with a camera and a motley disposition. Listening to her great-grandmother tell colorful stories about living in Death Valley at the turn of the 20th century coupled with her own varied and contradictory life experiences has inspired her to find the story in others. Tamar is a storyteller herself as her captured images demonstrate both the complexities and simplicities of the lives she encounters.

Martha Hargrave
Martha is an avid painter that mostly draws inspiration from her surroundings. She mostly paints abstractions of her and her husband’s favorite scenery and travel spots. 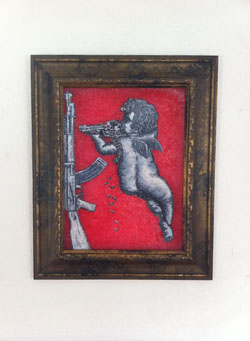 See image: by Mark Saterlee. Its done in fiberglass and has a stained glass effect.