Our Pick of the Week takes place at KM Fine Arts in West Hollywood this Saturday, January 24…Bernie Taupin (yes co-writer to Sir Elton John) is also a wonderful artist. BE AWARE YOU MUST RSVP – see below for details!!

Here is some info from the gallery…. 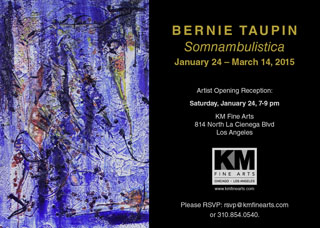 An opening reception will be held on Saturday, January 24, from 7-9pm with the artist in attendance.

“Somnambulistica” highlights Taupin’s ability to manipulate a wide range of media into lyrically abstract works that only hint at narrative but are loaded with dynamism. While creating this new body of work virtually any material was subject to serve in his creative arsenal. Among the use of more traditional media such as acrylic and oil paints, wax, cheesecloth, bubble wrap, glass, metal and shredded paper can also be found within this body of work. Each painting acts as a visual ensemble of color, texture and movement.

Bernie Taupin, a British-born American artist, whose early childhood appreciation of the arts was introduced by his Bohemian mother and maternal grandfather. While in New York during the winter of 1970 and 1971 Taupin found himself seeking solace in the myriad museums in the city. It was during these visits that he began honing his visual sensibility.

In 1990, armed with an acute painterly awareness and an appreciation of modernist painters of the 1960s and 1970s, Taupin began a serious career as a visual artist. The aesthetics of Anselm Kiefer, Barnett Newman, and Mark Rothko live keenly within his work and figuration is of little interest to him. By restricting himself to the vocabulary of abstraction he remains open to explore the more visceral relationships between color and texture. Zips, splashes, blocks, dabs, and drips of color coalesce to form symphonic paintings that appear to hint at a message, but intentionally fall just short of doing so.

Bernie Taupin may be best known for his legendary songwriting career, yet very little tangible overlap exists between his work as a wordsmith and his approach to painting. As critic Doug McClemont writes in “Earthy Delights: Bernie Taupin’s Alchemical Abstraction,” published in the accompanying exhibition catalog, “Taupin’s vigorous abstractions are extensions of his id.” He continues, “Abstraction, like Jazz music or a Shakespearian monologue, is felt more than cognized. If, like a younger Taupin visiting museum after museum, we succumb to its challenges and charms and allow color and form to wash over us, the rewards are plentiful.”