have a new contest going on until Thursday night, April 19th….Find the code Phrase on LA ART Party to win two free tickets to the VIP Preview of the the Los Angeles Art Association’s annual GEM Show which takes place on Saturday April 21st.

The VIP preview gives you special access from 6 to 7pm and the cost is normally $120 per ticket at the door. Includes hors d’oeuvres, desserts, champagne and hosted bars. Email us the code phrase, @ laartparty.com and you will be entered into the raffle to win. See the Upcoming Page for more info.

It will be an incredible event and fabulous Art Party….so get in on the action! Find the key phrase…Good luck! 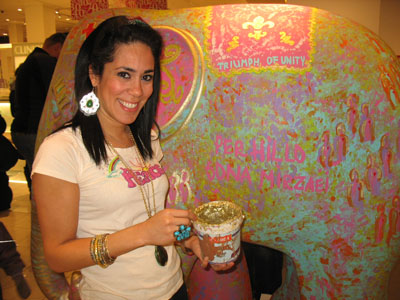 Some fun openings coming up this week….See today’s Santa Monica Mirror for my article about the Pick of the Week…Sona Mirazei showing at the Jeanie Madsen celebration and opening.

Yes, Saturday, the Jeanie Madsen Gallery celebrates its three year anniversary with the opening of Mixed Media Conversations II and it’s gonna be a great party….so come on out. The event will feature a DJ, refreshments, a wine bar and appetizers!

Contemporary artist Sona Mirzaei will be a featured artist in this group exhibition at this special anniversary celebration and exhibition on Saturday April 14th.

Artist and gallery owner, Jeanie Madsen is also a designer of one of a kind fashions. In 2009, Jeanie Madsen decided to branch out from the fashion world to open her gallery. Though she still designs and sells her work at the gallery, these past three years, Jeanie has featured many wonderful artists throughout her exhibitions. eing the only American artist chosen to be a part of the Elephant Parade, Sona was thrilled to be a part of this great cause due to her love of wildlife and her passion for the arts. Working all day on her elephant, she would then forge ahead inspired by the day’s activities and paint all evening on her Copenhagen series during her time in Scandinavia.

an imagine the range of emotions that Sona must have experienced while creating this selection of paintings during her adventure abroad. Tales of Copenhagen demonstrates the whimsy and vitality of her work by capturing a lighthearted and colorful representation of that enchanting part of the world.

When asked about the subject matter of her Copenhagen series, Sona says “The paintings” tell the story of my experiences in Denmark while I was working on my elephant Triumph of Unity for the Elephant Parade. The colors are representations of the various moods I experienced while creating work in a place that was entirely new to me. I’ve done a lot of traveling but I’m also a California girl at heart who is addicted to sunshine, and suddenly I found myself in a position where I was working on the other side of the world in the dead of winter, so I definitely think there are elements in the paintings where I was trying to bring a bit of that fun-loving warmth into the work because it reminded me of home.” is the first time Sona has exhibited her work at the Jeanie Madsen Gallery and both parties are excited to join forces. Sona explains, “I am super excited to play a role in such a great marking of success for Jeanie’s gallery! It truly is a great opportunity for any artist to showcase their work during a gallery’s anniversary since, naturally, it gives extra hype to the exhibition and that in turn gives a boost to the artists who are showing their work. I think it will be a fantastic exhibition and I really look forward to the opening!”

The Jeanie Madsen Gallery features fashions and wearable art accessories at the gallery as well as tonight’s special fashion installment. When Jeanie is asked what plans she has for the future, she smiles and says “I’d like to open a second location in New York City.” 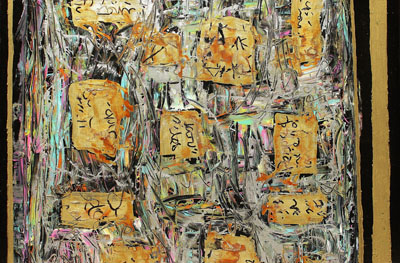