LA Art Party attended the opening gala of photo la on Thursday, Januray 15. There were galleries, dealers, museums, and nonprofit organizations from the US and the international community. In addition to showcasing 19th century works to contemporary photographic art, photo la’s acclaimed programming included lectures, roundtable discussions, special installations, and docent tours with distinguished members of the photographic/arts community. 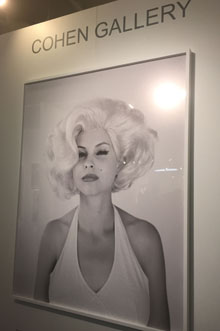 Stephen Cohen of the Stephen Cohen Gallery started photo la twenty four years ago when he needed to find more clients in LA. His work on the fair allowed him to open a small gallery.

Documentary photographer Catherine Opie was honored this year at photo la’s exclusive VIP opening gala and celebrated her lifelong contributions to the arts. Additionally, all proceeds from the opening gala will go towards photo la 2015 beneficiaries The United Way of Greater Los Angeles and The Painted Brain.

Some of the highlights I enjoyed were Helen Garber:

See image: Helen Garber, Venice: Yesterday/Today or still crazy after all these years

“I am thrilled to have been given the honor of a solo exhibit at this prestigious international art show. We used the opportunity to present my latest project, my first folio of the series: Venice: Yesterday/Today or still crazy after all these years.

The 16 image, 16 x 20″ folio in custom box is in an edition of 15 with two artists proofs. Garber said she was interested in finding collectors to purchase and donate one to LACMA and one to the LA Public Library Photo Collection. Helen K Garber Studio is located at 801 Ocean Front Walk, St 9 in Venice Beach. www.helenkgarber.com 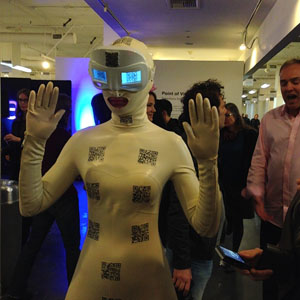 At the gala, we enjoyed tacos from Escuela Taqueria (with locations in both Beverly Hills and Pasadena) as well as Vodka from Tito’s Vodka, beer from Angel City Brewery and others.

There was a woman wearing a costume that was covered in QR codes who interacted with the crowd – a kind of fashion meets performance art – very ambitious. Unfortunately my iPhone did not read the QR codes so I wasn’t able to link to her website.

To find out more about photo la, visit the website http://www.photola.com