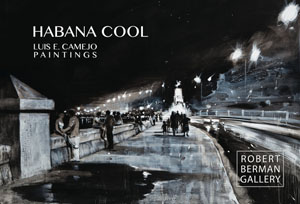 See my article featuirng the event from my column “Art Hopping with Kathy Leonardo” in this week’s Westside Today! Westside Today comes out every other week and is included in the SM Mirror, Brentwood News, Century City News, etc.

Depicted in vast dimension, Camejo captures the sultry and nocturnal cosmopolitan life of Havana. In Camejo’s eye, the city is dripping, moving and resonating the heat of Cuban life. Pre-revolutionary cars scream through puddles, the skies, the horizon, the cement pavement merge into one, and the pedestrians blur into the urban landscape.

Curated by LA art impresario Adolfo V Nodal, this exhibition brings the latest paintings by the artist to Santa Monica. Some of his new themes depict the ever changing city and new images that are the result of an expanded crop of visitors from the US and elsewhere.

“…Luis Camejo has consistently captured city life in Havana in all its gritty, humid and bright splendor. Havana has often been compared to Paris and for good reason. The city has its own breathtaking vistas and bohemian culture. Camejo sees the city exactly how you see it and shows you what it looks like in your dreams…” said Adolfo V. Nodal. 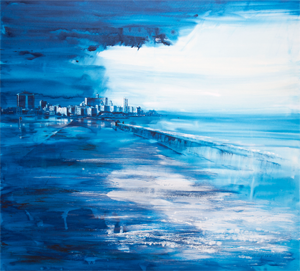 Habana Cool brings Havana movement to the Santa Monica summer. The artist will be present at the exhibition’s opening night July 25th.