Skip to content
On View at Skirball Cultural Center, “a smile, they said”

Stop by Skirball Cultural Center through September 1, 2013. Currently on view now, “a smile, they said” is a new, site-specific mural painted by Berlin-based artists Antje Schiffers and Thomas Sprenger. Admission is free.

e mural is part of a greater project, “Let Me Show You Around,” which embodies a process of collaborative art that perfectly captures the welcoming spirit of the Skirball, an institution inspired by diversity and plural expression. For the project, Schiffers and Sprenger were in residence at the Skirball for two weeks. During their stay, they interviewed members of the Skirball community about ideas of welcome. As a result of these interactions, the artists created “a smile, they said,” a large-scale mural covering the walls of the Ruby Gallery, one of the Skirball’s most communal spaces.

In their interviews with the artists, the staff at the Skirball shared a diverse array of images ranging from waterfalls, unicorns, and penguins to patio chairs, fountains, micrography, and matzoh ball soup. Some participants spoke of paradisiacal landscapes, while others referred to American customs as well as rituals rooted in Jewish tradition. The artists then took these plural expressions and incorporated them into “a smile, they said,” a blend of wall art, paintings on wood, and text. The result is a fascinating composite of more than eighty distinct voices unified into one.

“We see the mural as a sort of ‘stage’ for welcoming,” say Schiffers and Sprenger, “so it’s appropriate that it is set in the Ruby Gallery, which is an area for welcoming people to the Skirball. The greatest challenge was how to encompass all of the contributions, but also maintain enough distance that the final product would not be fragmented, but a comprehensive, inclusive whole.”

To mark the opening of “a smile, they said,” the Skirball will host a conversation with the artists following a screening of “Pantry” on Thursday, April 4, at 8:00 p.m. The film documents another collaborative project in which Antje Schiffers and Thomas Sprenger participated, together with the artist initiative myvillages.org. For the “Pantry” project, locavore-minded organizations and individuals worked together for a year to stock a pantry full of locally produced products for the Festival Über Lebenkunst in Berlin. Skirball Curator Doris Berger will moderate the discussion. A reception follows the program. (“Pantry,” a film by myvillages.org and Martin König. Germany, 2012, 45 min. In English and German with English subtitles.)
About Antje Schiffers and Thomas Sprenger 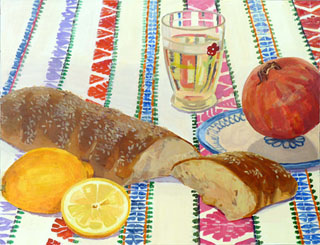 Antje Schiffers and Thomas Sprenger are artists based in Berlin, Germany, who often utilize participatory working methods in community spaces such as museums, factories, large companies, farms, and schools. Antje Schiffers studied art at the Braunschweig University of Art and has been exhibiting in Germany and around the world since 2000. She has had solo exhibitions at prestigious institutions such as the Secession Vienna, Museum of Contemporary Art Leipzig, and the Sprengel Museum Hannover. Thomas Sprenger studied economics and chemical engineering and had his own company in Berlin before joining Schiffers as a collaboration partner in 2004.

On view now through September 1, 2013. Admission to all other exhibitions: $10 General; $7 Seniors, Full-Time Students, and Children over 12; $5 Children 2–12. Exhibitions are always free to Skirball Members and Children under 2. Exhibitions are free to all visitors on Thursdays. For general information, the public may call (310) 440-4500 or visit www.skirball.org.