Skip to content
October 10 thru 12…Time for the 11th Annual Other Venice Film Festival!

The Other Venice Film Festival (OVFF), a community event dedicated to screening full-length, short and animated films that embody the spirit, energy and diversity of Venice, returns for its Eleventh season with three days of film screenings, panel discussions, local artists, parties and live music from Friday, October 10th through Sunday, October12th. See our Upcoming Events Page for full schedule. 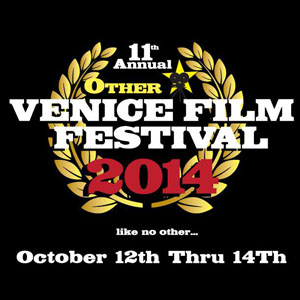 Opening night Friday Oct 10th will celebrate with World Premiere Short Film 1%ers Director Francesca de Sola A story about Hollywood, and the surreal world inhabited by OLIVIA, Michelle Rodriguez & Rie Rasmussen a star whose glamorous life has been turned upside down following a recent crisis on set. 1%ERS places Olivia at ground zero in the collision between two subcultures which operate outside the rules followed by society 99%: Celebrities, and outlaw motorcycle gangs.

Q& A Session with the filmmakers will follow and an after party will complete the evening with live DJ, libation and food. Conrad The Voice Contestant will kick the evening off with live music starting at 7pm.

The festival’s music video competition series will follow at 9:00 p.m., including the World Premiere of Never Never By Korn and the Venice debut of International touring act live band performance of Musiciens Sans Frontieres. MSF is a New York City based alternative rock project, with members originally hailing from the U.S.A., Austria and Columbia. The band fuses alternative rock with world beats and experimental soundscapes, encompassing a spectrum from goth and grunge to world beat, ska and folk-punk. Tickets are $ 10.00. includes after party.

On Sunday Oct 12th, the day begins at 12:30 pm with the Feature Film Damn Foreigners Director Saeed Khoze. A hard-working Middle Eastern man learns the bitter truth about what it means to be an American citizen as a foreigner.

The OVFF is a not-for-profit community event dedicated to screening full- length, short and animated films that embody the spirit, energy and diversity of Venice, California. From our humble beginnings in 2004 with only 14 films, the OVFF doubled in size each of the next three years. In 2012 seventy-five filmmakers from the area and abroad – including Australia, England and Germany – descended on Venice for four days of film screenings, premieres, sell out crowds, spirited Q&A sessions, panel discussions, local art on display and parties with live music and DJs.

Named after Venice founding father Abbot Kinney, the Abbot Award ceremony begins at 8 p.m. Sunday is free to the public and will be followed by closing night party. The Abbot Awards ceremony at the Beyond Baroque is free and open to the public. Day of tickets will be sold at the door (based on availability). 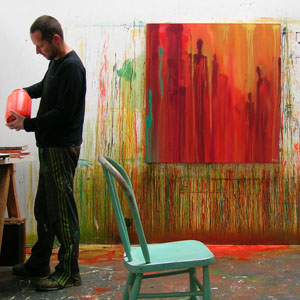 The featured artist in 2014 is Gary Palmer painter from Belfast, Northern Ireland, now living in the US. After graduating with an MA in Architecture from the University of Edinburgh, he traveled around the world as a street-painter. His anamorphic perspective drawings have been featured at International festivals in Europe, Australia, and America, and published in, ‘A Carpet of Dream’, by RJD Enterprises, ‘3D Street Art’, by Tectum. A series of narrative paintings entitled ‘the Road to Zanzibar’, form a record of travels in East Africa. Some of his work is included in the collection at the Ulster Museum, Belfast, and he was invited to participate in the Biennial del Sur, Panama, in 2013.

His current works are abstract paintings for contemplation on the ‘nature’ of nature.Work is on display at our Beyond Baroque location on October 10-12, 2014

For a full schedule of film screenings, a synopsis of each film and additional information on Website. Tickets are available through the Other Venice Film Festival website. Single event tickets are $10; tickets for the opening October 10th friday night screening and party are $30.00. Purchase tickets – here.

What: The Other Venice Film Festival
Where: Beyond Baroque, 681 Venice Bl. Venice, CA 90291
Website:  http://www.othervenicefilmfestival.com/