LA Art Party sponsors the 35th Year Celebration of SPARC and we will be raffling off two sets of tickets….($70 value) for the party on October 20th. You know the drill…find the code Phrase and email us at laartparty@gmail.com and you will be automatically entered. You have until October 18th (It’s been extended) to win and be sure to include your phone #, so we can reach you!!!

At the center of The Social & Public Art Resource Center’s (SPARC) mission and practice is an emphasis on education and engaging community youth in the production of public art. From the community cultural center it has called home at the Old Venice Police Station, SPARC has taken work to the blighted streets of skid row, to agricultural fields of Guadalupe, CA, to concrete flood control channels of Los Angeles, to Gorky Park, Moscow. 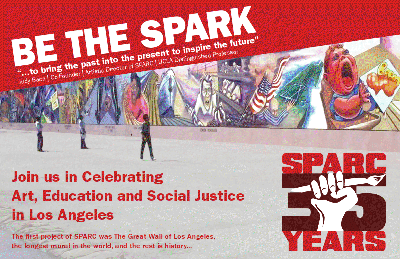 The Siqueiros Award, given to a muralist, goes to Francisco Letelier. As a Chilean exile, he arrived to Los Angeles in 1985 carrying parts of a national culture that had been silenced by a military dictatorship. Letelier creates art that crosses disciplines and cultures while building connections between nations and individuals.

The SPARC Founders’ Award, given to a key supporter of SPARC’s work, will be awarded to
Antonia Hernández, President and Chief Executive Officer of the California Community
Foundation (CCF). Hernández is nationally recognized for a career spanning three decades in social action and the nonprofit sector, expertise in philanthropy and a lifelong devotion to underserved communities.   CODE PHRASE: Be the SPARC for ART

The Judy Baca Social Justice Award, given to a key community leader, will be awarded to Maria Elena Durazo on behalf of the workers of Los Angeles. Maria Elena Durazo is widely regarded as one of the most powerful and savvy union organizers in the United States. On May 15, 2006 she was elected to serve as the Executive Secretary-Treasurer of the Los Angeles County Federation of Labor, AFL-CIO, an organization, which represents more than 800,000 workers through more than 300 separate unions. 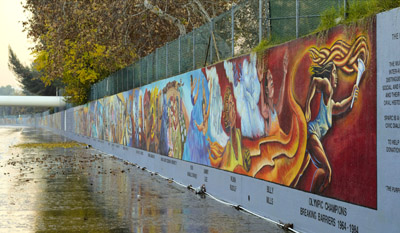 Karina Perez, a former student at Miguel Contreras Learning Complex and currently a UCLA and DREAM ACT student states that her ambition and dedication to the arts was a powerful force in bringing her to UCLA, even when deeply rooted social and political challenges threatened to impinge upon her right to an education.

SPARC was founded in 1976 by renowned muralist and Distinguished UCLA Professor Judith F. Baca, filmmaker/director Donna Deitch, and artist/teacher Christina Schlesinger. SPARC has been a catalyst for social change through the arts and a home for artistic innovation – creating public art as a vehicle to promote civic dialogue, foster cross-cultural understanding and address critical social issues.

Information and tickets for all SPARC 35th events are available thru www.sparcmurals.org