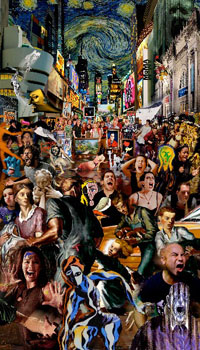 Peter Kempson: 1947-2014
Artist Peter Kempson passed away while working in preparation for his 2014 show. “Peter Kempson: 1947-2014” is a celebration of the artist’s life and a retrospective look at the Los Angeles landscapes and multimedia collage works that defined Kempson’s point of view. From his urban Los Angeles street scenes to more recent playful explorations in mixed media, Kempson enjoyed engaging in humorous social critique. Familiar icons from pop culture are digitally layered to create satirical situations and landscapes that dance between fantasy and reality.

From a collaged portrait of director Steven Spielberg composed of his film posters, to a tongue-in-cheek depiction of communist revolutionary “Chairman” Mao Zedong portrayed in a sea of chairs, Kempson’s work encourages the viewer to critically examine our societal values. Injecting color and comedy in his invitation to peer into ornately detailed scenes, Kempson beckons viewers to take a closer look at modern society.

Everything Glass, Diane Rudnick Mann
In her latest body of work, artist Diane Rudnick Mann continues to highlight beautiful detail in the everyday. Using photorealistic techniques with pastel, Mann transforms ordinary, overlooked, and unseen objects into the extraordinary in her new series, “Everything Glass.” Seemingly simple moments in time are preserved for posterity as Mann skillfully captures the high contrast highlights, shadows, reflections, and transparent brilliance of glass. 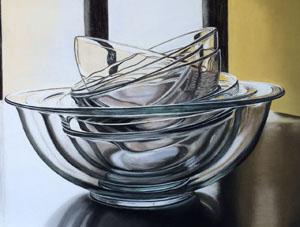 Whether portraying a vase of flowers, stacked bowls, or assorted silverware, Mann’s compositions are expertly crafted with precise finesse. “We are forced to look, to gaze intently at the usual,” says Mann. “Otherwise you would walk by and never notice.” The solidarity of each focal point draws the viewer in as the lines between photography and painting are blurred. Mann is an award winning artist with work previously featured in American Art Collector and American Artist magazine publications. She is also a Signature Member of the Pastel Society of America and International Guild of Realism.

ten thousand things, Gary Polonsky
In his current exhibition, artist Gary Polonsky furthers his experimentation with various mixed media to create dynamic three dimensional works. The artist casts a wider net in his new series, transitioning from previous explorations in food and sweet confections to a botanical inspired collection. A vibrant forest floor mushroom extends from soil-covered hands in works like “Amanita Muscaria.” Equipped with a 3D printer, Polonsky says he found a new sense of freedom in his sculptural techniques and utilized a variety of media in his latest work – from styrofoam and balsa wood to traditional canvas surfaces. 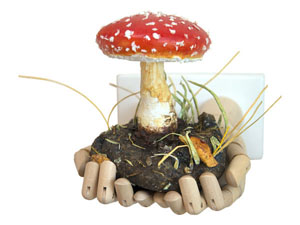 His show title, “ten thousand things” makes reference to ancient philosopher Lao Tzu’s writings of the innumerable mysteries of the universe and the individual’s role within it. “With the death of my friend and fellow artist Peter Kempson, whom I am honored to show with one last time, a great emphasis has been realized for me to maximize my time [and] my efforts,” says Polonsky. His object – to create art that captures the essence of our time and place with a passionate, unified voice.