Hauser Wirth presents a new exhibition by Maria Lassnig. The online exhibition is currently on view now – CLICK HERE. The work of Maria Lassnig, one of the most significant painters of the contemporary era, is marked by its unrelenting probing into themes of the body and its meaning. “Maria Lassnig. Me, Encircled by a Fly,” is a special selection of the artist’s works on paper and canvases between 1987 and 2005. It explores this preoccupation with the physical presence of the body – a concept the artist coined as ‘body awareness.’ “I searched for reality that was more fully in my possession than the exterior world,” Lassnig remarked. “I found it waiting for me in the body house in which I dwell, realest and clearest reality…”Taking its title from an eponymous self-portrait painted in the 1990s, the presentation considers myriad interpretations of the physical that Lassnig depicted throughout her oeuvre.” 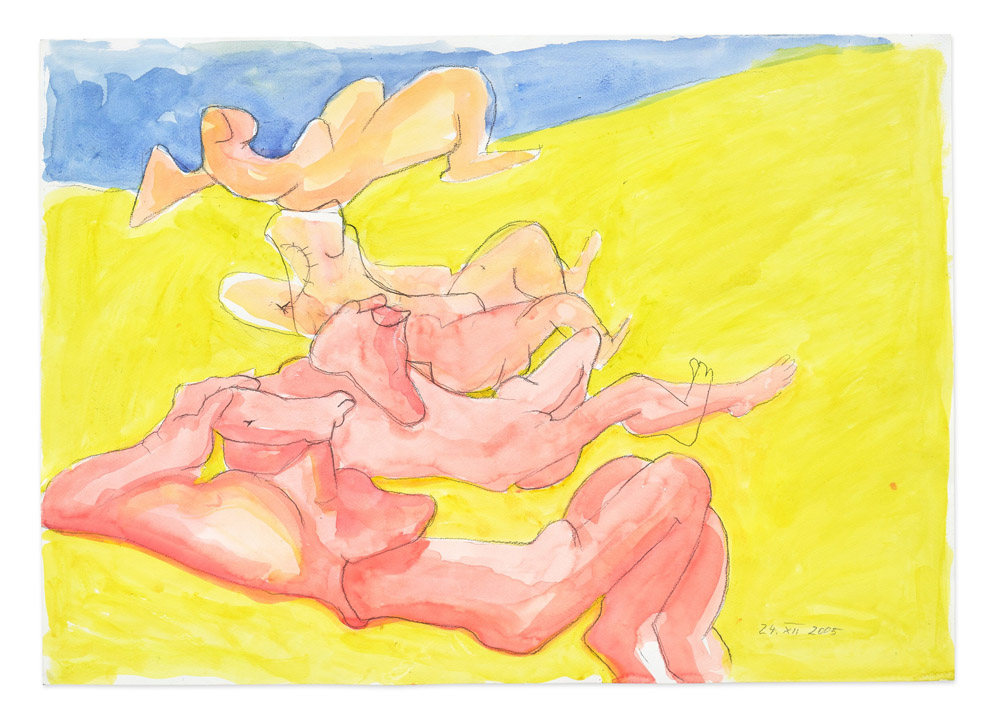 The exhibition is presented in close collaboration with Peter Pakesch, Director of the Maria Lassnig Foundation, who explained, “From the outset of her career, Maria Lassnig explored physical sensations and the possibilities of perception of her own body as paradigms for artistic expression. She saw everything through this relationship between the body as the primary medium: the medium of perception, as well as the medium of action. It is a body that suffers, acts, represents, presents, forms and distorts itself, and perceives… The body dissolves, metamorphosing into mythology or machines, and reassembles itself in constantly new ways.”

The presentation coincides with the new publication ‘Maria Lassnig. Letters to Hans Ulrich Obrist. Living with art stops one wilting!’ by Verlag der Buchhandlung Walther König. Obrist states in the preface of the book: ‘[Lassnig] sees transcendence as beginning with the body. It is based on the relationship between the body and the image, and is translated into what she calls ‘body awareness’ paintings and drawings….physical manifestations of a steady resistance to the repetitive and the static.’ Hauser & Wirth has collaborated with Obrist on a series of new online interviews and readings of the artist’s letters on hauserwirth.com to celebrate its release. Participating voices include readings from artists Camille Henrot, Nicole Eisenman, Julie Mehretu, and an interview between Obrist and curator Kimberly Drew.

For more information about this exhibition, visit the website – https://www.hauserwirth.com/