Soul of a Nation: Art in the Age of Black Power 1963-1983 officially opens on March 23, 2019 at the Broad. The internationally acclaimed exhibition celebrates the work of Black artists made over two decades, beginning in 1963 at the height of the civil rights movement. The Broad, which attracted a record 815,000 visitors in 2018 (the museum’s highest annual attendance in its three-year history), is debuting this exhibition on the West Coast. 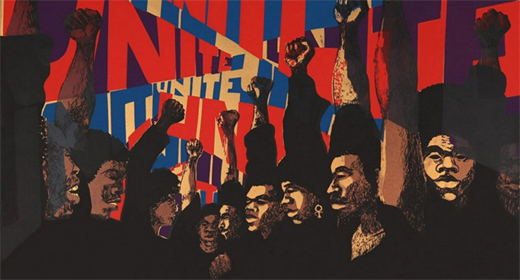 The Broad will present a day of enriching conversations, artist talks and poetry. Probing themes such as the politics of Black exhibitions and of Black Power, Art and Politics: Soul of a Nation Symposium is organized by UC Irvine professors Bridget R. Cooks, an art historian and author of Exhibiting Blackness: African Americans and the American Art Museum, and Frank Wilderson, a writer, poet, scholar, activist, filmmaker and former elected official in the Congress of South African Writers and the African National Congress, as well as the author of the books Red, White & Black: Cinema and the Structure of U.S. Antagonisms and Incognegro: A Memoir of Exile and Apartheid.

The event will include compelling conversations between artists featured in the exhibition, such as Jae and Wadsworth Jarrell and Gerald Williams in conversation with Vida L. Brown (visual arts curator, California African American Museum), among others, as well as renowned art historians and curators like Thelma Golden (director and chief curator, The Studio Museum), Phyllis J. Jackson (associate professor, art history, Pomona College), Kellie Jones (professor, art history and archaeology and the Institute for Research in African American Studies, Columbia University) and Naima J. Keith (deputy director and chief curator, California African American Museum). A reading will be given by distinguished poet Kamau Daáood, author of The Language of Saxophones: Selected Poems of Kamau Daáood and the critically acclaimed album, Leimert Park. Darren Walker, president of the Ford Foundation, will speak in conversation with Academy Award-nominated filmmaker Ava DuVernay, director of the films Selma and 13th, and the upcoming series Central Park 5. DuVernay is also the founder of ARRAY, a distribution company dedicated to the amplification of independent films by people of color and women.

Admission is $18 per person; CLICK HERE to purchase tickets to the exhibition; The Broad is offering free admission to “Soul of a Nation” every Thursday from 5-8 p.m. (last entry at 7 p.m.) during the exhibition’s run. Tickets for the symposium are available now at www.thebroad.org/programs. The Broad is located at 221 S. Grand Avenue, LA 90012; https://www.thebroad.org