Skip to content
Runs Through April 14, 2019: The Sound of Murder

The Sound of Murder is a murder mystery written by William Fairchild (1918-2000) which premiered in London in 1959. This production directed by Adrian Neil, is exactly the kind of British murder mystery that Theatre 40 audiences have come to anticipate each season. It and is full of dark, naughty fun. 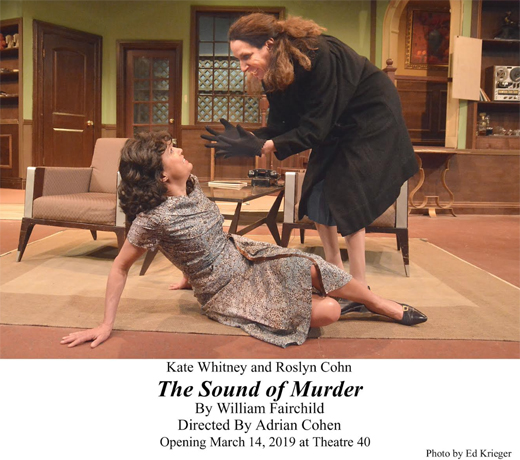 The Plot: Charles Norbury is a wildly successful author of children’s books. He hates children, and pretty much anyone else, too. He’s petty, cruel, vindictive, and treats his unloved wife like a slave. He also refuses to have children with her. In short, he’s the sort of fellow who would make the world a better place if only he would just die. Anne, the wife, has found some solace in the arms of her handsome lover, Peter. Charles won’t grant her a divorce: It would damage him professionally with the parents of his juvenile fans. The one person who has real regard for Charles is his loyal secretary, Miss Forbes. She is infatuated with Peter. Anne and Peter deduce that the only way they will ever be to be together forever is if they kill Charles. They come up with a scheme to effect his murder. But things just don’t go according to plan…..

The plot continues with more twists and turns than the Arroyo Parkway. Surprise follows surprise, and you’ll be kept guessing as to what exactly the heck is going on until the very end. The cast of The Sound of Murder includes Roslyn Cohn, Gabriel Olivas, David Hunt Stafford, Peter Trencher, David Westbay and Kate Whitney.

Admission is $35. Theatre Forty is located in the Reuben Cordova Theatre on the campus of Beverly Hills High School. There is ample free parking beneath the theatre, which can be accessed from the intersection of Durant and Moreno Drives.