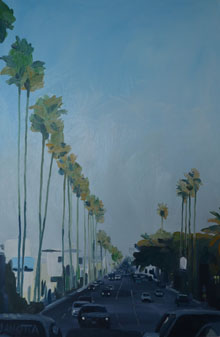 LA is a city of commuters. We spend countless hours getting to and from our jobs. Dan Janotta’s interest is in these hours. We drive as the sun rises and sets, yet we generally only appreciate this when the backdrop is a panoramic view of the ocean, city or mountains. Janotta’s paintings illustrate the beauty and serenity in those moments that the rest of us just try to rush through. He see’s what most of us can’t wait to get past. Streets of LA reintroduces the viewer to his/her surroundings. The work reminds us to take everything in and see the beauty that is all around.

Janotta’s painting style and compositions reflect the Southern California environment of strong sunlight, dense vehicular movement, and beautiful landscape. His oil paintings have distinct brush strokes that help to define the areas of color within the composition and provide a level of abstraction for the realistic content.

Figuring It Out, Shelley Lazarus

The figures that Shelley Lazarus captures in this show are very personal to her. Models who have become friends over the years, family, or just people she may have met or seen and photographed on one of her many trips. 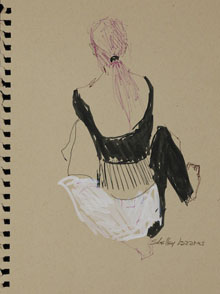 She tries to capture their emotion and involvement at the time, through various mediums and styles. The painting methods for these figures are varied depending on how she wants to portray them. She never hesitates to experiment with new papers, inks, graphites or even crayons.

Shelley was born and educated in new York, where as a teenager she attended classes at Pratt College while still in high school. As a founding member of TAg she takes great pride in the gallery and her ability to present her work there. Her works have received numerous awards and her paintings can be seen in both private and corporate sectors here and abroad.

All proceeds from this show will go to the Robert David Lazarus Pulmonary Rehabilitation Unit at Cedar-Sinai Hospital.

Rather than her usual tack of capturing people in public places, she has chosen to explore figure painting with more attention to the form. She still conveys a certain mood or air to each figure, expressing the feelings of the models through the tone of the moment captured in time. Immediacy is not a focal point in this series. This time out, Sheinbaum reveals a different side of her work; one of calm, pensive and thought-filled subjects.