Having been born and raised in NYC, 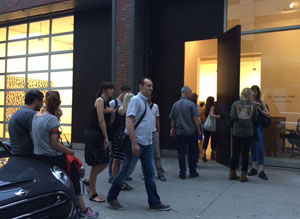 it was like slipping on a comfortable old shoe. As always, the energy of the city was bustling, and the New York art vibe had grown even stronger. I spent an entire day exploring the new location of the Whitney Museum.

As far as art parties…I found some fun ones. I did most of my art-hopping in Chelsea, home to the popular tourist attraction – the High-line. When I lived there, the High-line was an abandoned El train (as we called it), and Chelsea was a wasteland overrun with prostitutes and drug dealers. Covert operations occurred amidst the looming storage rental warehouses where many of us diehard New Yorkers (living in studio apartments) dared to stash our precious crap while others fled to Long Island and Jersey. Flash forward…Chelsea is one big hoppin’ art party, complete with an artsy swag. It took me three hours to get through the many art openings from 24th Street to 26th Street – whew – lots of new galleries. 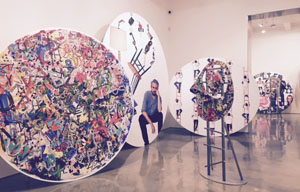 At Metro Pictures, artist Olaf Breuning offered his bigger than life oval and round steel collage. These were quite impressive – some standing at 9 feet tall. A humorist, the artist pokes fun of the multi-faceted inundation of new technologies and everyday demands of our modern life. Through his art, he accesses the power of what we are all forced to deal with in today’s world. Definitely worth a view…be sure to pop in before August 6, 2015. Metro Pictures, 519 West 24th Street.

One of the earlier art parties that I attended was probably my favorite exhibition. “Efflorescence” debuted new works from Zhuang Hong Yi, Ellen de Meijer, Gavin Rain, and Alexi Torres at UNIX Gallery…and no, my enthusiasm for the exhibit had nothing to do with the fabulous wine they were serving (though it didn’t hurt).

I was completely blown away by Zhuang Hong 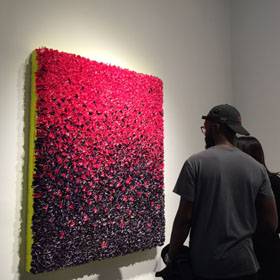 Yi’s work: Intricate petals made of what appeared to be paper…each delicately wrapped as one flowed gracefully into the next. A striking view from afar which became even more extraordinary up close.

The same can be said about the work of Gavin Rain. Viewing his art while standing in different parts of the gallery unveiled engaging nuances that had not been previously revealed. Rain brings traditional pointillism into the digital age while inviting his audience to participate in the metamorphosis of the work. “Efflorescence” runs through August 22, 2015. UNIX Gallery, 532 West 24th Street.

Continuing my art party hop, I continued to 11th Avenue, where I followed a crowd into a building and then up an elevator. What happened to my New Yorker instincts – I’ll never know! Luckily, the elevator opened up and there before me were many friendly faces and a bustling reception for Gallery Artists XII at Walter Wickiser Gallery, Inc. You can catch the group exhibition through August 19. Walter Wickiser Gallery, Inc., 210 11th Ave #303.

Next, heading east on 25th Street, I found a hip edgy crowd at Marlborough Chelsea, 545 West 25th Street. Then continued down the street to Clamp Art, who specializes in photography. The group exhibition “Six Degrees” showcased the work of the 2015 RISD MFA Photography Program graduates. I enjoyed the young energy here…great to see a new crop of artists coming onto the scene. Clamp Art, 531 West 25 Street. 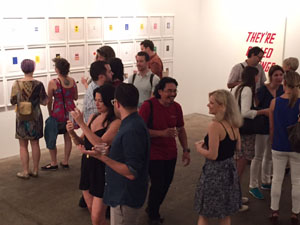 The pop artist created a painting every day and reached out to his social media audience for daily feedback. Perhaps one would say that the exhibition was co-curated by the followers of Patt, since they ultimately helped to decide which artworks would be exhibited.

The artist makes use of simple images and cliché sayings to comment on the striking state of consumerism. “Bigger. Smaller. Funnier.” runs through August. Winston Wächter Fine Art, 530 West 25 Street. 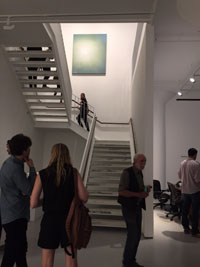 galleries were all quite different…offering a broad range of eclectic shows. Some of the venues were just as spectacular as the art. Several had upstairs and downstairs galleries, such as Fergus McCaffrey located at 514 West 26 Street (see image) I just loved the art here.

On the other end of the spectrum, I came across Rodi Gallery, a mobile gallery founded in 2013 by artists Elise Graham and Aaron Graham. Apparently a performance of some sort had just occurred…I was on a tight schedule however, so I quickly moved on (but I loved the idea).

Another incredible gallery space that I stopped into earlier in the day was located just off 10th Avenue. Jim Kemper Fine Art welcomed art patrons into its gallery with a luxurious entryway displaying glorious steel sculptures from artist Ewerdt Hilgemann. Once inside, the art of Jasper John caught my eye along with work from William Kentridge, Stanley Casselman, and more. Upstairs, a glass wall opened up the space and gave the feeling that one could just fall out onto 10th Ave. This is an architecturally disarming gallery featuring an illustrious list of renowned artists. Jim Kemper Fine Art, 501 West 23 Street. 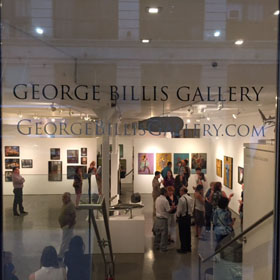 Wrapping up the art party hop, I headed to the George Billis Gallery. Upon entry, one could see the entire exhibition laid out below. The work of Julian Cardinal was on view along with several other gallery artists. I finally had the chance to meet George Billis. As many of you know, I often list openings for the Los Angeles location of this gallery. Having dealt with Tressa Williams (director of George Billis Gallery, LA) for many years, it was great to finally meet George, an extremely affable man. George Billis Gallery New York, 525 West 26 Steet.

Finally, I briefly popped into James Cohan Gallery to catch an eclectic group exhibition curated by Tina Kukielski titled “All Watched Over,” on view through August 7, 2015. James Cohan Gallery, 533 W 26th St.There is a photo of this gallery at the top of this article.

Stay tuned for more out of state adventures…Yeah, Mama’s got a lot planned for you.