On Friday, June 1st, 28-year old artist Jonathan Lyndon Chase’s solo exhibition, titled “Sheets,” will open at Kohn Gallery. For his first major show in Los Angeles,  Chase will examine life as a queer, non-binary member of the black community through his paintings and works on paper influenced by his personal, day-to-day experiences and struggles with identity and gender politics. 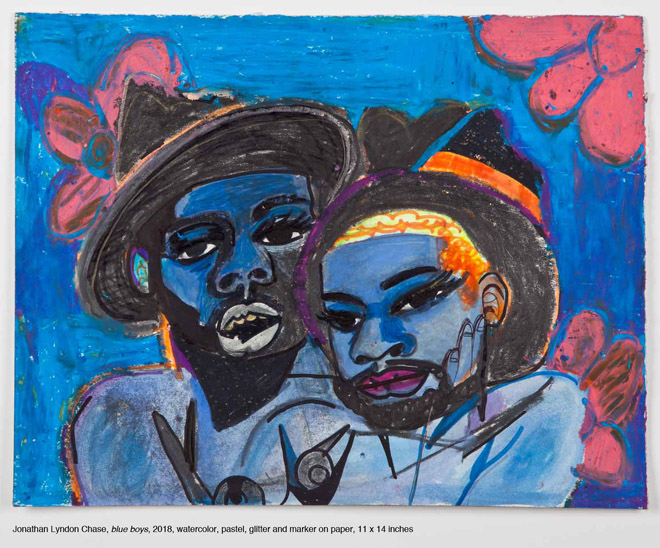 Introducing personalized yet heavily contorted figures in more conventional, safe environments, Chase’s figures are allowed to experiment with new forms of non-binary gender expression— coupling watches, track pants, and Nikes with hoop earrings, eyeshadow, and lipstick. His use of gendered items and symbolization, such as fashion and make-up, is rich in Ball Culture, an underground subculture that has thrived for generations as a haven for LGBTQ people of color, depicts the suppression and presentation of gender exploration within public and private spaces. As a minority within a minority, many of Chase’s colors and cues are inspired by music and pop culture aesthetics common in the 90s-era black community in which he grew up.

The title of the exhibition, Sheets, alludes to Chase’s use of bedsheets as a base material, allowing viewers to literally and metaphorically share in his domestic spaces, which for Chase function as safe spaces. Sheets is a reference to where we begin our day and end it, an element of our day- to-day lives that allows us to unravel or disrobe the layers of multiple identity we maintain for the outside world in order to live.

For the past several years, Jonathan has been pushing the envelope by putting raw, heartfelt images of queer sexuality in front of the art world. We’re excited to see what he has in store for his LA exhibition and happy to see young, LGBT artists of color receiving much-deserved attention and support from premiere galleries.