Fifty-four years after his death, C.S. Lewis’ books are as popular than ever; The Times of London ranked him eleventh on their list of the fifty greatest British writers since 1945. His famous book series The Chronicles of Narnia collectively have sold 100 million copies in 47 languages and enchanted generations of readers around the world, and the other two-dozen books he wrote have also sold upwards of 100 million copies. 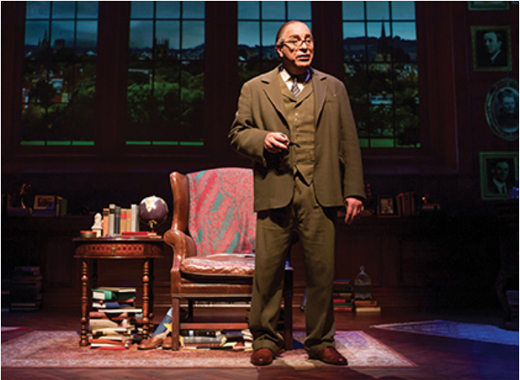 Photo courtesy of The Broad Stage

In his day, his lectures on medieval and Renaissance literature made Lewis the most popular professor at Cambridge and Oxford (he served on faculty at Oxford alongside his close friend J.R.R. Tolkien.)

In C.S. Lewis Onstage: The Most Reluctant Convert adapted from Lewis’ own writings, Lewis tells his story of the death of his mother and his estranged relationship with his father and as a World War I veteran witnessing from the trenches a waste of life – concluding “either there was no god behind the universe, a god who is indifferent to good and evil, or worse, an evil god.” This play then explores how he became one of the most vibrant and influential Christian intellectuals of the 20th century and arguably the most influential spiritual and religious writer of the past century.

“He had one of the great minds of the 20th century,” said Max McLean, who plays Lewis onstage “and he applied his formidable wit to engage audiences about his own experience of converting from atheism to faith.” C.S. Lewis Onstage: The Most Reluctant Convert starring Max McLean as C.S. Lewis has eleven performances at The Broad Stage Thursday, July 11 to Sunday, July 21, 2019.

Admission ranges from $55 to $95 per person; CLICK HERE to purchase tickets. Read a review of this production on the Performance Reviews Page under the Theater drop-down or CLICK HERE.

What: Performance
Where: The Broad Stage, The Most Reluctant Convert
When: July 11 – 21, 2019;
Website: https://www.thebroadstage.org/