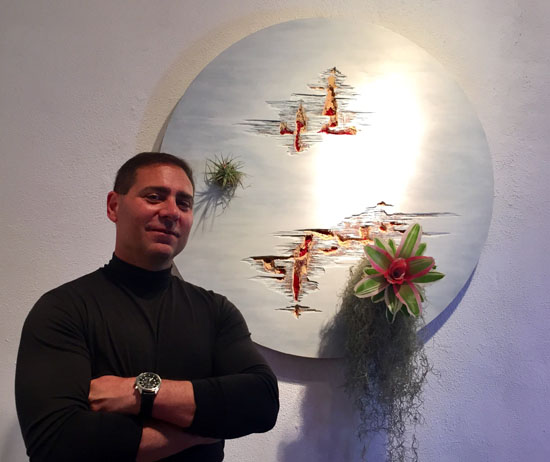 artists deal in the currency of the natural world. Through their application of awareness of an inter-connected reality and their unique processes, their work transcends the very world that inspires it.

Included in this exhibition are works from Michael’s series, Arctic Metamorphosis. Their vast, white empty spaces recall an icy desolation and are punctuated with wound-like divots and abrasions. Despite this seeming inhospitable ground the surfaces sprout new growth in the form of plants that need little in the way of nourishment to thrive. Beaten and scarred industrial plywood is rendered natural and elemental once more from his very human effort to shape reality. Michael states that he is addressing the evolution of the natural world, the new growth that happens even as the destruction of global warming takes place.

New works from Aline Mare’s Cryst-aline Series and Cloud Seeds will be on view as well. Aline incorporates the minutiae of existence – seed pods, stems, and leaves (all captured in extreme detail) on a backdrop of the expanse of the atmosphere – weather images from NASA and hand painted backgrounds. In rendering this level of divine precision against transcendent, color and texture she gives us a vision of a beautifully infinite and complex backdrop against which the details of the natural world play out.

Aline’s work is informed by a technical journey that in the end provides a luminous visceral and emotional experience. “Using the illumination of the scanning machine as an original light source, I use digital scanning as a contemporary interpretation of the 19th-century photographic process of cliché verre, literally a Greek phrase meaning, “glass picture”.

Born in Los Angeles California, Michael Giancristiano is an accomplished artist with over 25 years of exhibition history. He is best known for his sculpted and deconstructed wall reliefs that explore nature through the medium of plywood. He has exhibited internationally as well as nationally, has won numerous awards and can be found in many private and corporate collections. In addition, he has served on the Advisory Board of the Orange County Center for Contemporary Art. Currently Michael sits on the Board of Directors of the Inglewood based, “Van Hook Foundation”. 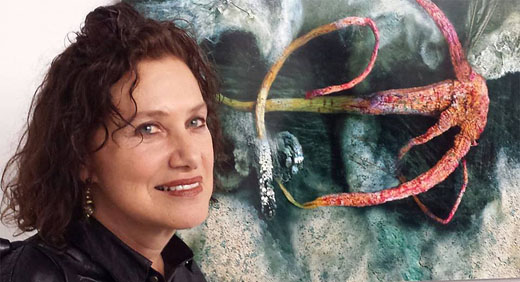 ine Mare began her career in the Lower East Side of Manhattan, coming out of a background of theatre, performance and installation art. She was an early member of Collaborative Projects, a collective formed in downtown New York City and performed in a multi-media partnership, Erotic Psyche, a film and music extravaganza exploring the body and the senses, which toured extensively in Manhattan and Europe throughout the 80s. She received an MFA from the San Francisco Art Institute in 1990 and has received several grants and residencies. New mixed–media works have been exhibited at Turtle Bay Museum, Santa Monica Museum, Headlands Center for the Arts, Printed Matter and James Fuentes Gallery in New York and an upcoming solo show at MOAH in 2017.