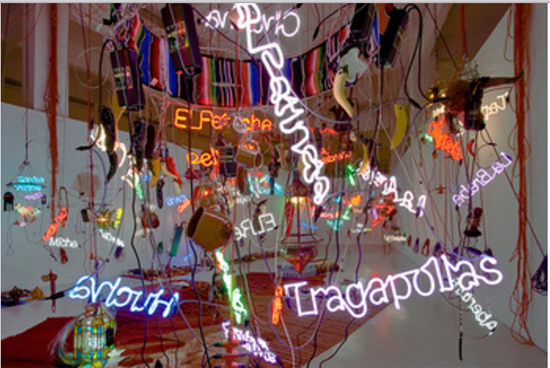 While Rhoades’ groundbreaking installations found early recognition in Europe and New York, the artist spent the entirety of his career in Los Angeles, where he lived and worked until his untimely death in 2006 at the age of 41. The exhibition at Hauser Wirth & Schimmel is conceived to share and celebrate his unwavering vision of the world as an infinite, corpulent, and lustful universe of expressive opportunity. Assertively pushing against the safety of cultural conventions, Rhoades broke accepted rules of public nicety and expanded the frontiers of artistic opportunity through unbridled, brazenly ‘Maximalist’ works. In short, Rhoades brought the impolite and culturally unspeakable to the center of the conversation.

The exhibition exclusively focuses upon six immersive installations, occupying 28,000 square feet in the North and South Galleries at Hauser Wirth & Schimmel. These works will be shown as they were conceived and exhibited by the artist during his lifetime. ‘Jason Rhoades: Installations, 1994 – 2006’ is organized by Paul Schimmel in close collaboration with the Estate of Jason Rhoades. The exhibition will be accompanied by a fully- illustrated catalogue, documenting all of the installations in the show.