The Los Angeles Food and Wine Show is back. Today’s events run from 11am to 10pm – be sure to check the website for a full list of events.

Fiesta La Ballona, Culver City’s annual “Party in the Park” kicks off tonight August 26, and runs through 28, 2016 at Veterans Park. The weekend will feature carnival rides and games, live performances, over 100 booths featuring artisan wares, vendors and local groups, a petting zoo and pony rides, a beer and wine garden, food trucks and a food court, sustainability activities and other special contests and events.

Admission to the Fiesta is free. Live entertainment on the stage is also free. Food, drinks, rides and other attractions cost extra.

Head to 18th Street Arts Center…Join Artist Lab Resident, Shana Lutker for an exclusive performance-in-progress, lecture and preview of her upcoming show, “The Sleeping Poet and the Jongleuse,” in 18th Street’s Main Gallery.

This performance will center o

n about a fistfight that took place on July 2, 1925 between Symbolist and Surrealist artists at a banquet in Paris. The performance, situated within Lutker’s sculptural installation in the Artist Lab, will incorporate the poetry of Symbolist Saint-Pol-Roux, excerpts from The Juggler (1900) by controversial French author Rachilde, and the Surrealists’s documents of protest. The tale of the fracas will be punctuated with chandelier-swinging, juggling, and music with running time of approximately 50 minutes.

Based on the fourth chapter of her ongoing research project, Le “New” Monocle: The History of the Fistfights of the Surrealists, this Performance-in-Progress is a primer and behind-the-scenes look at Lutker’s upcoming show, “The Sleeping Poet and the Jongleuse,” presented by LA>September 14 and 15 at TAIX in Echo Park.

This is a FREE event –  Click here to register.

The Los Angeles Zoo’s Roaring Nights summer music series keeps the beat rockin’ with a party for ages 18 and up that transforms the evening into one big hipster hot spot tonight. Black Crystal Wolf Kids’ high-energy antics will have indie rockers singing along to music from the likes of Hozier, The Black Keys, Pavement, and The Pixies. 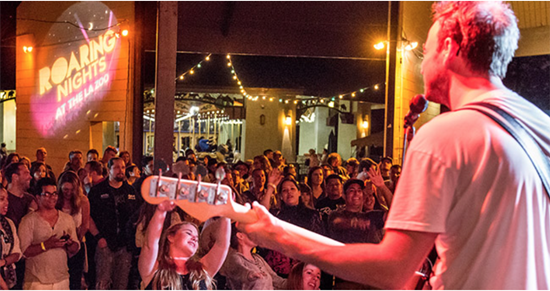 Also featured are killer sounds from other top indie bands including Well Hung Heart, whose high-energy performance and new rock sound derives from a classic rock ‘n roll foundation, mashed with blistering flavors of blues and punk; FifthLaw, whose members describes themselves as “devoted to bringing the crusade of genuine, honestly produced rock n roll,” and Los Angeles based DJ Steve Prior.

Roaring Nights includes L.A.’s favorite food trucks, full-service bars, photo ops, a Game Zone and a “Paint Party” for guests to paint their favorite animal on a small canvas to take home as a souvenir.  The fun continues with pop-up zookeeper talks, animal encounters and visits to animal habitats, and everyone gets to come face-to-face with a special nighttime incarnation of the life-size, lifelike prehistoric creatures of Dinosaurs: Unextinct at the L.A. Zoo.

Admission: $25 for adults 18 and older and $22 for GLAZA members.  For tickets, visit http://www.lazoo.org/roaringnights