The grand opening of the No Free Bread Gallery presents us with a cryptic collection of abstractions from Sara Abbott. Ms. Abbott provides a copious – if not overwhelmingly so – series of enigmatic uses of the primordial elements to fine art. The exhibition itself would be mildly unoriginal were the canvases left high and dry without titles. But with their intentional subtext affixed to each, a hidden layer of symbolism is imprinted onto the subject’s mind. Let’s begin, however, with the technique itself. While disappointingly there is an absent of mind-crunching texture to feast our eyes upon, there is enough swirling, almost centripetal dynamism within each piece which keeps ourselves preoccupied toward the predestination of losing ourselves in the promenade. And this motion is predominated by Ms. Abbott’s assertive paint strokes which lift off the canvas with a sense of nobility – confident in their presence within their designed space, irrespective of how they appear alongside each other. 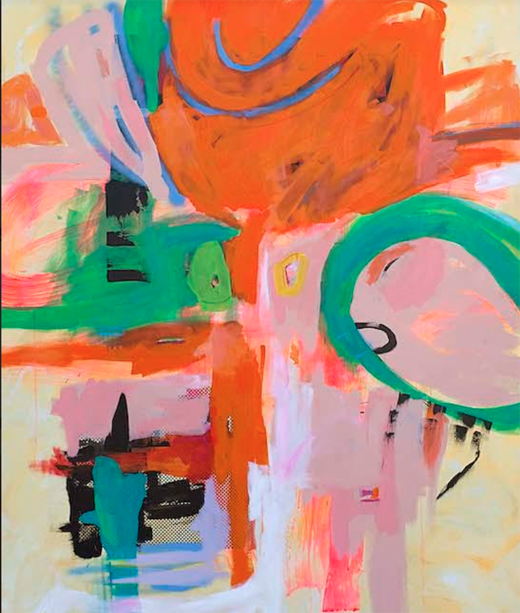 Of course, harmony is needed to avoid a dancing chaos fall into a noisy void of dissonance. And, while it is easy to avoid such a failure using primary colors that can captivate the mind rather than confuse it, the introduction of the debonair blackness to many of the pieces is emblematic of an artist comfortable with her artistry. Her comfortable exercise of this bold contrast brings forward a sense of depth which the works crave.

This depth to the dynamism, to provide a greater fulfillment of excitation among the subject, is what is commonly missing from the works. It is as if the artist purposefully metered herself, choosing a somber poise over drunken Dionysian ecstasy to the canvases. To be certain, such a wildness may have led to more irascible messiness to the canvas; nevertheless, the instances of this daring can be seen in several of the works, indicating an artist reticent about unleashing passionate fury and instead being satisfied with cerebral, serene, gifts to the world.

To further augment the cerebral, and which is a positive aim at abstraction creativity, each of the works are titled mysteriously. I was told that the titles are quotations from contemporary artists, but ignoring that knowledge gives one more latitude for personal interpretation. How, in other words, do we fit the titles to the abstractions? 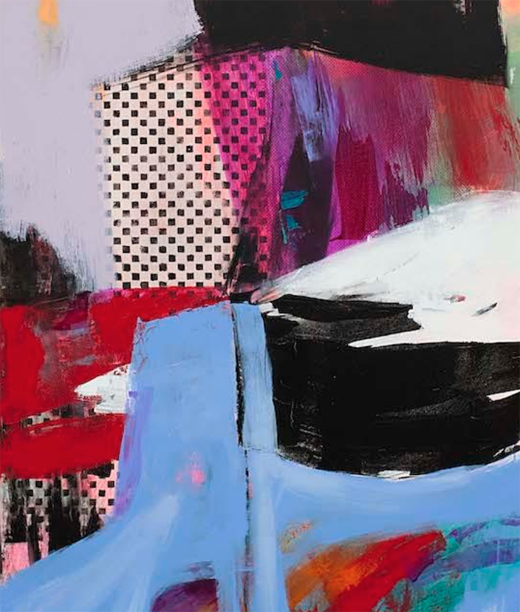 Sara Abbott, When He Came Home He Would Whistle Up The Stairs, 40×30

I interpret each as an expression of the unique motion which accompanies the work, taking literate meaning and providing it with visual substance; “poetry in motion” as it were. They are soft verves of abstract gentleness distinct from each other yet certainly form a continuous whole. Is this gentleness, seen even in the demure composition sizes as opposed to more voracious and ambitious dimensions, symbolic of the wisdom of temperance, as one of many “life lessons”? Is placidness so wrong? In a way, soothing abstractions is quite a feat and is demonstrative of Ms. Abbott’s successfully harmonious undertaking.