Robert Rauschenberg’s influence on the art of Los Angeles, and its influence on him can be seen in starkly gorgeous detail at LACMA now, for the first time in its entirety, in “Rauschenberg: The 1/4 Mile.” He said that if you have “any mind at all” you’ve forgotten what you had in mind when you’ve gone a quarter mile, which is perhaps partly to say that your connections to where you started have been changed by the new things you come across and that catch your eye.

As the press preview group gathered around the Assistant Curator’s discussion of the work, after a few moments I became drawn to the enormity and clarity of the piece and found myself drifting into and toward massive walls of imagery. Normally one does not hear the word clarity when Rauschenberg’s work is discussed perhaps, but his imagery is in fact clear and direct even when juxtaposed, laid next to and on top of, and composited with other images close by and across the span of the 1/4 mile. This is enhanced by his use of found materials along his journeys, which inform the density and emotive power of the work, expand the space of the work from 2D to tactile 3D and thereby bring us closer to it. In one particularly evocative section, a black and white image of a tattered but still strong rope tied around a cement rail dangles on the ground, covered by a seemingly nondescript tan fabric that’s been pasted over a section of the image, revealing the knot. The fabric has a horizontal weave, which leads us across and down to a shot a fence blocking our entrance to a shed beyond. But the fence and it’s dangling wires are referencing the rope dangling above and to the right. The weave of the fence and what’s it pretends to hide is revealing, and revealed above and to the left, again following along the pattern to another piece of fabric laid on top of that, which appears to be a pressing of the fence itself. Close inspection doesn’t reveal the truth one way or another, but as the viewer, we’ve reached the realization that all these things are connected in some way, whether we don’t quite understand, or forgot them altogether. 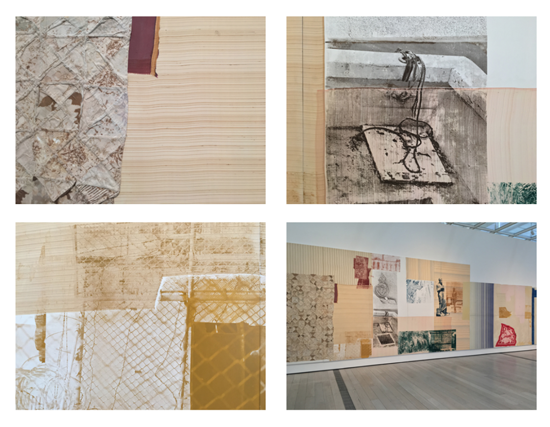 As one continues along the show, whether randomly or from one direction to the others, we don’t lose our connection to the whole, nor to something we just passed. That in itself signals the process and achievements of this momentous work. The copious use of discarded cardboard boxes themselves – whether flattened and joined in hopscotch, or constructed into a curved installation – and the act of collecting and creating is referenced by at least 2 details in the overall 1/4 mile. In one a diagram from the end of a box, of the correct way to close itself, is pasted on another box. Arrows point us in the direction of more pieces of a unique puzzle. In another, the artist’s hand appears visible, whether he wrote what’s on the box or not.

Rauschenberg’s fascination with his city up close is evident. Humorous, wry details add up as we continue throughout the show in whatever direction we choose, connections being made, forgotten and reminded of, then reformed anew. 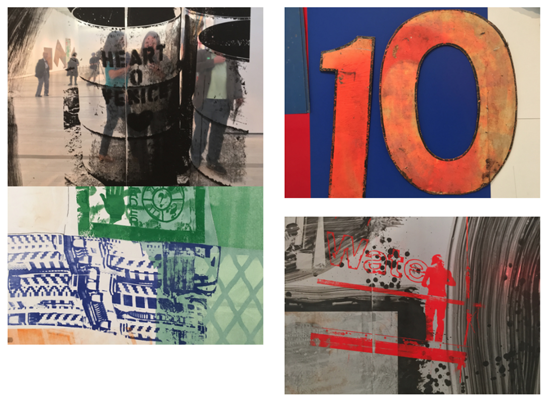 It took Robert Rauschenberg 17 years to create the 1/4 Mile. Seeing it as a whole piece is a privilege and testament to the work Los Angeles and LACMA does to profile us to the world.

Katia Kavistovski, Assistant Curator of Modern Art at LACMA and Michael Govan, Director of LACMA, have done a masterful job with this one. Kavistovski’s focus on art from Southern California is evident, as is her ability to understand how borders and the exchange of objects are an intrinsic part of understanding each other.

Michael Govan, who one to one is personable and attentive, is reflective of the exhibition, states,”Robert Rauschenberg’s The 1/4 Mile or 2 Furlong Piece has always been an inspiration to me. This work is an immersive meditation on the whole world of culture as well as the artist’s own life of ideas. It’s global and personal—a museum of images unto itself.”