Written by Lisa Robins  – “Why did a not-so-nice Jewish girl, expelled from Yale Drama School during the Vietnam protests, abandon her acting dream to follow the man she loved to an off-the-grid commune in Oregon?” Carol Schlanger, author of Hippie Woman Wild: a Memoir of Life and Love on an Oregon Commune answered this question and more at “Sunday Morning at the Braid,” hosted by Jewish Women’s Theatre, on August 11th. 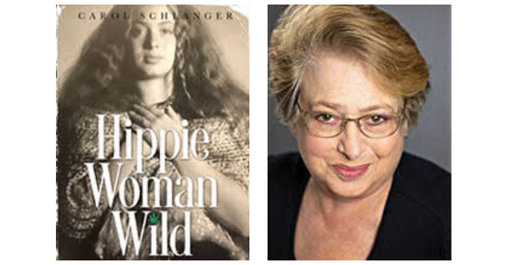 The JWT celebration launching Carol’s first book included a performance, light brunch (bagels and schmear, pastries, fresh fruit and coffee), discussion, and the opportunity to purchase a signed copy. Carol, a beloved JWT Artist in Residence, and her moderator, screenwriter Arlene Sarner (Peggy Sue Got Married), had us in stiches as we learned how Carol made a sharp turn from her upper-east side, upper middle class Jewish upbringing, to become an “Environmental Revolutionary.”

While attending the Yale School of Drama, Carol’s radical spirit emerged in the hit revue, “American Pig,” which played the Papp Theatre, and also featured Henry Winkler, who became Carol’s lifelong friend and wrote the forward of her memoir. Carol met Clint, a handsome Texan studying at the Yale School of Architecture. After getting expelled during the Vietnam protests, she moved to Manhattan to pursue acting, while Clint moved to Oregon. When recession hit, and a man from her building committed suicide (landing on her balcony), Carol “followed the goy [Clint] to the commune, trading acting for Oregon.” She lived the maxim, “If you want change, become the change.” Her refreshingly open and honest reactions to her new life included, “I no longer knew who I was…I was a crappy hippie…did I really want to eat squirrel?” Her friends were “being professional actresses, she was being a pagan.” 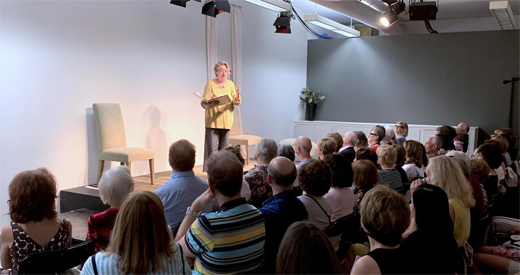 The packed house at the Braid howled as Carol read a chapter from her book, which described how she used the acting talents she honed at Yale to get food stamps. She made up a family based on the band Country Joe and the Fish, naming her imaginary children 5, 2, 7 and 8. Adopting a back woods accent, she rubbed herself with their communal goat, then borrowed a sleeping toddler with caked-on snot from “Boston Mary” in the waiting room. She scored $1800 worth of food stamps. “My acting classes at Yale had borne fruit, literally! Thank you Stella Adler…” As she put it, “Stealing came naturally…I’d been shoplifting since I was 10.” “Never ever do anything illegal where you can get caught,” Carol quipped, “Steal this book!”

Carol confessed that she’s actually a “closet capitalist”: she could share food, but couldn’t bring herself to share possession of the 160 acres on the Oregon coast that she owned. But life on “Flores Creek Commune… liberator of funds” was “like a kibbutz; socialist, sharing.” When living off grid, “you’re naked and afraid-happy the others are there, even if you can’t stand them…actions [come] to the forefront.” They were stoned all the time — it was everywhere — they grew it. Everything slowed down, Carol could spend “two hours watching a leaf…Some reach enlightenment…some go crazy.” Living in tents on platforms with an outhouse, they bartered to survive: blackberry jam for dental work; marijuana for gas. They followed stereotypical roles: “Men were stronger– they did chores women didn’t want to do, and vice versa.” The Oregon locals weren’t “like Billy Jack,” Carol said, but they didn’t like hippies, and had never seen Jews. “Where are your horns?” she imagined them asking.

Regarding Clint, Carol confesses, “Neither of us really understand anything about the other person.” They live parallel lives…but they’re still going strong after all these years. Her thoughts on “free love”? “No way.” But Carol loved communal life and sexual experimentation, which is explicitly detailed in her bawdy book. She confessed that she hadn’t considered that with the release of her memoir, the entire town of Deadwood Oregon, and her kids, will know all about her sex life. Favorite memories of commune life include dancing, singing, and making music under the stars. But after accidently setting fire to her roof, she moved from the Oregon wilderness to LA. Her kids went to SMASH and Brentwood Science Magnet. Her son changed his name from Huckleberry back to David.

She still returns to Deadwood for High Holidays, observing Rosh Hashanah with a tarot reading rabbi. It’s “like being in another country inside your country.” Carol explained that the Oregon County Fair is a “Hippie Convention,” offering underground information on the whereabouts of remaining cooperative communities. Some still live on her commune. She finances her mortgage by logging, which she’s learned to look upon “like weeding.” Carol feels very blessed, with an “astoundingly beautiful” garden to return to. Carol points out many “hippie” values remain, like war protests, civil rights, women’s movement and organic food. Their philosophy? “Nobody can tell anyone else what to do.” 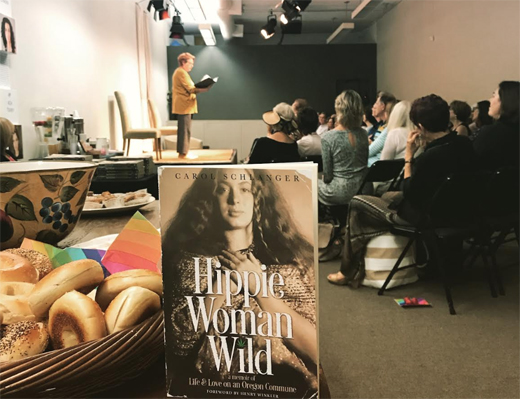 When asked by an audience member if she would like to turn this adventure into a limited series, Carol quipped she wants “Flores Creek” to be an “unlimited series.”The delightful event was capped by a raffle, offering a handmade mezuzah made by Carol’s friend, a beautiful handmade necklace, and a signed copy of Carol’s book. But as great as the Braid event was, I needed more. I bought the book!