Skip to content
CHG CIRCA Celebrates the Art of Ray Caesar and Beau Stanton! 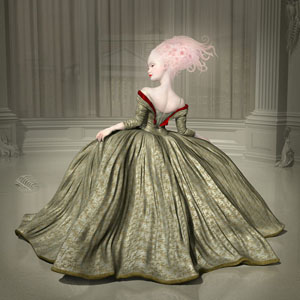 am always intrigued to discover how artists arrive at their creative destination. As with many talented artists, their stories share a demonic character or insurmountable obstacle that has utterly altered their lives. Their art, spawned by deep rooted creativity and originality, takes on a new perspective and actually flourishes from the very tragedy that dared to destroy it.

Artist Ray Caesar has a fascinating and dramatic story. Diagnosed with Dissociative Identity Disorder (DID), previously referred to as multiple personality disorder, the artist has learned to use what some would consider a hindrance as a multifaceted benefit. Emerging triumphant, Caesar has turned his “disability” into a vibrant artistic skill.

Having spent years working in the photography department of the Hospital for Sick Children in Toronto, one can only imagine what experiences have been added to his creative process. His fairytale-esque inspired paintings often blur the lines between the dark side of fantasy and its happy ending. Inspired by surrealists Kahlo and Dali, Caesar’s art is created with the use of Maya (a 3D animation software). The artist has lived many lives…spending 1998 through 2001 working in digital animation for both the television and film industries. His talents earned him a Primetime Emmy Nomination for Outstanding Special Effects in a Series in 1999. Caesar currently resides in Canada.

Also on view at the gallery is Beau Stanton’s new show “Cartography of the Machine.” This will be his solo debut of 14 new multi-media works of art. 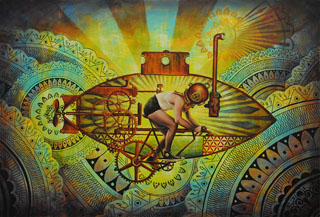 Referred to as ornamental surrealism, Stanton’s work combines a multitude of visuals such as 19th century historical references with his love of architecture. His use of letterpress graphics and vintage imagery offer a retro feel with intricate detail.

Stanton, also a muralist, is inspired by historic buildings. He often starts his process by visiting abandoned areas and photographing out-of-date machinary and collapsing buildings. These images later pop up in his work.