Life is fragile at best. Each person affects another as we travel through this world. For artist Charles Swenson, it was a good friend from art school who left an indelible impression on him. As a result of this association, the artist was inspired to create a body of work entitled the “Sidecar Series.” 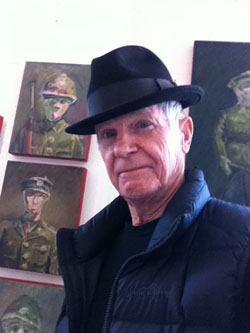 wenson began working on his “Sidecar” series in 2007. He recounts the story that motivated the series. “The sidecar series is based on a little toy that was given to me by my best friend, Michael Haller. We met as kids in art school.”

Mike Haller was a successful production designer working in the film industry. He and Swenson continued their friendship as they grew into adulthood….traveling in the same Hollywood circles. “He and I also used to race sidecars,” says Swenson. “We were the state champions in…. ’76, I think it was…”

Haller passed away about twelve years ago. “The series is a kind of homage to him, a kind of tribute,” reveals Swenson. “He was a very unusual and insightful man and was a real grounding influence for me. He could always see clearly to the core of any problem. I think I was a little untethered there for a while after he died. So this series shows a fantasy version of the two of us…as toys…flying through the sky. I think the paintings have a lyrical, uplifting yet wistful quality as a result…at least I hope they do. Thanks Mike,” sighs Swenson.

Swenson paints on a daily basis at his large studio in the Brewery in Downtown LA. He admits that working on a set schedule keeps him focused. “I know I have a limited time to work, so I don’t tend to waste time…as much,” laughs Swenson. 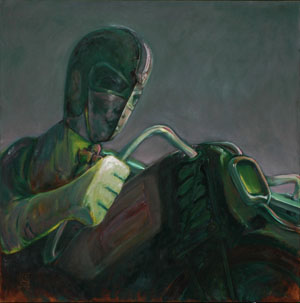 he artist has become involved with much of the happenings at the Brewery, such as bi-annual art walks and special private openings. He confesses that he enjoys being part of an artist community.

“Art is often a very solitary pursuit,” cites Swenson. “It’s just you and your literal or figurative canvas, so it’s very encouraging and enlightening to be able to interact with other artists, see what they are doing, and get input on your own work.”

haleARTS S P A C E is located at Edgemar Center, 2443 Main St. in Santa Monica. The show will remain on view through August 21. http://www.halearts.com/

To find out more about Charles Swenson and upcoming events at the Brewery as well as private showings, see his website at http://charlesgswenson.com/