Skip to content
A Message from Artist Ellwood Risk

This is an incredibly important cause…I wanted you to hear it verbatim from artist Ellwood Risk.

You may have heard from me this time last year about a fund raising event I was participating in for Wounded Wear. (see http://www.woundedwear.org)

By chance, I got connected with retired SEAL Dave Hall by my brother. Dave was working on a project to honor his fallen team mates by firing on a target at 911 yards, with one shot for each of the 79 SEAL Team folks who had lost their lives on the job since 9/11. Having seen my work Dave asked me if I’d be interested in making a piece of art using the target he was going to fire on that would then be auctioned off to raise funds benefiting Wounded Wear which had been started by another SEAL and friend of Daves, Jay Redmond.

Below here….A shot of Dave on the range last year with the target. 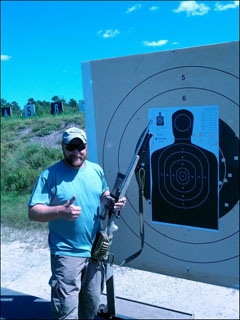 And so, the three of us began to collaborate on this project. In the end we became fast friends and I had the most intense art making experience of my career. Working day in and day out with the names of these young men who had given everything affected me profoundly.

I was unable to attend the fund raising event but my folks went and met with Dave and Jay. My Mom spent a lot of the evening standing by the work and speaking with the family members of the men whose names appeared in the body of the art. She said it was the most emotionally charged experience of her life, and I could understand, and was grateful that she had been the one standing there, speaking with the Mothers of those fallen men.

We had a great deal of positive feed back from those family members and they went out of their way to let my folks know how much they appreciated the gesture of tribute made by Dave and myself. Wounded Wear continues to offer prints of the finished work in several size and price ranges with all proceeds going to the foundation.

Todd and Stephanie Grubbs made the winning bid on the artwork that evening and have been working on a docu-pic about the making of the piece and the affect it has on those who have struggled with the loss of friends and loved ones since 9/11. The link to their Indiegogo page is below along with part of a letter Todd had sent out shortly after hanging the piece in his home.

Any help you can give by way of donations and or, sharing this with your mailing list,
and other forms of social media would be greatly appreciated.

Hope this finds you all doing well in the early part of the new year. Best as always, Woody

Below here, some still shots from my studio footage of the process once Dave had
sent me his tribute target. 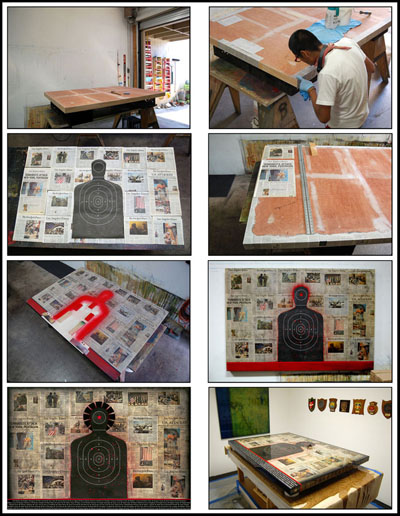 Below here, Todds Indie announcement and an excerpt from last years letter

Dear Friends, I wanted to let you know that I’m working on a Docupic about the making of Until It Hurts and the people it has affected since it was auctioned off at Wounded Wears Toast to the Heroes last Feb.

If you could help by pledging a donation at the Indiegogo link below that would be great. Either way, I’d be most grateful if you could pass this letter along to friends and family and help spread the word.

Attached is a picture of the finger prints of the family members that couldn’t help but touch their loved ones bullet hole or name on UIH while it was on view during the Wounded Wear fund raiser. When I uncrated the piece it had not yet been cleaned from that night. I left the prints until Sunday when I hung the art. I can not put into words what has occurred in me since I bought Until it Hurts. 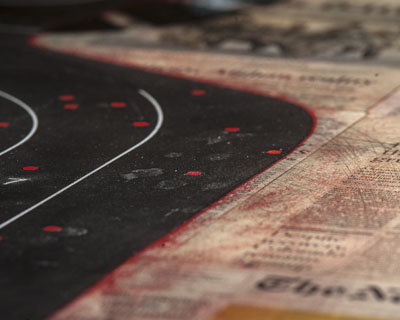 I recently received a message from a guy named Pasquale Sementelli. He lost two friends in 9/11 Joe and John Vigiano, one was a police officer and the other a fireman. Pasquale at the age of 35 quit his job and joined the police force. He served for eight years before he was injured and had to leave the force. His message simply put. I am still angry. Your facebook page of UNTIL it HURTS and your kind words have deeply helped me, thank you.

Thanks for any help you can give in getting this project off the ground, Todd