L.A. Art Party attended the grand opening night gala party of The LA Art Show on Wednesday January 14th at the L.A. Convention Center with much anticipation, and it completely lived up to our hopes. Founded in 1994 with Kim Martindale as general manger, the L.A. Art Show featured hundreds of galleries, thousands of works, and lectures, tours, and special exhibits representing 22 countries.

From the Artists’ Perspective: 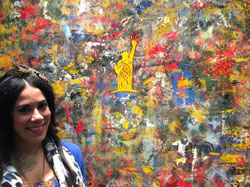 ona Mirzaei, one of the participating artists, reflected: “There was a hybrid of everything from classical masters to 20th century best in show to graffiti art that’s mainstream. I was on cloud nine because of the distinguished honor of having my piece Liberty Blvd Series # 1 exhibited next to Rauschenberg and Basquiat.

This was the first time Mirzaei had the chance to participate in the annual event. She was able to reconnect with galleries that she had been communicating with throughout the years…such as FP Contemporary, Fabien and Castanier Gallery, Turner Gallery, and ACE Gallery.

“There was so much fantastic artwork,” Mirzaei continued. “It makes me feel proud that LA is finally getting a real dose of culture with all our new institutions, additions to various collections, while promoting amazing creativity at the highest level! All of the art was museum quality works and it will be nice to see more international art fairs taking place here to make it more of a world class city!” 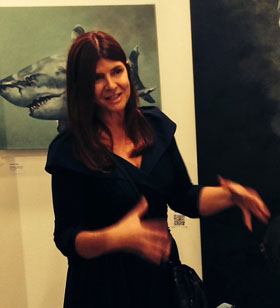 orinne Chaix, another participating artist, said: “This year was my second time showing at the LA Art Show, at the booth of the PYO Gallery LA that featured a selection of artists from different countries with very different genres.” The artist said she enjoyed her experience showing at the LA ART Show, since the show offered large booths and a open, friendly atmosphere. “This gave me the chance to meet with visitors and students, and freely discuss my work, outside of the often intimidating gallery context.”

Some Unique Perspectives This Year:

Ironically, after a 90 minute rush hour freeway drive to get to downtown LA for the show, we happened onto this exhibit: Volvo Cars of North America, LLC. Presented “Relax Mobile Anxiety: A Video Installation by Pascual Sisto Imagines Driving as a Calming Experience.” Volvo collaborated with Media Arts Organization FREEWAVES to commission video artist Pascual Sisto to create an installation that conveys the tranquility that could occur with an automated driving experience.

The United Arab Emirates (UAE) curated a special exhibition that showcased a selection of the country’s top contemporary artists and highlighted the nation as an international hub for culture and art. 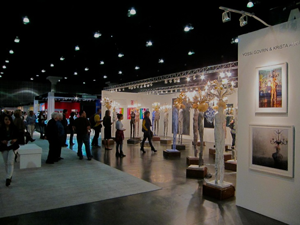 At Timothy Yager Fine Arts, the Nightwatch series consists of sculptures and paintings relating directly to the evolution of human society. Artists Yossi Govrin and Krista Augius create a personal language of forms and ideas that transcend across boundaries of individuals within a larger society.

The sculptures in this series are made of hemp and cement from a single mold was set up in a way that allows the observer to walk among the “individuals” in various group formations to achieve a changing social process of light and shadows.

J.T. Burke’s “The Circus” is a physical and conceptual mash-up of confession booth, cathedral steeple and big top tent. The exterior of the structure is covered with circus posters announcing religious-themed acts, presenting canonical mythology as entertainment spectacle, and the interior of The Circus is darker, featuring symbols, characters and runes of unknown origin in a foreboding environment. 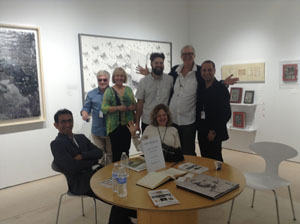 Lawrence Cantor Fine Art of designLAb at the Pacific Design Center commented: “This is my second year as an emerging artist gallery. I was in the fair for many years before it moved to the convention center. I did better than last year; I felt there were more qualified buyers.”

Of course it would be a great disservice not to mention the many fine food and drink sponsors who had booths at the fair. 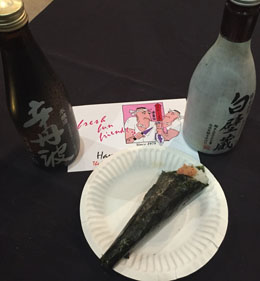