hase Bailey from Orange County, CA, who hosts his own hit cooking show www.chasenyurface.com launches his first cookbook this autumn to raise money to enable other people with autism to follow their dreams.

The official launch takes place at Santa Monica’s popular and award-winning Upper West restaurant in Santa Monica, Ca. on 10th November. Executive Chef Nick Shipp has been a huge fan of Chase since they cooked together at Autism Speaks’ Hollywood Celebrity Chef Gala in 2015. Between them they will be creating a five-course tasting menu based on The Official Chase ‘N Yur Face Cookbook. On hand to film the event will be Joey Travolta with a crew from his Inclusion Films company. The company teaches adults with developmental disabilities the practicalities to film making and many go on to work in major entertainment organizations.

Using part of the book’s proceeds, Chase has decided to set up his own founda 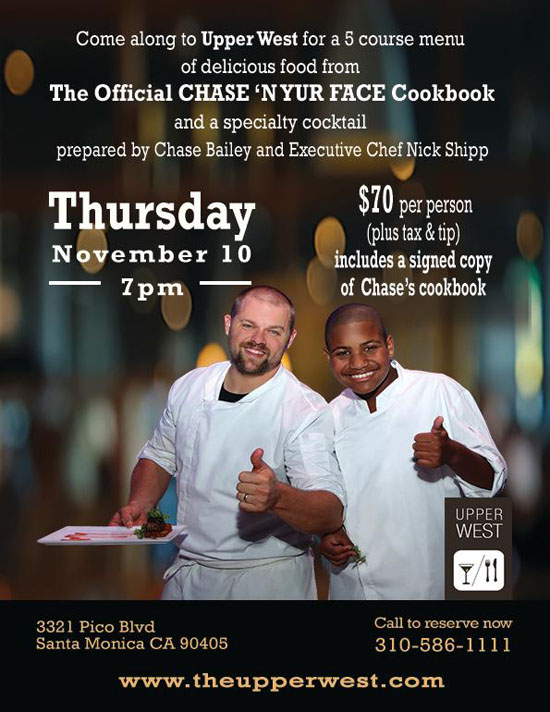 tion, the Chase Yur Dreams Foundation, to assist people with autism who are working towards their dreams of living independently.
Chase’s mom, Mary, takes up the story:

“When Chase was little, he had some serious food aversions, which is common among people with an autism diagnosis. One day I noticed how drawn he was to TV cooking programs. Soon food became his world – he started overcoming his aversions and even started trying exotic foods.”

“The show began simply enough with me filming Chase cooking at home and posting the results on YouTube. People loved it! Chase started inviting chefs and foodies to join him – Roy Choi, Becky Reams, Galia Orme, Anne Scioscia, Fuschia Sumner, and famed chefs Susan Feniger and Mary Sue Milliken are just some of the stars who’ve shared their recipes with him on Chase ‘N Yur Face.”

“I hope people are able to join us on the 10th November to make the event a success and enable Chase to support other people on the spectrum to chase their dreams.”

Tickets for the event, which starts at 7pm, cost $70 (plus tax & tip), and includes a signed copy of Chase’s cookbook plus a gastronomic goody bag. Tickets are available from www.upperwest.com or by calling the restaurant direct on 310-586-1111