panga Canyon Gallery holds an artist reception and award presentation for its 12th Annual Juried Open show this Sunday, January 20th. The exhibition opened on January 9th and was juried by Om Naven Bleicher, director and curator of Bleicher/Golightly in Santa Monica.

This is the first time Bleicher has worked with the galley….I asked him what he looks for in a work of art. He replied, “Psychological work, work tapping into the human condition. I also tend towards work that blends past genre’s and movements that were at odds with each other in the past such as conceptualism and expressionism.

Om has been a juried many shows, so I asked, if there was one mistake that artists can correct….what would that be? Is there something an artist can correct in the next submission? 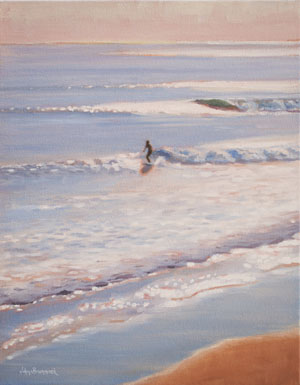 guessing the tastes of the juror and choosing work outside of your usual expertise to match that, he replied. “There were a couple of submissions that I could tell were attempting to be more edgy or contemporary perhaps to match the sort of work I exhibit at my own gallery but it came across as forced and was probably not their strongest work. I tried to be objective in choosing works based on quality in their own domain/medium and not let my personal tastes get in the way too much.”

Arist John Brunnick is one of the lucky ones and has a piece in the show (see image). He paints mostly plein air landscapes with oils.  “I do some larger works in my studio working from smaller paintings, sketches and reference photos,” says Brunnick.

He describes what inspired him to create his featured piece, My inspiration for this painting comes from my love of the ocean and a particularly clear and calm afternoon at my favorite surf spot.” 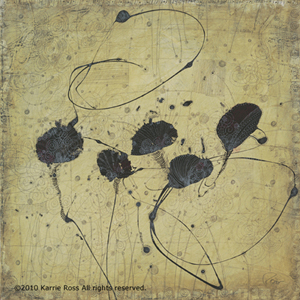 Longtime Topanga Canyon Gallery member, Nancy Williams is part of the committee which planned and worked on the annual juried show. She loves the way the exhbition came together. She eplains, “Om has created an incredible show…this is one of the best juried shows that we have ever had.” Williams says that past juried shows usually bring in 200-300 people.

The work of Karrie Ross will also be on view, this eclectic artist is constantly creating and showing her work. She is excited about being involved in the show. She recently participated in a group show curated by Om Bleicher at his Santa Monica Gallery. 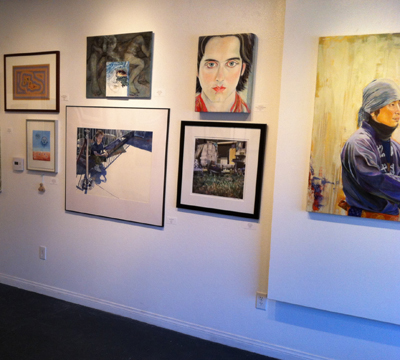 Come on out for a fun art party. Meet the juror, Om Bleicher and the artists and be a part of the award ceremony.