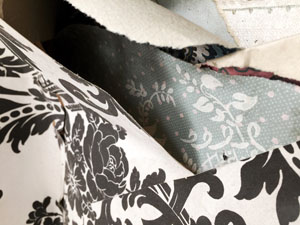 enlighten and transform. With Peeled & Raw, she focuses on fear. A 14-year-old Texas boy proudly brings a clock to school that he made himself. He wants to show his teacher. He is handcuffed and arrested. His name is Ahmed.

More than 100 adults and children are sickened by an outbreak of measles linked to visits to Disneyland. Nearly all are unimmunized. As President Franklin Roosevelt noted, “The only thing we have to fear is fear itself.”

With Peeled & Raw, Dodge allows participants to pick away at her installation, and in doing so shed their own fears.

For more info about the artist, visit www.DaniDodge.com

Check LAArtcore’s website for another opening at the Union Center….http://laartcore.org/

City Garage Theater presents Hamletmachine: The Arab Spring. This is the world premiere of a new version of the seminal work by Heiner Muller that defined post-modern Shak 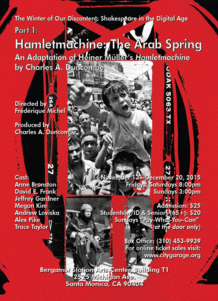 espeare. This jagged, non-linear text breaks open the Hamlet iconography to re-examine the blood-soaked heritage of the 20th century in light of the new reality of Mideast turmoil, global terrorism, and the rise of ISIS.

Two Hamlets wander a bizarre, absurd and devastated political landscape from the fall of Communism to the ascendency of ISIS. Their journey starts as they board the locomotive of the Revolution with mad Uncle Karl at the wheel. Round and round and round they go, at each stop, the bloody disasters of the 20th century, like the stations of the cross for a long-suffering humanity. Thrown from the exploding train, they wander on to meet the ghost of their vengeful father, their Alzheimer’s afflicted mother Gertrude, and finally the fair Ophelia, who has become an Islamic Terrorist. But that’s only the start of their 21st century adventure through the looking glass. They are hounded by religious fundamentalists, plunged into a digital nightmare of new media, diverted by Ophelia as a stripper, experiment with gender roles, conscripted into a Dolce and Gabbana fashion show, then finally launched headlong into the conflicts and tragedies of the Arab Spring, from which they emerge more dazed, confused, and maddened than ever. “Oh, what a noble mind is here o’erthrown,” intones a grief-stricken Horatio. This way madness lies, indeed. But as they stand in the final snowstorm, facing a bottomless sea, they confront the question with which they began: to be or not to be. What answer do they finally offer?

Tickets are usually $25, for general admission and $20 for students and seniors (with ID).  SUNDAYS is pay what you CAN! (I love that!!)

Have a great weekend and remember to enjoy the season!!!    Ho Ho HO….Hey who you calling a ho??