Alberto Bevacqua Studio is proud to present the grand opening party for the 1003 Art Gallery & Lounge at 1003 Abbot Kinney Boulevard in Venice on April 9, from 10am – 3pm, featuring the work of Alberto Bevacqua, Ara Bevacqua, and John Grauman. All of the artists feature metal as a major element of their art, which is entirely fitting, as 1003 is housed at the venerable Venice Metal Worx.

Bevacqua says, “We are excited to be able to create a new gallery in Venice for Venice.”

Alberto Bevacqua is a well known artist and has lived in Venice nearly twenty years. He is known for his fine art photography – large black and white prints of nudes wrapped in steel body ornaments hand formed for each model. He is also well known for his furniture and lighting – considered art pieces as well. For the past twelve years, his studio he shared with his son, Ara, at 334 Sunset Avenue, was a hub of daily activity in Venice, and an addition to the history of the Los Angeles art scene – a place where Richard Diebenkorn, Sam Francis, and May Ray made their prints in the studio of master printer Joe Funk. Alberto’s most recent major sculpture – a 16’ tall hand formed brass piece called “Mika” – was featured in the Water Works II show at the Museum of Art and History in Lancaster, California.

Ara Bevacqua – has focused his creativity on the lost wax technique – crafting exceptionally unique and beautiful art works that function as jewelry as well as art. His mentor has been Brother Jerome Cox. While making yearly sojourns to Italy to study with his mentor, he has created art works for the recent acclaimed Marcel Duchamp exhibition at the Robert Berman Gallery. 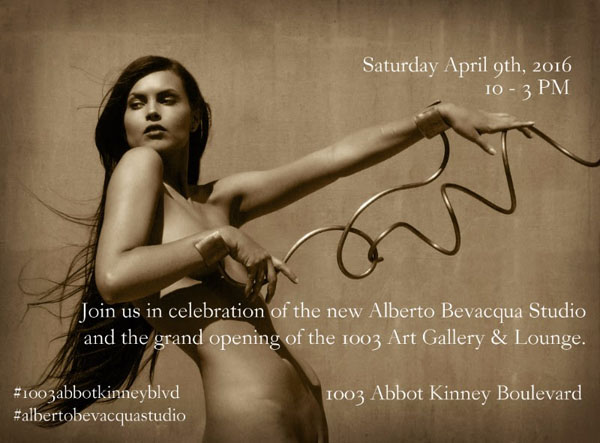 eamed up with Dorie Devari of Devari Design, a Malibu based designer who says, “Alberto Bevacqua is an incredible artist himself and he naturally attracts such amazing artists, it just made sense for us to create a new elegant art gallery on Abbot Kinney with an old school Venice beach vibe that brings fresh blood to the southern California contemporary art scene. Saturday’s at 1003 will be the place to be before art openings this year and for years to come.”

Bevacqua and the 1003 gallery have an amazing slate of exhibits and events planned for the next year. The shows will rotate every 3 weeks. The gallery and lounge will be open to the public every Saturday, 10 – 3PM beginning April 9th, 2016.