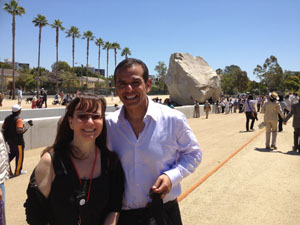 Well LACMA had it’s big day this past Saturday….Levitated Mass opened, and it attracted quite the crowd. See LA Art Party’s FB page for all the photos. There was a ribbon cutting ceremonry and more Quite a day. See pix of the Mayor and myself in front of the Rock!

Pick of the Week takes place this Saturday, June 30th. Koplin Del Rio Gallery holds the official opening reception for two wonderful exhibions. Though they did have a soft opening last week, the artists will be present at this one.  At 5:00 pm the event will feature a brief talk and walk through with artists. 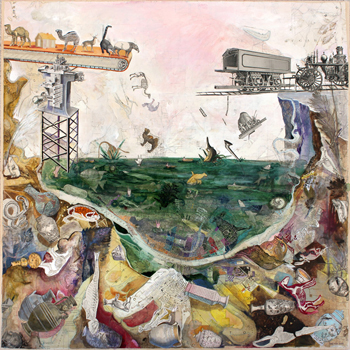 Primarily working in collage, ink, graphite and acrylic on panel, Dorman reposits found treasures, such as topographic maps, and textbook and manual clippings in layers upon his working surface. Dorman deftly builds his surfaces with cutout illustrations from antique books on themes such as engineering, farming, swimming, and botany and his own drawing and painting to create visions that play with notions of space, time, scale, dream worlds, and memory.

Dorman states, “I want my paintings to feel dislocated in time, like they could have been made in 1850 or 2011…I want [viewers] to notice the beauty of a paper map and, not least, recall a time when a human mind and a human hand was needed to translate the planet into something visible”.

Deeply influenced by historic artists such as Breughel, Klee, Redon, Turner and, perhaps most of all, Bosch, Dorman sees the artwork of the past and present in a fluid state, one of the other, with timeless themes such as man vs. nature, mechanical vs. organic, substantive vs. ethereal. 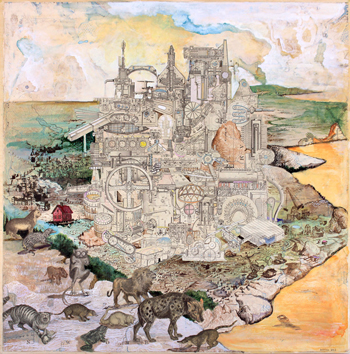 work was recently cited by Maryna Hrushetska (former Executive Director of the Craft and Folk Art Museum, Los Angeles,) as the visual equivalent to the literary genre of Magical Realism due to its embrace of both “a rational view of reality and a depiction of the enigma of reality.”

Josh Dorman lives and works in New York City. He received an undergraduate degree from Skidmore College and an MFA from Queens College in New York. He has exhibited in galleries across the country. His work has been reviewed by the Los Angeles Times, the New York Times, The New Yorker, Art Forum and ArtNews, and is in a number of prestigious private and public collections.

The vigorously animate charcoal drawings depict narratives imbued with a sense of mystery and surrealism, as well as a subtle sense of humor.  The narratives depict backdrops and characters, which would normally appear unremarkable, yet at the artist’s hand they become curious and thought provoking. His newest series titled C (charcoal, coffee and ‘see’) , features a host of subjects toiling away inside an office at mundane and often absurd tasks.

As the viewer recognizes the space as an everyday cubicle, the action depicted begs a closer look. In a piece titled “Hammer” features a cramped office space where the furniture seems to be closing in on a hapless businessman attempting to hang a picture on a wall – only he’s going about it all wrong. Gaping nail holes arch on the wall nonsensically, yet the man seems oblivious to his own folly. 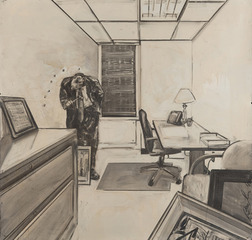 The newest body of work continues to incorporate Bailin’s painterly and gestural application of charcoal on heavily waxed paper, the backgrounds a warm hand dyed sepia tone made through coffee stains, but the interiors have become starker. The mark making remains equally as bold, but the frenetic, repetitive lines have been concentrated and stripped down to near bare elements, Mondrian-like in their severity, while Bailin’s figures break up the grid with unexpected turns of humanity.

David Bailin received his MA from Hunter College in New York and his BFA at the University of Colorado, Boulder.  He has received fellowship awards from the National Endowment for the Arts, and the NEA / Mid-American Arts Alliance, as well as, the Arkansas Art Council.  Bailin was given a solo exhibition in 2000 at the Arkansas Art Center in Little Rock and at the Visual Arts Center at the Washington Pavilion of Arts and Science in Sioux Falls, South Dakota in 2009.

His work has been acquired by a number of public institutions including the Arkansas Art Center Foundation Collection in Little Rock, and Klutznick National Jewish Museum in Washington D.C.  In 2012 he participated in the 54th Annual Delta Exhibition at the Arkansas Art Center and received the prestigious Delta Award. David Bailin currently lives and works in Little Rock, Arkansas.