“At Leisure,” a solo exhibition by Richard Baker, opened at Skidmore Contemporary on October 22, 2016. This is Baker’s second solo exhibition with the gallery. I had a chance to speak with the artist at the opening. 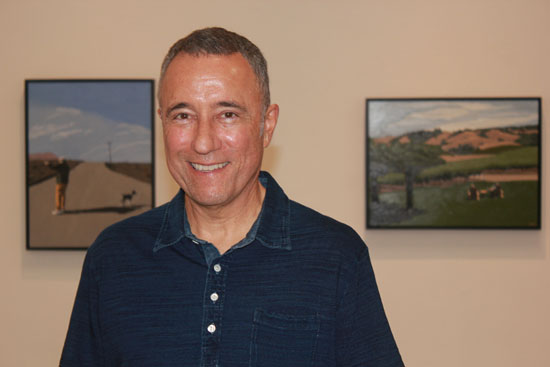 Despite his busy schedule, the accomplished Hollywood manager and producer also tapped into his creative side as a visual artist. Producing both television and movies such as The Drew Carey Show, The Santa Clause trilogy and more, Baker continues to manage actor Tim Allen and is currently the executive producer of the ABC sitcom Last Man Standing. In the past four years, Baker has scaled down his entertainment business to allow more time for his painting. “I was told early on that I had a talent for light and color as an artist,” explained Baker, who said he always wondered what he could create with that talent if he ever had the time to pursue it. 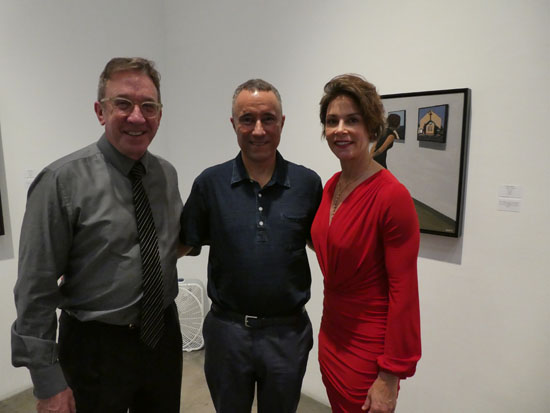 “At Leisure” consists of thirteen paintings. The exhibition features vibrant oils on canvas capturing people in the midst of their lives. “My paintings recreate visual experiences that I have in my everyday travels. If I see something that gives me a visceral punch in the gut, I don’t question it…I just paint it,” revealed Baker.

“At Leisure” celebrates realism while illustrating the beauty of simple everyday activities. It offers the viewer a glimpse into private moments of leisure captured by Baker. His large scale vision (influenced by his producing career) no doubt contributed to his expansive wide angled images. One cannot help but notice his cinematic view. It is evident that the panoramic works of his teacher Rackstraw Downes have also influenced Baker, along with the use of light and shadow. He studied with Downes for three years when he was attending the University of Pennsylvania. 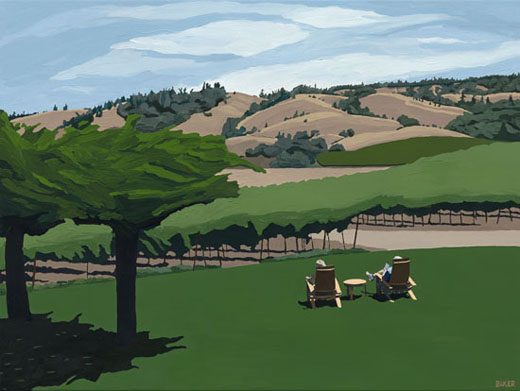 He has followed in the footsteps of his teacher and demonstrated his sensitivity to light, shadow, and color with a vivid result. Recently, he discovered the convenience and ease of creating a work directly from a photo. “My process took a quantum leap in the last few years when I started utilizing my photography instead of painting en plein air.”

Although most of the paintings include characters in motion, others project a lucid stillness with wonderfully warm overtones. The thick strokes of the brush add both texture and richness that beckon to its audience. As a viewer and an extremely busy person myself, the air of serenity that exuded from the work was palpable. Baker’s work is perhaps reflective of his own longing for leisure time…a casualty of today’s fast paced world. 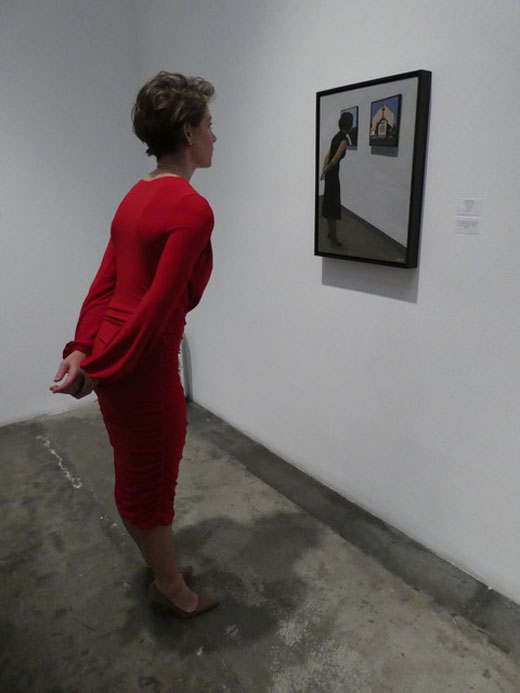 I asked Baker if he knew all the people that were featured in his paintings. He revealed many are friends, relatives and his beloved dog (Caroline) who was included in three of the works in the exhibition. The two people depicted in Enjoying the View were random sun bathers. He revealed that one of the works in “At Leisure” was inspired by last year’s exhibit. On Closer Examination depicts a viewer from last year’s exhibition enjoying Baker’s work from the previous year. It portrays a friend, Jane Allen (wife of Tim Allen and longtime client of Baker’s), admiring one of his paintings at Skidmore Contemporary Art in 2015.

Baker added that being involved in movies and television has been an exhilarating ride, but he is excited to have more time to exercise his artistic muscle and see where his muse takes him. He said he loves working with gallery owner Lia Skidmore, who is both supportive and collaborative. He went on to say he sees his painting as a way of communicating to his viewers how he perceives the world around him. I look forward to seeing more work from this talented artist. 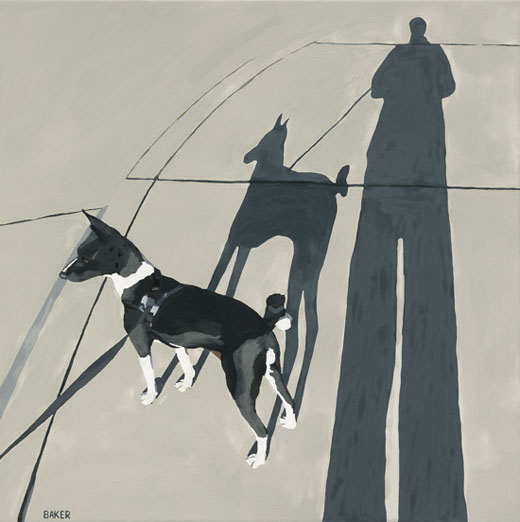 “At Leisure” is on view at Skidmore Contemporary Art, Bergamot Station, 2525 Michigan Avenue #B-4, Santa Monica, CA 90404; The exhibition will remain on view through November 26, 2016; For additional info about the exhibition, visit http://skidmorecontemporaryart.com; More information about the artist can be found on http://richardbakerpaintings.com/