Skip to content
Review: The Rolling Stones Show Why They are the Greatest Rock ‘n’ Roll Band in the World at the Rose Bowl

Before The Rolling Stones took the stage at the Rose Bowl this week, Iron Man himself, Robert Downey Jr. greeted the crowd with an announcement that NASA’s Mars Insight team had named a rock on Mars after the notorious band. “Rolling Stones Rock” rolled about 3 feet, the farthest NASA has observed a rock rolling after landing a spacecraft on another planet. 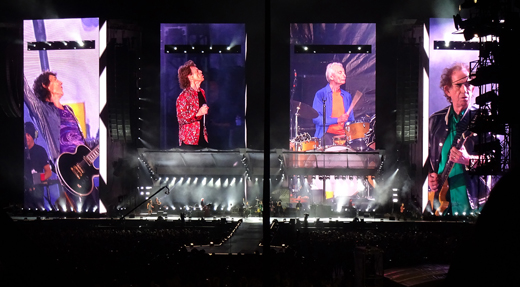 After 25 years, the Rolling Stones return to the Rose Bowl; all photos by Richard Bilow

It was an apt analogy for a band that is truly out of this world. Of course, it is a miracle that the Stones are still together. When the band’s original May date was canceled due to Mick Jagger’s heart surgery, fans had to wonder if that was the end of the band. So, each stop on the tour has been a question of whether the singer and the rest of the band could still deliver the goods as the Greatest Rock ‘n Roll band in the world.

And on August 22nd, at the 90,888-seat Rose Bowl in Pasadena, there was no question about it: The World’s Greatest Rock & Roll Band was the Rolling Stones. Returning to the Rose Bowl for the first time in twenty-five years, The Stones came to make a statement. From the moment Keith strummed the first chord of “Street Fighting Man,” you could feel the energy in the air. As if on a mission, the band dove straight into performances of “Street Fighting Man,” “You Got Me Rocking” and “Tumbling Dice” before Jagger addressed the crowd. Ever the showman, Jagger asked if there was “anybody her from Glendale?” And then he proceeded to list other locales such as Culver City, Santa Monica and the OC. 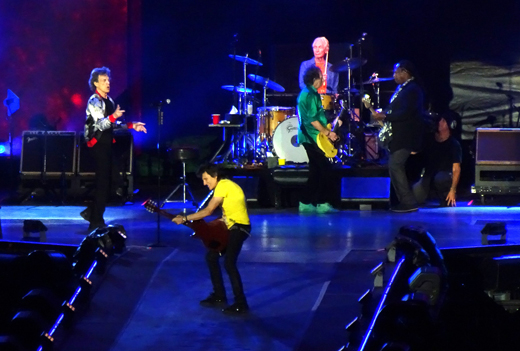 After Jagger finished his chit-chat, the band played “She’s a Rainbow” – the winner of the fan’s request vote which is voted on by fans for each show. Following the audience pick, they played a heavy version of “You Can’t Always Get What You Want” that featured a superb raw guitar solo by Ronnie. And then the core four – singer Jagger, guitarist-singer Keith Richards, drummer Charlie Watts, and guitarist Ronnie Wood walked down a long runway to a smaller secondary stage on the stadium’s floor, where they did acoustic versions of “Sweet Virginia” and “Dead Flowers.”

The core four then returned to the main stage where the band played rollicking versions of “Sympathy for the Devil” and “Honky Tonk Women” where Richards’ guitar seemed to have been turned up to 11, as he wailed through the classic songs. Jagger introduced the band with a handful of random superlatives — Wood was dubbed “the Picasso of Pasadena,” Watts, 78, was announced as drummer and “Greenland’s new economic adviser”. The band were joined by touring bassist Darryl Jones, longtime keyboardist Chuck Leavell, backing vocalists Bernard Fowler and Sasha Allen, horn players Karl Denson, Tim Ries and Matt Clifford. 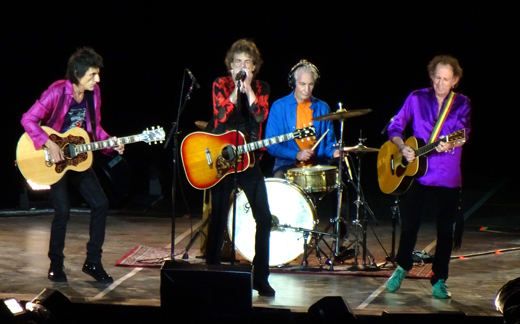 Jagger continued to keep things loose with cracks about the rescheduled date saying, “It’s affected us as well, because we’re missing Thursday night’s turtle races at Brennan’s” (a bar in Marina Del Rey). “Anyway, we walked all the way up and down Hollywood Blvd. looking for the Rolling Stones’ star, but we couldn’t find it. Sad, isn’t it? But we looked.” (The Stones do not have a star on the Walk of Fame.) “And then we couldn’t get into Spago’s restaturant because it was too late.” (The West Hollywood restaurant closed in 2001.) “But it all turned out all right anyway, because Wolfgang Puck is cooking his shepherd’s pies backstage, so it all turned out perfectly.” Now what kind of front man has banter like that – absolutely pure gold!

Then it was time for Keith Richards to take center stage for his customary two songs on vocals, “You Got the Silver” and “Before They Make Me Run” (I was hoping he’d play “Happy” too). Mick returned for a funky version of “Miss You” that featured a superb bass solo from Jones. Then, the band banged out crowd favorites “Paint it Black”, “Midnight Rambler,” “Start Me Up,” “Jumpin’ Jack Flash” and “Brown Sugar.” On “Midnight Rambler,” Jagger brought out his harmonica and reminded everyone of his blues roots and how damn good he is on the harp. Also, Wood really seemed to really enjoy himself on this number and his solo was a lesson in absolute glee. Richards shined on “Brown Sugar” playing the main guitar lick fluidly and flawlessly as saxophonist Karl Denson enhanced the song with a sweet solo. 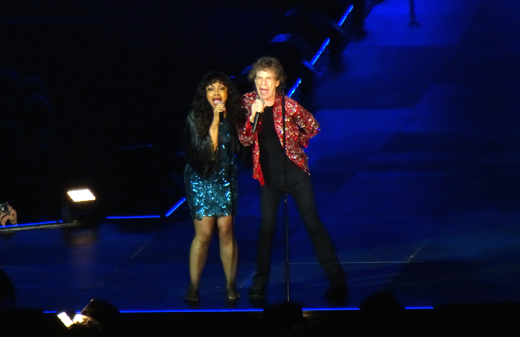 The Stones retuned for a pair of encores starting with “Gimme Shelter which featured backing vocalist Sasha Allen trading verses and howls with Jagger. Appropriately, the band concluded its set with “(I Can’t Get No) Satisfaction” over a beautiful firework display. The song was the band’s first number one in the US and in 2004; Rolling Stone magazine placed the song in the second spot on its list of “The 500 Greatest Songs of All Time”. As the band broke into the opening riff, you could see the long time band mates grinning, laughing and still having a blast after all these years knowing that at this point they’ve got nothing to prove and by just being themselves they are The World’s Greatest Rock ‘n’ Roll Band!