I attended the opening of “Some Things Never Change” by Delfin Finley at the Lora Schlesinger Gallery on Saturday, July 22, 2017. 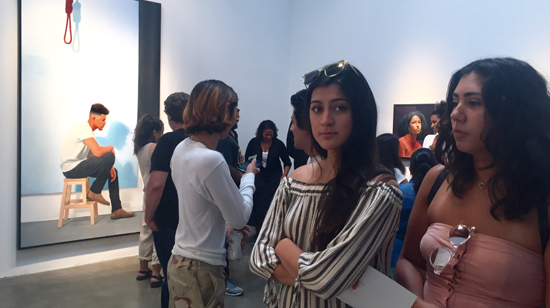 At first look at the work and the crowd, I assumed I was in the wrong gallery. I found myself saying “Is this the Lora Schlesinger Gallery?” The coterie was hip young and from one glance, I could tell they knew each other. A sense of community emanated from these young adults who appeared to be in their early twenties…just like to artist. The work was striking..undeviating portraiture filled with socially charged themes.

A realistic painter, Finley’s work is direct, unfiltered with stylized detail. His subjects are placed in uncompromising situations revealing the reality of everyday life. Some Things Never Change” portrays the continued racism that today’s black men and women are forced to deal with. 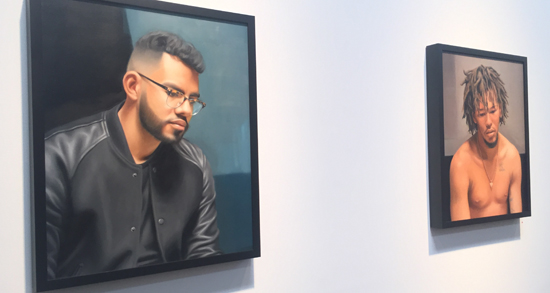 Finley was commissioned by Fucking Awesome (a popular skate board and clothing brand) to paint Dylan Rieder for a board. Reider a renowned skateboarder who died at the age of 28 of complications from leukemia made a huge impact on the skate board community. Other Fucking Amazing subjects used in Finley’s work include Tyler, Earl Sweatshirt, and skater Na-Kel Smith.

I met one of the models at the event named Austin Maddox. She was brimming with pride and had wonderful things to say about the artist. The exhibition features a broad range of today’s abstract culture infused emotional elements…allowing the viewer to embrace his work both individually as as one installation. 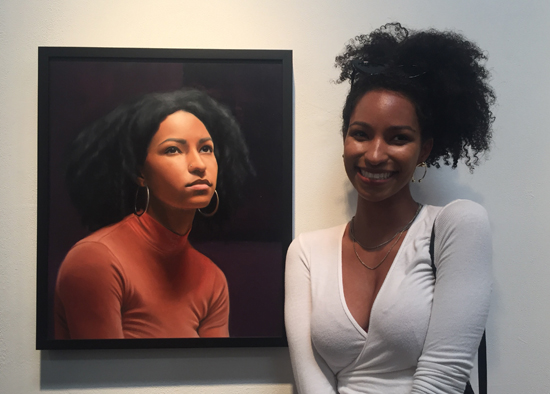