Skip to content
Review: Santana and The Doobie Brothers Double Bill Delight the Crowd at the Hollywood Bowl

A Bay-Area musical doubleheader came to the Hollywood Bowl this week when San Francisco legends Santana dropped in to celebrate several milestones along with San Jose’s The Doobie Brothers. Doobies singer and guitarist Tom Johnston was quoted, “The tour with Santana is a great match. “We’ve known Carlos for many years and we both came out of the Bay Area when we started. Musically, it’s a diverse show. It’s been fun to reunite.” 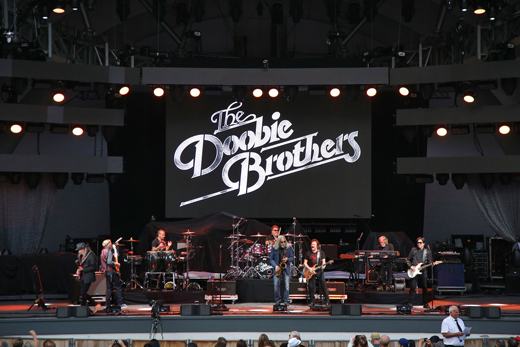 Surrounded by the beautiful Hollywood Hills, it was wonderful to witness. The Doobie Brothers’ hits-laden opening set kicked off with “Rockin’ down the Highway” and included “China Grove,” “Listen to the Music” and “Black Water,” along with deep album cuts from their third record The Captain and Me. The strong 8-piece band displayed amazing enthusiasm which was returned by the ecstatic audience. 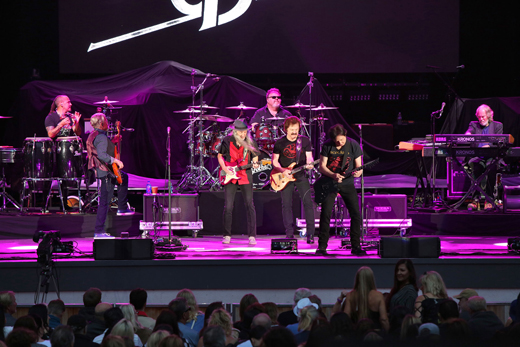 While Santana’s name was on top of the bill, the Doobies clearly played a role in why this show was a sellout. That much was clear from watching the fans dance and sing along to the band’s big hits.

Following intermission which featured images of the Woodstock era and messages of peace and love, the intergenerational diverse crowd was ready for the headliner. 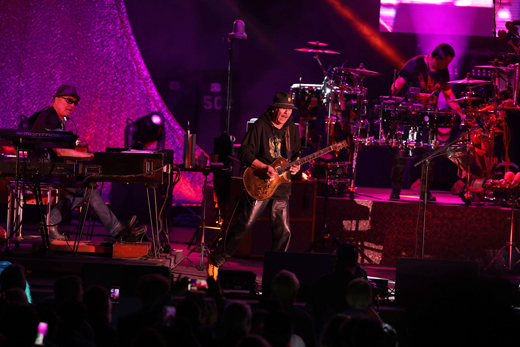 Carlos Santana playing one of the many soulful solos that makes him truly one of a kind.

Santana is honoring several milestones with this tour – the 50th anniversary of the band’s career-making performance at Woodstock, the 20th anniversary of their comeback album Supernatural which earned eight Grammy Awards on the way to selling an estimated 30 million copies worldwide and the release of a new album Africa Speaks which was released last week and debuted at #3 on the Billboard charts. The new, 11-track record was produced by the legendary Rick Rubin and features lyrics in English, Spanish and Yoruba.

The band wasted no time in recognizing their past as the group opened with the Woodstock favorite “Soul Sacrifice,” followed by “Jingo” and “Evil Ways” that included a sampling of John Coltrane’s “A Love Supreme.” After the trip down memory lane, the band shot forward 30 years playing “Yaleo” and “Put Your Lights On” from Supernatural. 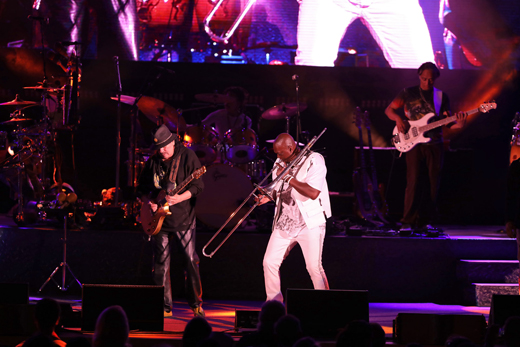 The band’s two-hour plus performance provided a perfect mix of classic Santana numbers as well as more recent songs such as “The Game of Love” and “In Search Of Mona Lisa.” A clear highlight of the evening was when Doobie Pat Simmons joined Santana for “The Calling” a guitar showcase from Supernatural which originally featured Eric Clapton.

As usual, Carlos was incredible on guitar, smiling broadly and full of spirit as he jaunted on stage talking warmly to the crowd and looking at his bandmates – particularly his wife, the incredible drummer Cindy Blackman Santana. It is obvious that Santana loves music and collaborating and enjoys sharing the spotlight with his stellar band that besides his wife includes vocalists Andy Vargas and Ray Green, bassist Benny Rietveld, keyboardist David K Matthews, guitarist/vocalist Tommy Anthony and percussionists Karl Perazzo and Paoli Mejías. 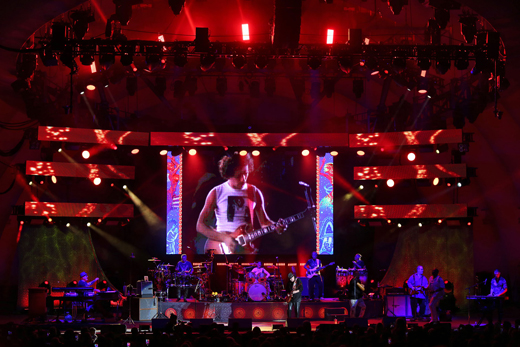 “I feel like a 20-year-old onstage playing with this band, and they deliver on every song,” Carlos Santana said in a statement. “When we hit the stage, we know we will touch your heart and make you dance, sing, cry, laugh and leave your baggage behind. The shows will be well balanced between the hits of yesterday, today and tomorrow…with energy!”

“When you come to a Santana concert — it’s therapeutic,” the band leader remarked to the audience. “It’s like seeing an analyst or a therapist.”

I couldn’t agree more and neither could the delighted Hollywood Bowl crowd. All photos by Randall Michelson Photography