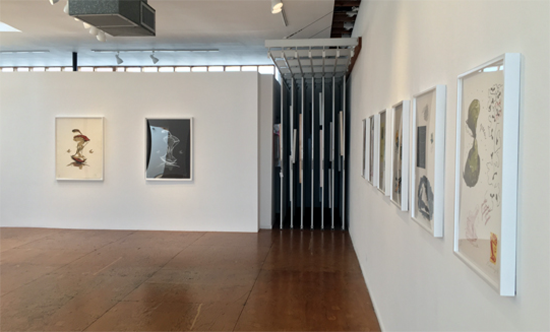 “I am for an art that is political-erotical-mystical, that does something more than sit on its ass in amuseum.” Claus Oldenberg

Walking into the gallery at Gemini G.E.L. on a sunny afternoon recently, one is immediately taken in by the light, gracing the intimate front space with a welcoming optimism. 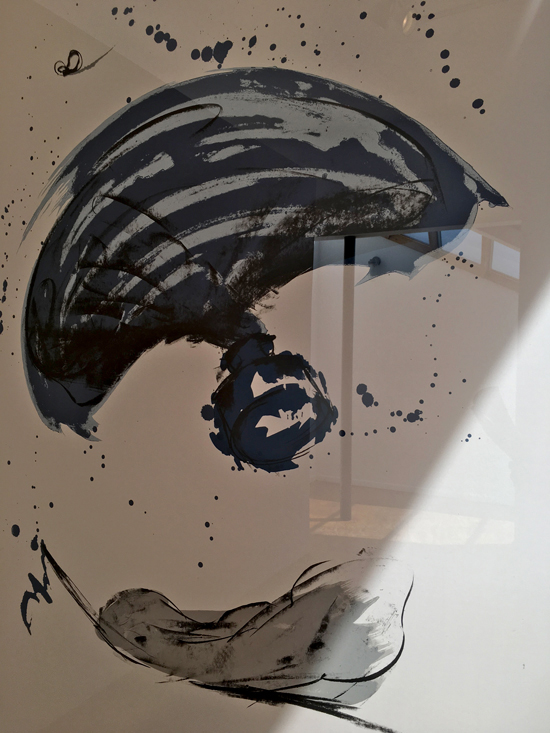 On the wall to your left is a television playing a video from 1969 that opens announcing a “sort of a commercial” with Claus Oldenberg drawing with a stick of charcoal on a large white backdrop. He’s beginning another idea with a quick, sure rendering of a loopy bent screw, bouncing on his toes as he draws the curves.

Oldenberg’s approach to the works – on view at Gemini until May 11 – are decidedly abstract in terms of concept, jumping off up, down or adjacent to another loose yet expertly executed figurative image at the slightest breath of wind. Or whim. 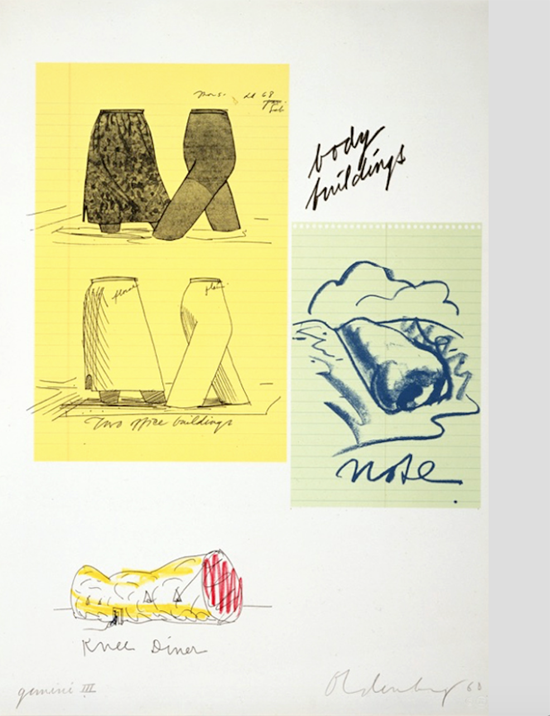 For example Untitled (Body Buildings) from the Notes series, begins top left with trousers rendered blocky as a design concept on lined yellow legal pad. Below is a “knee diner” with pumpkin eyes as windows, the stump portion of the cut off limb rendered in one quick up and down stroke in decisive red crayon. Up to the side is the entrance to the concept building through nostrils backed by fluffy clouds drawn on ripped out lined notebook paper. All this and supporting notes are rendered as a 9 color lithograph with embossing in an edition of 100.

“There was a time when Los Angeles was the world capital of aggrandized objects, but now, even the last of the great Spotted Dogs has disappeared. Common structures, like diners, stole grandeur by imitating zeppelins. Building may be “dressed” in colorful patterns or plainly, depending on the taste and services. Nostrils may serve as tunnel entrances.”

Note for Body Buildings…
As this attempted description makes “clear” these works are not “understood” in the normal sense of looking at an image. They are followed forwards and back, sideways and across the picture plane not along a logical path, but along tangents that move as quickly as quirky synapses. Slowing down is not an option, otherwise you’ll miss the thing just up ahead. 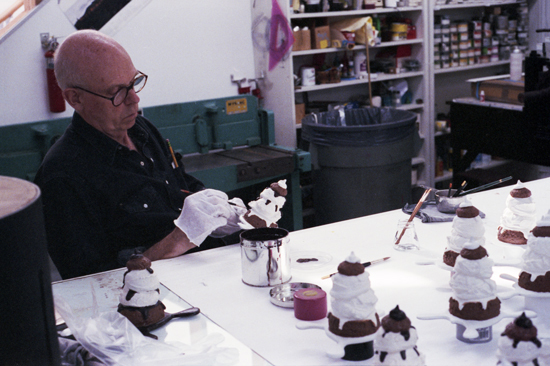 Like a delectable desert, a chocolate covered ice cream of painted cast aluminum with hand painting by the artist. The photographs show a serious artist having fun, getting it just right with a minimum of fuss. His deft facility with chalk, brush, materials, or ideas is derived from we know-not-what. Attempts at characterization or categorization of the individually rendered elements in the works slows and befuddles the mind – one must simply move forward. Feelings of bemused consternation, of observing things used, left and soon to be decayed, repurposed in the meantime filter through the works. 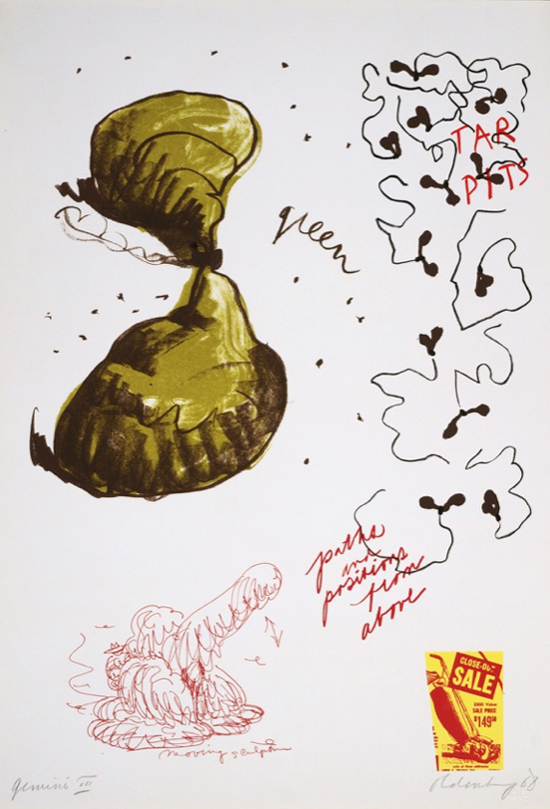 “We were assembled on the steps of the Museum to have our photos taken, and they seemed to be leaving nothing out. Even the manned sweeper was included. It was bigger than any vacuum cleaner I had ever seen, doing its daily sucking on the flagstones to keep the approaches clean. The Museum stands where creatures too large for their own good sank through the asphalt. Associating the memory of these animals with this machine, I arrived at a proposal for a moving sculpture, to ram forever the holy park behind the Museum—a tractor, to which two huge inflated bags are connected (like ears or arms). The operator is hired for his lifetime. He has no other duties besides driving the sculpture. Configurations are left to his whims; he may, if he chooses, create confusion between the bags, trap himself and have to be helped out. The job would pass to his son, to his sons, son, and so on. In its primordial version, the sculpture seems to be combined of road machinery, the hair of a giant sloth and the monumental penis (rising and falling) of one’s great-great-grandfather. Gemini=equals.”

Note for Untitled (Tar Pits)
Oldenberg uses words as he does chalk. Ideas are written in stream of consciousness form, but do not have a forward progression nor direction. One jumps from stone to another, some big, some small, finding different shapes as you forge the stream rushing by. Apples cores, used matches, palm tree shoelaces, and spilled ink with a fly…. 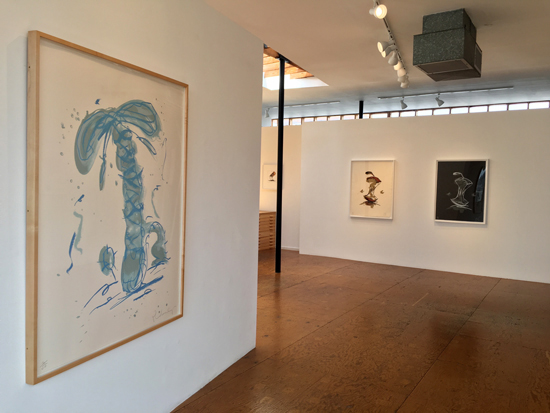 As one walks through, taking in the show one must remember, it won’t remind you of anything or context you’ve seen before. But you’ll remember it on the drive home and for a long time to come.

Juri Koll is a Venice-based artist, curator, writer and filmmaker and the Director of the Venice Institute of Contemporary Art and the Fine Arts Film Festival. He teaches at the Getty Villa, and has written for the New York Times, the Huff Post, FABRIK, and other publications. Koll exhibits extensively; and one of his films was recently selected for the Archives of American Art at the Smithsonian Institution. https://www.veniceica.org/