This week as part of its Jazz at the Bowl series, the Hollywood Bowl presented Neneh Cherry and Ben Harper. It was Cherry’s Hollywood Bowl debut and she made the most of it. The Swedish singer-songwriter and hip-hop artist rose to fame in 1989 with the release of her debut album Raw Like Sushi and its breakout single “Buffalo Stance.” The album was an unorthodox and brilliantly daring blend of R&B, rap, pop, and dance music – a mix that Cherry has continued with the release of her fifth and latest album Broken Politics. Having played intimate release shows in L.A. and Brooklyn for Broken Politics last year, Neneh took her show on the road and the Hollywood Bowl was the last stop. Produced by Kieran Hebden (aka Four Tet), Cherry’s new album is a beautiful, reflective piece of work. She kicked off the Hollywood Bowl show with the high powered “Shot Gun Shack.” The songs from the album have an entrancing groove quality and Cherry’s voice was dazzling, steeped in jazz, forged by punk and tested by hip hop. 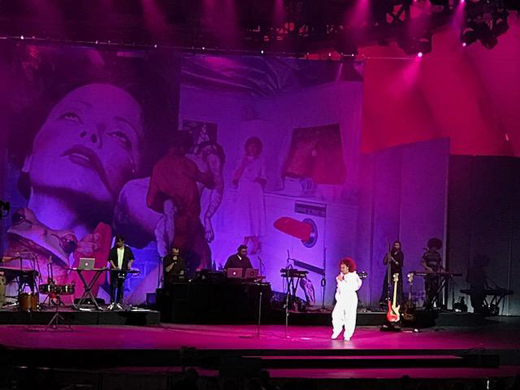 Experimental icon Neneh Cherry makes her debut at the Hollywood Bowl; All photos by Alex Apple

Her band, anchored by husband Cameron McVey was terrific and as expected a little different providing the perfect instrumentation. Besides her husband, it included Preetesh Hirji on Ableton, Samson Srinuan on guitar, bass and synthesizer, John Tonks on Ableton, Electric Drums/percussion, Iona Thomas on vocals, harp, piano and bass and Rosie Bergonzi on vocals, tuned percussion/percussion and piano. Percussionist Rosie Bergonzi was particularly exciting to watch as was harpist/bassist Iona Thomas. Highlights of the show included “Black Monday,” Synchronised Devotion,” and “Soldier.” On “Synchronized Devotion,” she connected the dots between the broken politics of our time and the duty of artists and the rest of us to resist. Of course the focus was on the new album, but Cherry took the audience way back at the end of show concluding with two songs from her debut album – the sublime “Manchild,” and her big hit “Buffalo Stance.” After 5 albums in 30 years, the show demonstrated that Cherry remains an artist on her own terms and one that is constantly evolving and always creative.

Originally, listed as a solo show, Harper showed up on stage with his longtime band the Innocent Criminals. The band opened up with the fan favorite “Gold to Me” from 1995’s Fight for your Mind. The song allowed Harper to set the tone for the evening and let loose with impressive solos on lap steel guitar. 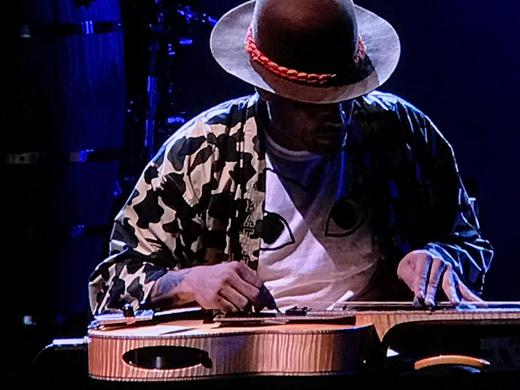 Harper sits down for some pedal steel guitar magic

Harper frequently bounced between instruments throughout the course of the night, trading out the lap steel for his acoustic guitar while always embracing his influences Dylan, Marley, Havens and Hendrix. The one thing that comes across in a Ben Harper performance is his ability to captivate an audience. Of course, he did this through his songs, “Steal My Kisses,” “The Woman in You,” and “Burn One Down,” but also with the stories he shared with the audience. He talked about the challenges of being a father of teenagers and also struggles of being an artist and how thankful he was to be able to perform at the Hollywood Bowl. The developing rapport between Harper and the audience of course led to shouts of “We Love you Ben” from members of audience. Harper was visibly moved as he thanked the audience. 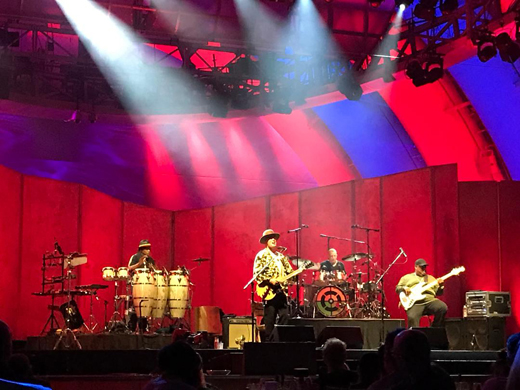 Harper turns the Hollywood Bowl into an intimate venue

It is clear that Harper and his bandmates are very comfortable together. The Innocent Criminals are Leon Mobley on percussion/vocals, Juan Nelson on bass/vocals and Oliver Charles on drums/vocals. Harper was more than willing to share the spotlight with them, most notably during a battle jam with bassist Nelson gripping spectators with a spontaneous back-and-forth. Nelson continued to shine, singing lead vocals on the soulful take of “Them Changes,” prior to joining drummer Charles on backup vocals for a mellow version of “Diamonds on the Inside.” It was also a joy to watch Mobley solo on percussion particularly when he walked around the stage smiling as he banged on his conga drum painted with a Lion.

Other highlights of the set included an impressive pedal steel solo that he said was off an upcoming instrumental album and a pair of sweet covers Jimi Hendrix’s “Machine Gun” and a funky reimagining of Stevie Wonder’s “Superstition,” which saw Harper reworking the song’s iconic horn riff on his lap steel guitar.

When I first heard about this lineup – I thought it was a little odd especially under a Jazz Series. However, I learned that what both of these artists share with jazz is their love of improvising and their ability to remain innovative and creative. Ironically, Harper encored with “Welcome to the Cruel World” and as he waved and walked away, it was amazing to think of the longevity of these two artists. I look forward to hearing and seeing what they do next.