Summer weather is here, which means it’s time for a summer concert. And there is no better place in town to see a show than the John Anson Ford Theatre which has recently completed a renovation. This week, the venue (which many people consider to be one LA’s best kept secrets), hosted one of music’s most unique voices, the ten time Grammy Award nominated, bassist, songwriter, singer, bandleader, and arranger Meshell Ndegeocello. 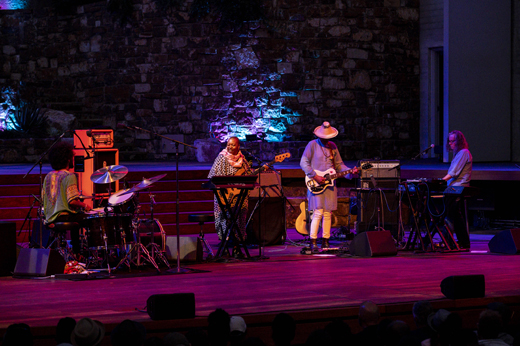 Before the show, the crowd was greeted by the Ford Theatres Executive Director Olga Garay-English who told the crowd to turn to their neighbors and say hello. The crowd seemed delighted with the idea and it was a really nice way to start the night.

Ms. Garay-English also mentioned that Ndegeocello had recently been awarded the annual Herb Alpert Award in the Arts with the panel calling her “a rare constellation in the artistic firmament, whose generosity of spirit defies the confines of genre and whose work dwells in both darkness and deliverance.”

Ndegeocello was in town to promote her new album “Ventriloquism,” as part of the Ford Theatres IGNITE @ the Ford! A series of shows presented by the Ford Theatre Foundation comprised of world-renowned contemporary artists whose work is thought-provoking and reflects the world in which we live. 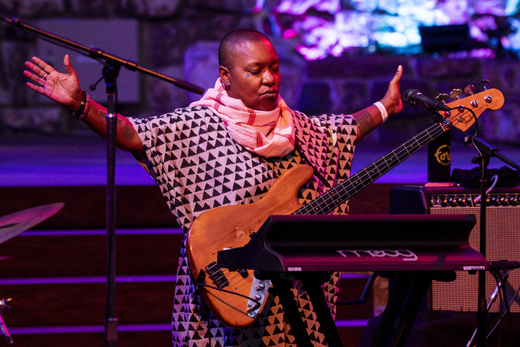 Ndegeocello soaks in the crowd’s love

The new album “Ventriloquism” has the qualities of her work — lush, introspective, imaginative, subversive and sublime. The album may be cover tunes but the way she reimagines these songs is unique and transformative offering a musical refuge during these uncertain times. Its origins came about during a difficult period. As she told Billboard, “I would go to my parents’ house, and my mother’s car radio only played the oldies station. So I just was listening to all the songs I grew up with. I’d be awash in memories. . . those are all the songs I would listen to at my parents’ house to make me feel better.”

Before opening the show with the last two cuts of her Bitter LP, “Wasted Time” and “Grace,” Ndegeocello addressed the crowd by saying that she was nervous – but, that we all have secrets. The audience laughed but was attentive as the band began playing the two slow, moody songs that blended into each other. The Bitter album was inspired by a romantic breakup and they set the tone for the evening – demanding that the audience listen to her lyrics and follow the narrative of her stories.

After the two songs, Meshell told that crowd that she needed to rearrange things on stage because the soundcheck is done with an empty venue. She certainly did not seem nervous speaking to the audience comfortably and honestly as she explained the motivation behind her lyrics. She was backed by her regular partners who also worked on Ventriloquism – Chris Bryce on guitar, Abe Rounds on drums and Jebin Bruni on keys. Of songs the band played from the new album, the crowd gave its biggest cheers to the George Clinton classic “Atomic Dog” and TLC’s “Waterfalls.” 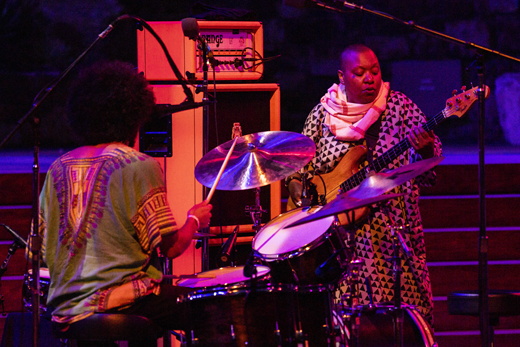 Meshell and her drummer have a special bond

The band was stellar throughout the show and Ndegeocello’s contralto never sounded better. Drummer Abe Rounds was particularly impressive adding harmonies and even singing lead. The subdued version of “Atomic Dog” is typical of Ndegeocello. It would be easy for her funk out on the tune, but instead she strips it down reminding us that the heart of funk is deep and irreverent, not just acted in flashy solos, slaps, or noodling. Similarly, “Waterfalls” was stark and delivered as an honest and personal lament.

The show ended with Nina Simone’s “Four Women” from Ndegeocello’s 10th album Pour une Âme Souveraine: A Dedication to Nina Simone released in 2012. The song is about the tragic bombing death of four young girls in an Alabama church in 1963 just like Simone; Ndegeocello used the song as a means of expressing the country’s agony and injustice during uncertain times. She ended the show by telling the crowd to be kind – a fitting conclusion to a night of moving, powerful, transformative music.