I was very happy when UCLA’s Center for the Art of Performance teamed up with the Theatre at Ace Hotel in downtown Los Angeles. It allowed CAP UCLA to support its eclectic schedule to audiences in a beautiful, iconic 1,600 Spanish-Gothic venue. The theater was originally the flagship theater for the United Artists studio and in 2014 Ace cut the ribbon on The Theatre at Ace Hotel. 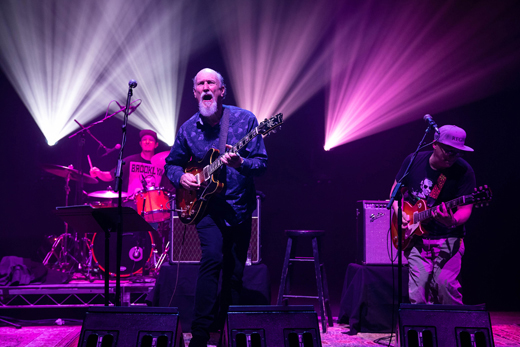 As always, this year’s CAP UCLA schedule provides an adventurous collaborative selection of contemporary performing arts in all disciplines. The one event that really spiked my curiosity was An Evening with Lettuce & John Scofield.

As a huge fan of Miles Davis, I have followed John Scofield’s career since he played in the 1980s band and I try to see him live as often as I can. But, who was this band Lettuce? I was startled to learn that they have been around for 20 years. I found out that the band members are huge fans of Miles and named their most recent tune “Witches Stew” in tribute, and that the drummer, Adam Dietch, played on Scofield’s awesome Überjam album. Also, Scofield appeared as a special guest on the band’s 2002 debut album Outta Here, and they’ve played together over the years.

As I dug deeper and started listening to their music which streams for free on the Lettuce website, I found out that Lettuce got together in 1992 while still in their teens. The guys were attending a summer program at Boston’s Berklee College of Music and were drawn together by a mutual love of Earth Wind & Fire, Tower of Power, and jazz-funk acts like Headhunters. In 1994 upon returning to Berklee as undergrads, the band put together a live set, and members went door to door at jazz clubs asking owners to “let us play.” Hence, the name Lettuce. 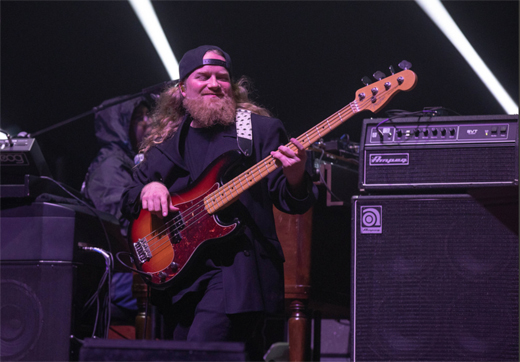 The show at the Ace Theatre was the first show of a west coast run of collaborative shows between the musicians. Lettuce kicked off a little after 8pm with their song “The Force,” an incredibly groovy tune that showed off saxophonist Ryan Zoidis world class chops and got people out of their seats as crowds of dancers began to form on both sides of the stage. Over the course of the first four songs, each of the members got a chance to demonstrate their virtuosity. It was clear that there brilliant blend of musicianship and funk leads to a rare occurrence in jazz – dancing! Throughout the night, Lettuce continued to draw attendees out of their seats as each member showed off their skills – trumpeter Eric ‘Benny’ Bloom blasted away on “Blast Off,” while guitarist Adam Smirnoff and keyboardist Nigel Hall tended to a sonic garden on “Madison Square.”

Of course, the main reason for that dancing is the band’s rhythm section. Drummer Adam Deitch and bassist Erick ‘Jesus’ Coomes are exceptionally talented, but it is Coomes who is the main focal point of the band. He stands in the center of the stage with his great hair and beard, jumping around and smiling, all while playing infectious grooves that never stops.

Scofield joined for the fifth song as the band started playing his song “What You See is What You Get.” Up to this point, the show had been a non-stop funk fest. With the addition of Scofield, the sound shifted a little – with less funk and more jam. For the rest of the show, Scofield’s unique sound filled the theater. It was obvious that Scofield and the band are big fans of each other with Scofield shouting “Lettuce – the best band in the world,” and several members of Lettuce yelling back praises for Scofield. After the love fest, the band shifted into Scofield’s “Jungle Fiction” – a highlight for drummer Dietch who demonstrated his deft technique and dexterity. 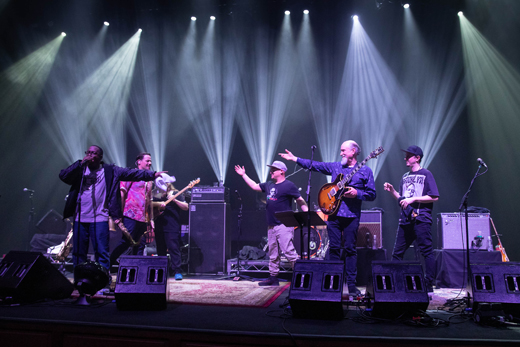 Keyboardist Hall introduced the next tune “Kron Dutch” from the Live in Tokyo album as his favorite. As the band kicked in, you could hear bass player Coomes say “let’s play the weird stuff.” What followed was a spacey jam with Scofield showing that he truly plays guitar like no one else. The band returned for Scofield’s tune “Ladies Night.” Guitarist Smirnoff laid down the funky rhythm, as Scofield, Bloom and Zoidis traded solos. By this time, the two dancing parties on the side of the stage had coalesced into one big mob at the front of the stage. Most had been dancing for almost two hours. Still, there energy had not waned. The crowd applauded loudly as the seven amazing musicians waved goodbye and took their bows. Everyone in the crowd left with a smile and a funky good time.